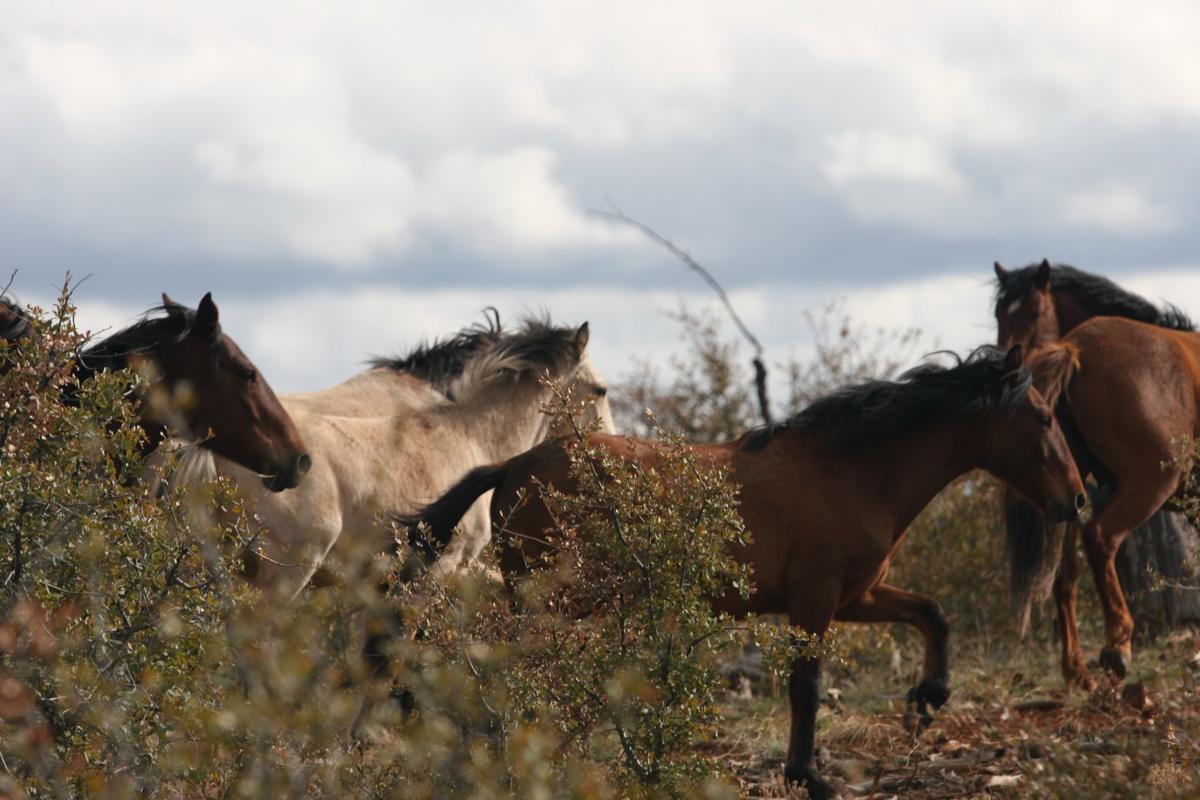 A herd of Heber Wild Horses moves through the forest in the Black Mesa Ranger District. 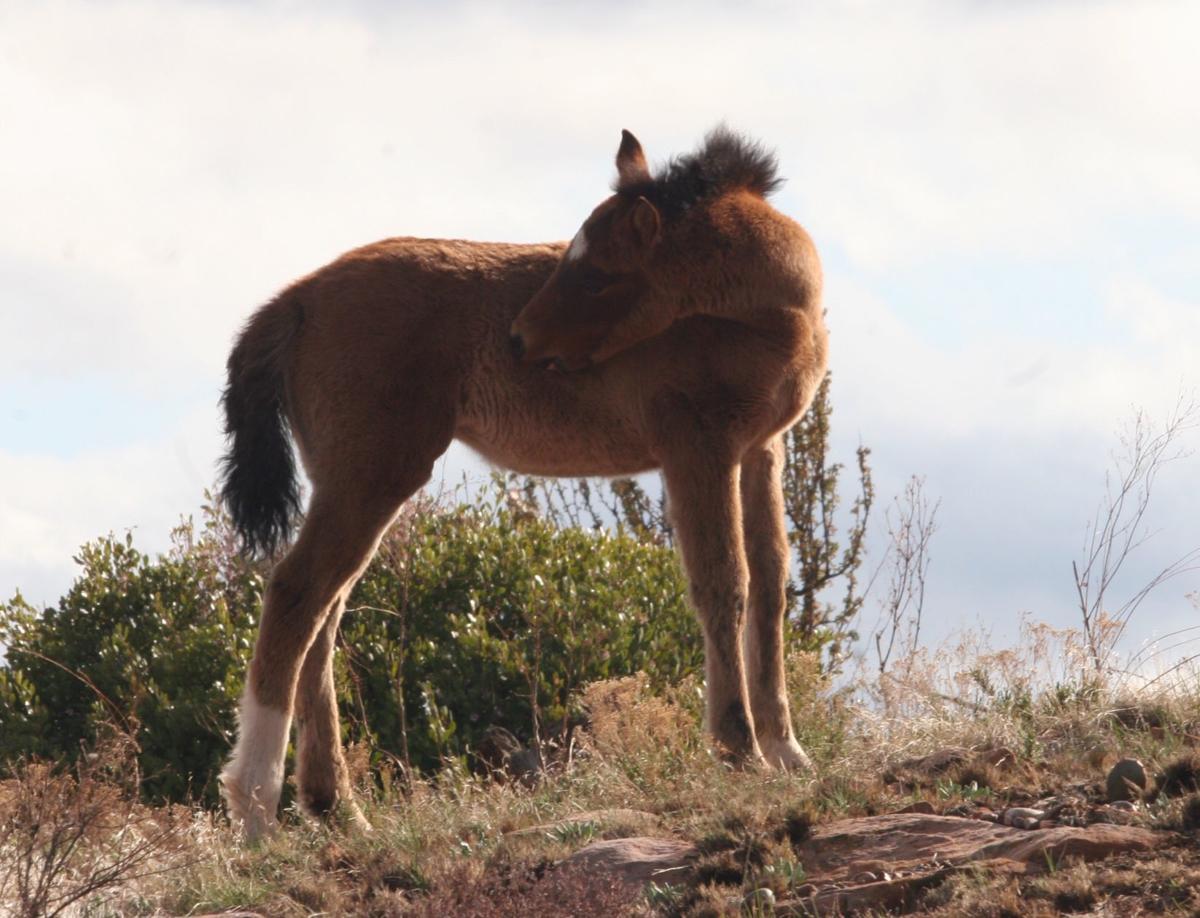 A spring foal scratches himself while grazing along a mesa in the Heber Wild Horse Territory in the Black Mesa Ranger District of the Apache-Sitgreaves National Forests. 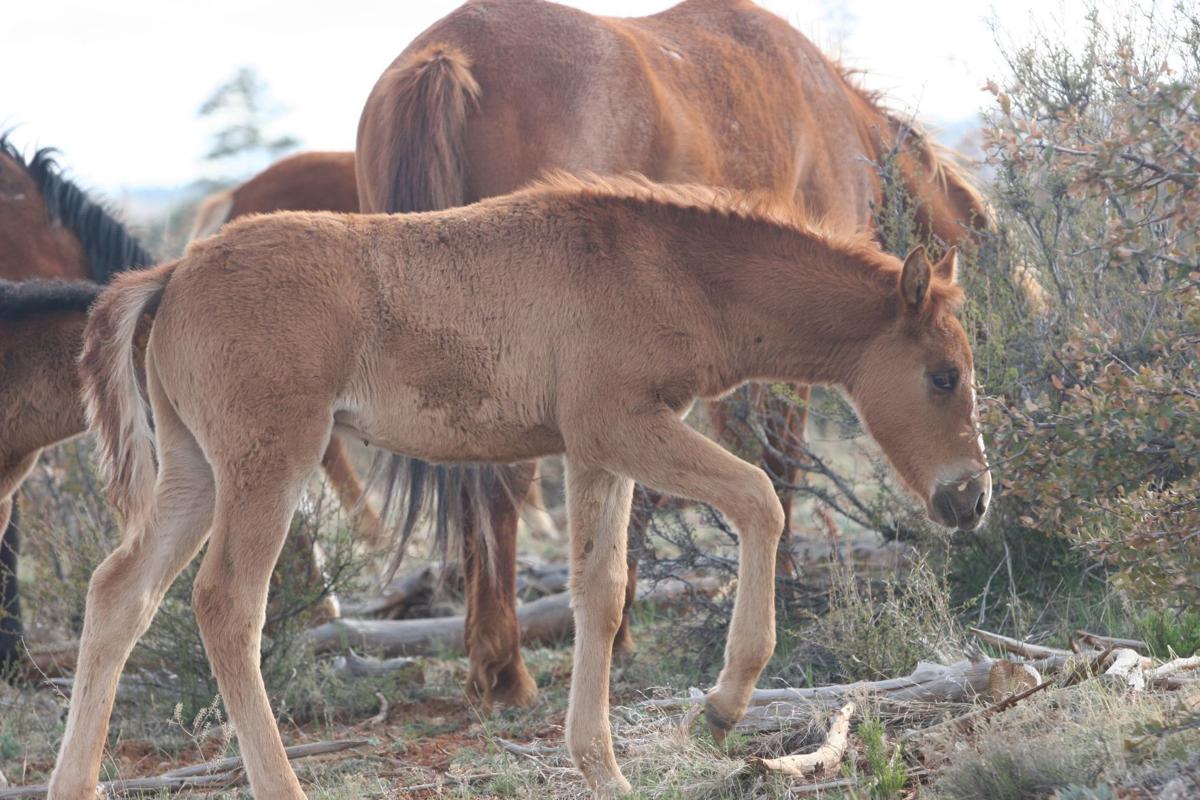 A Heber Wild Horse foal roams alongside his herd.

SPRINGERVILLE -  March 16 marked the closure of the first public comment period regarding the Heber Wild Horse Territory (HWHT) Management Plan draft. The Forest Service is now reviewing the comments as part of the required process in developing a management plan for the herds living on 19,700 acres in the Black Mesa Ranger District on the Apache-Sitgreaves National Forests.

Developing a management plan for the free-roaming horses is the long-awaited result of the 2007 litigation initiated by horse advocates to halt a proposed round-up of horses on the Apache-Sitgreaves National Forests.  At that time, the Heber Wild Horses were afforded protection under the Wild, Free Roaming Horses and Burros Act of 1971.  This legal action included a stipulation that the Forest Service “collaboratively engage the public to complete a territory management plan for the Heber Wild Horse Territory,” according to an earlier press release from the US Forest Service.

The finalized management plan will “guide future management of the horses and their habitat, including setting an appropriate management level of wild free-roaming horses for the territory,” says the Forest Service in previous press releases.

In 2017-2018, the ASNF also enlisted the help of Arizona State University and a professional facilitation company to lead a collaborative work group. They made written recommendations to the Forest Service for the Heber Wild Horse management plan. The Forest Service developed the plan draft, in part, from recommendations of the collaborative work group.

The draft recommends a horse population in the range of 50 to 104 horses which is more than triple the number of horses observed in an April 2017 population count cited on page 5 of the management plan draft.

The distinction between horses inside and outside the territory is also controversial because the horses are permitted ingress/egress on the Apache-Sitgreaves Nationals Forests when gates are open.

If the plan is finalized with a recommended population of 40-104 animals, the herd will need to be reduced significantly in order to be in line with the management plan.

An updated horse count will have to be conducted once the management plan is finalized. This would be accomplished through “ground surveys, aerial surveys, global positioning system collars, and when possible, partnerships, to determine population numbers,” explains Ellsworth.

To see a copy of the the draft visit the Apache-Sitgreaves National Forests webpage:

The Heber Wild Horses have been the source of controversy for many years, with a diverse group of stakeholders advocating for, or against the horses for significantly different reasons.

When the horses were found dead in the forest as a result of gunshot wounds, pressure on the Forest Service to draft a management plan intensified.

The shooting deaths were confirmed for at least 24 federally protected Heber Wild Horses on the ASNF. Despite a 15-month ongoing investigation by the Law Enforcement and Investigations (LEI) division of the Forest Service, no suspect(s) has been named even after the killings became more frequent in early 2020 with 15 dead horses found between Jan. 9-12.

To date, no suspects have been named.

Member groups that I work with have submitted thorough comments on what is being proposed, although the details are remarkably lacking. It is our hope that science prevails on this issue and that a BALANCED FOREST is the end result. The horse advocates have no idea as to the destruction of habitat and waters that the feral horses have caused. Surveys are desperately needed to show the massive growth of feral horses and the declining numbers of all other species.

Exactly. Horse advocates also will not set a population limit and how over populated horses will be culled.