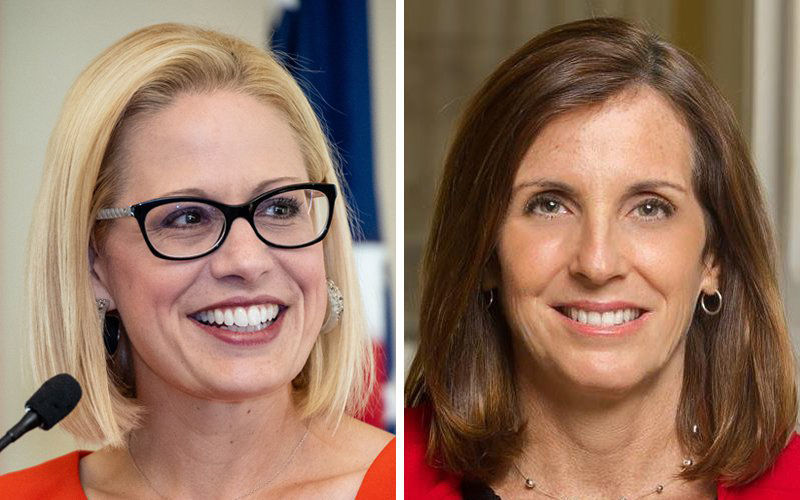 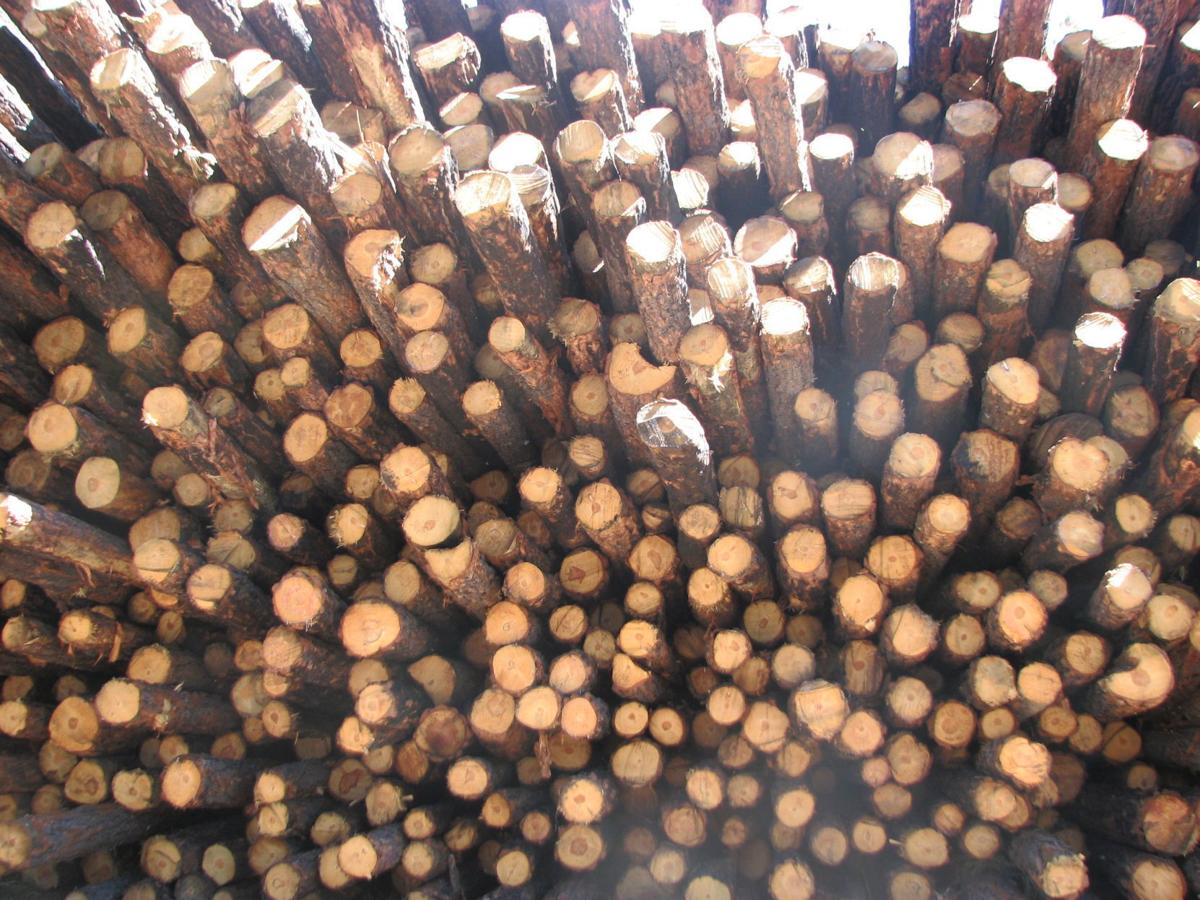 The key to the success of forest restoration efforts relies on finding an economic use for millions of small-diameter logs like these.

Arizona’s two new US Senators have reached across the aisle to demand the US Forest Service save the faltering 4-Forests Restoration Initiative (4FRI), the best hope of preventing a California-style catastrophe in Northern Arizona.

The 4FRI approach once united the Forest Service, local officials, loggers and environmental groups. They all agreed on the urgent need to remove thickets of small trees left by a century of mismanagement while leaving the remaining, fire-resistant old growth trees in place. The Forest Service in 2012 awarded a contract intended to thin 300,000 acres in 10 years. However, the 4FRI contractors have thinned just 12,000 acres.

Sen. Sinema said the “Phase 2 RFP offers the Forest Service an opportunity to learn from past mistakes and get 4FRI back on track.”

She noted that Congress in 2018 doubled the length of contracts from 10 years to 20 years, “which will provide the industry with greater certainty when investing in large, landscape-scale restoration projects. The time is right for the Forest Service to develop an RFP that is designed to build, attract and empower industry to accelerate the removal of low-value timber from our fire-prone forests. We ask the Forest Service to engage and remain engaged with state and local stakeholders in the crafting of the RFP as well as their consulting during the review and award process.”

The Forest Service is in the midst of approving detailed plans to thin and restore an additional 1.24 million acres along the Mogollon Rim near Happy Jack, Payson, Young, Heber-Overgaard, Show Low and Pinetop-Lakeside. The projects would generally reduce tree densities from 500 to 1,000 per acre to more like 100 per acre along vast stretches. However, loggers have treated only a fraction of the acreage approved years ago in phase one. That means it could take years to get around to the forested areas in the Rim Country Project.

The strong letter from Arizona’s two US Senators stemmed from years of lobbying by local officials and environmental groups. 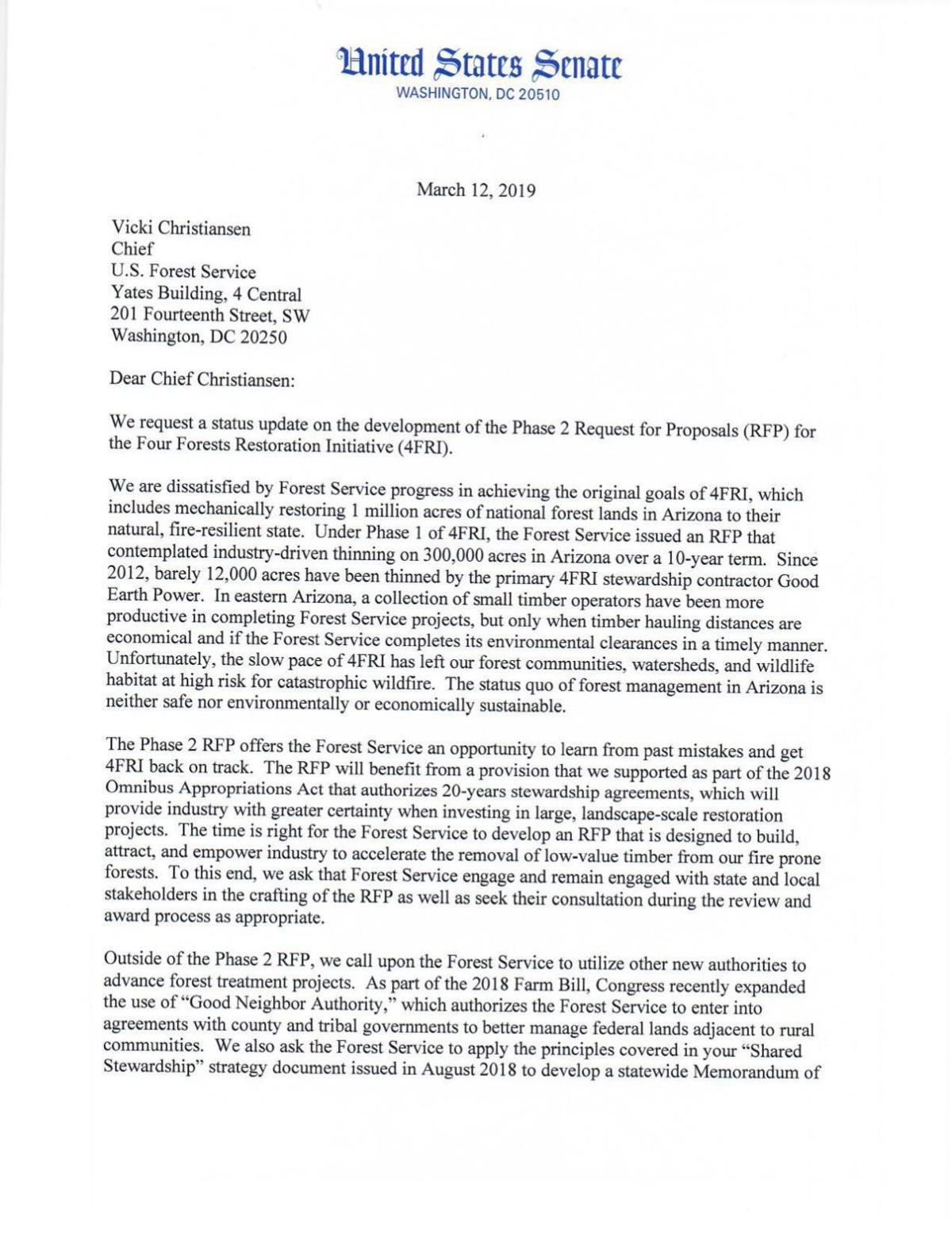 Pascal Berlioux of the Eastern Arizona Counties Association has been active in the 4FRI Stakeholders Group for years. He is pleased with the letter.

“I think it is very positive to have two new senators involved in 4FRI … I think they understand that we have a continous uphill battle to get 4FRI implemented … it’s positive to see them getting engaged in this issue,” he said.

Just how much effect the letter might have on the Forest Service, he could not predict. Rquests for Proposals for from forestry businesses for the Rim Country portion of the 4FRI project are projected to be released in May. “We’ll have to wait and see what effect it may have on the RFP,” he said.

“Thank you to Senators McSally and Sinema for working with us and supporting our request that the State and local governments be included in the process of the new RFP. Fire and water are too important to all Arizonans and we cannot afford to repeat the mistakes of the past,” said Jason Whiting, a member of the Navajo County Board of Supervisors, and a co-chair of the 4FRI Stakeholders Group.

Local officials have criticized the Forest Service for entering into unrealistic, unfulfilled contracts with a sequence of contractors, most recently Good Earth Power. Those bids were often based on speculative and untested plans to turn the millions of tons of wood scrap and small trees into exotic products like jet fuel. The contractors have failed to get the financing to build the new mills and wood processing operations necessary to turn a profit on the biomass thinning operations produce. The 4FRI contracts require the loggers to not only remove and mill the small trees, but also the millions of tons of brush, wood slash and biomass that often costs more to haul and process than it’s worth.

The cutoff nearly doomed the fledgling wood products industry in the White Mountains. The Eastern Arizona Counties Association has been battling to convince the Forest Service to open 4FRI contracts to all bidders, hoping to save the struggling mills in the White Mountains and accelerate thinning.

The group won a major victory earlier this year when the Arizona Corporation Commission agreed to consider requiring power companies like Arizona Public Service to buy power produced by biomass power plants. This would create a market for the low-value wood slash that has bedeviled 4FRI contractors.

The 4FRI approach has yielded important benefits, including forging a consensus among loggers, local officials and environmentalists that has broken the political logjam that had tangled forest management in lawsuits and confusion. Moreover, the Forest Service used the 4FRI consensus to undertake environmental analysis on 100,000 acres at a time, dramatically streamlining the process of approving restoration timber sales.

However, problems with transportation, consistent contracts and markets for the wood slash has essentially stalled 4FRI for nearly a decade. Most of the acreage the Forest Service claims as “treated” stemmed from managing naturally caused wildfires during the cool, wet months of the year. The White Mountains Stewardship groups have completed more restoration thinning projects than the official 4FRI contractors. The earlier White Mountains Stewardship program thinned buffer zones around Alpine and Springerville widely credited with saving those communities from the Wallow Fire, the largest wildfire in state history.

The Payson Ranger District of the Tonto National Forest has in the past 10 years thinned approximately 50,000 acres around Rim Country communities, mostly relying on year-end grants from the Forest Service. Those projects cleared brush and tree thickets, then burned the slash rather than selling the wood to timber companies.

A dramatic increase in high-intensity wildfires has gained national attention. The National Interagency Fire Center reports that wildfires burned 10 million acres in 2017 and 9 million acres in 2018. The fires have become far more destructive, including a succession of the most deadly and damaging fires in California history in the past two years. The Camp Fire in November killed 88 people and destroyed 19,000 structures. Wildfires now inflict billions of dollars in damage every year and cost the Forest Service about $2 billion annually to fight.

Thinning 1 million acres without selling the timber would cost about $1 billion.

WHITE MOUNTAINS — Newly-appointed U.S. Senator Martha McSally visited Apache and Navajo counties on Tuesday as part of her planned tour to all…

This is a result of all the years of allowing those who have NO idea on how to deal with a wilderness to be in charge of a wilderness area/s. Tell the fed's to bug off & get in there to clean out the forests & turn over the excess wood to the biomass power generator.

Amen! Unless it's just old age talking, I remember as a child that cattle were grazed in the forests, the undergrowth was controlled, fertilizer was applied and any fires were over with pretty quickly.

Cattle grazing was a major contributor to the problem we have now, cattle reduced grass competition for seedlings, allowing more trees to reach sapling/overstory size. Also, grass was not present to carry low intensity fires across the landscape killing seedlings and preventing overstocking of overstory trees. Also, "undergrowth" is not the problem, overstocked mature trees (40-140 years old) are. And they have slurry for putting out fires now, so no need to use expensive fertilizer?

First, "wilderness" is a designation of land by congress and has different management rules and regulations than forested land. Second, the FS is supplying the biomass plant with all they can handle. Supply is obviously not the problem, demand is.