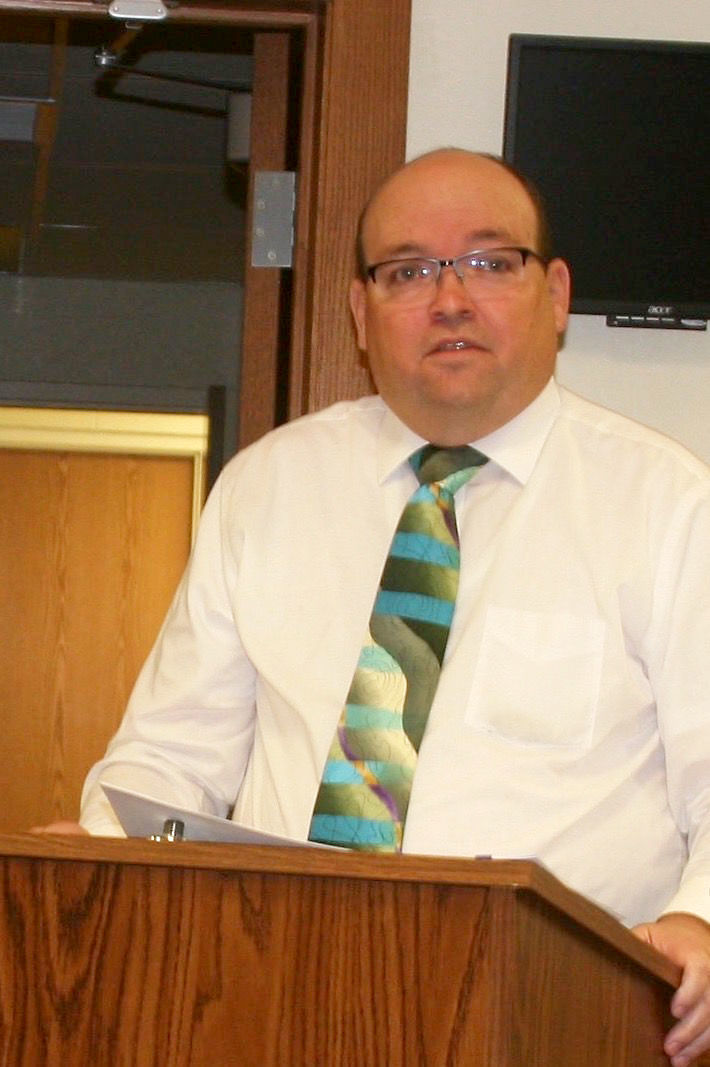 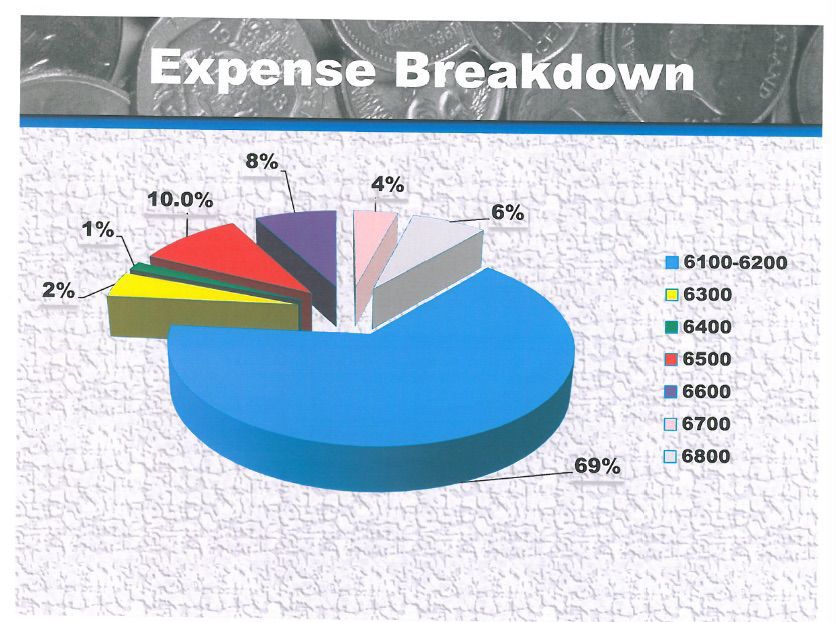 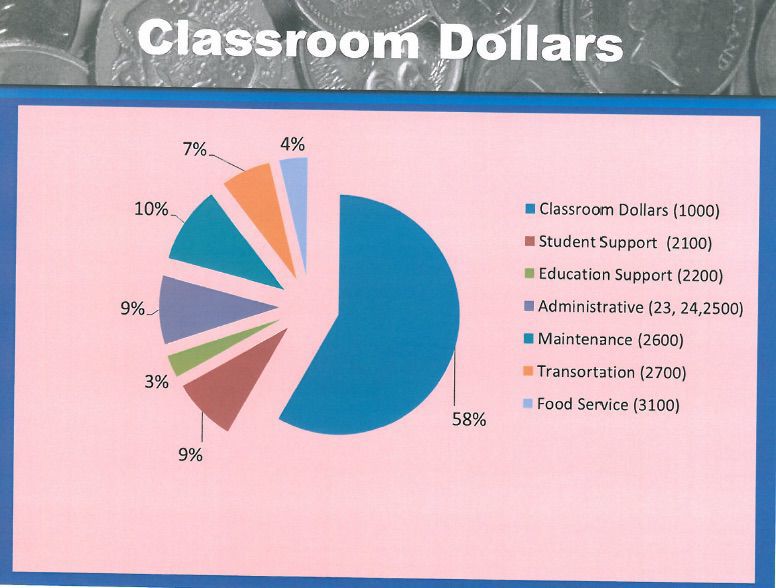 Classroom Dollars break out information. 58% of the budget goes directly into the classroom. 10% is for maintenance. 9% goes to student support and a matching 9% goes to administrative costs. 7% is for transportation, followed by 4% for food service. The final 3% goes to education support.

Overall the the district is performing well based on the information provided. “It was a good year; it was a big year,” said Ollerton. “In addition to the money the RedforEd# movement garnered for teacher salaries, revenues are up.”

“The district’s average daily membership (ADM) stayed fairly level compared to the prior year which is good in the era of current-year funding,” explains Ollerton. ADM is a determining factor in setting funding levels and are part of the state revenue formulas for public schools.

“Sixty two percent of the district’s revenue comes from the State Equalization since the tax rate necessary to fund the formulas is greater than the qualifying tax rate,” he said. Ollerton further explains how State Equalization is provided in order to keep this portion of local property taxes uniform throughout Arizona. “We are dependent upon the state for contributing to a significant part of our revenue,” he adds.

The district serves approximately 2,500 students with 118 certified teachers. The district also has four long-term substitutes filling teaching positions which totals 122 full time employees (FTE) working as teachers, Ollerton stated during his presentation to the board.

The district was recently audited by an outside firm that is sub-contracted and reports directly to the Auditor General and the Arizona Department of Education..

The district’s financial records were “looked at by our auditors this week,” Ollerton informed the board.

“The auditors had to look really hard to find anything to question,” commented Superintendent Hollis Merrell in regard to the review.

The district is continually making changes to automate processes and improve internal controls. Implementation of InTouch Receipting is one of the newest changes.

“In response to a desire for the district’s patrons to use alternative forms of payments such as credit and debit cards, the district implemented InTouch Receipting,” says Ollerton. In Touch is basically a point-of-sale software that allows the district to collect student fees and produce receipts.

Parents or students can come in and pay extracurricular fees, class fees of all types or purchase football or volleyball game tickets, for example. The sales run through the In Touch system. The accounting for these transactions is recorded in this system as well as any pertinent inventory fluctuations.

“We saw the need for this because of the way the public was paying for fees,” says Ollerton. “Parents do not bring cash or write a check as often as they used to; this system has allowed for the increased use of debit and credit cards.”

It’s another method of strengthening our internal controls by not having un-deposited cash stored in the district.

The Annual Financial Report, said Ollerton, measures a lot of things district-wide such as salaries, benefits, expenditures, etc. As part of a change in state law, this information will be broken out by school next year.

“We will be able to see how much each of the district’s six schools generate through average daily membership, for example,” explains Ollerton. “Next year these revenues and expenditures will be tracked by school.”

Roughly 1,300 of the 2,500 students in the district attend the junior high and high school which makes up almost half of the student population in the district.

The lion’s share of district expenses are in salaries and benefits which equal 69 percent of the overall budget. The next 10 percent is spent on “Other purchased services.” From there, 8 percent go toward supplies and 6 percent are slated for “Debt Service and Miscellaneous.”

Property costs make up 4 percent, followed by “Purchase Professional and Technical Services” at 2 percent. Last is “Purchase Property Services,” making up the remaining 1 percent of the overall expense budget.

The classroom is the priority when it comes to budgeting with 58% of the overall funding spent directly in the classroom.

The next largest share is 10% for maintenance throughout the district. Student support and administrative costs each receive 9%. Student supports include attendance, student discipline, a psychologist, speech therapist, vision therapist, occupational therapist, counselors and special education directors. Administration refers to the superintendent, the principals, assistant principals, school secretaries, the business office, the Information Technology director, the warehouse and the copy center.

Transportation costs make up 7% of the pie, followed by 4% for food service. The final 3% goes to education support.

“The governing board and the administration are very attuned to the needs of the district,” assures Ollerton. “They set priorities that include salaries, benefits and money going directly into the classroom. We strive to provide an excellent, meaningful education and I believe our budget tools help us accomplish that.”

In the FY19 overall $15. 7 million budget, about $13.7 was spent. The remaining funds will carry over into the FY20 budget cycle and be spent on the District’s educational priorities.

To view Snowflake Unified School District’s annual summary financial report, go to the home page www.susd5.org. Click on Departments in the blue tool bar, then select “Business Services.” On the far right, look for Financial Reports and scroll to the bottom of the list. Click on the selection under “...view the district’s AFR.”