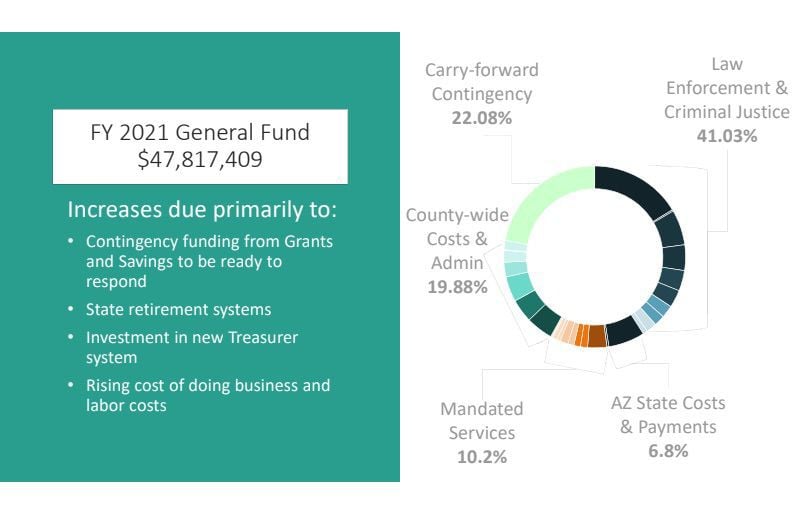 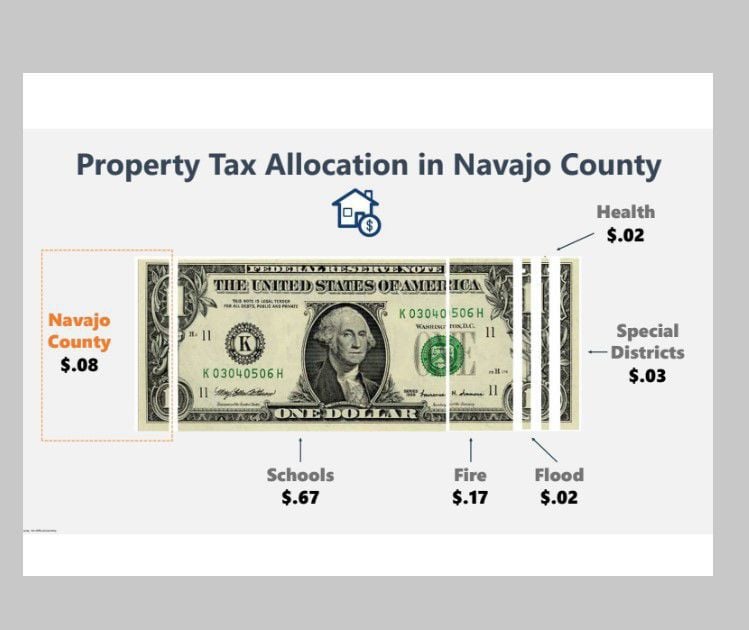 NAVAJO COUNTY — Navajo County’s bracing for hard times — but so far the pandemic has worked out pretty well when it comes to the budget.

A flood of state and federal grants to cushion the blow of the shutdowns and soaring jobless rate provoked by the pandemic will more than offset a projected decrease in sales tax, Assistant County Manager Bryan Layton told the board on Tuesday.

These new federal and state grants will allow the general fund budget to jump by 12% to $48 million. If you compare the projected budget to what the county actually spent on the general fund departments this year, the total will rise a whooping 33%.

The budget includes a $10.5-million reserve in the general fund, up from $4.2 million this year. When the last recession hit, the county didn’t have that cushion and ended up cutting services, laying off workers and freezing wages. This year the county used $4.8 million in federal CARES Act funding and $1.5 million savings from this year to bolster the reserves.

The county used another $2 million in CARES Act funding for the jail’s budget plus $1.2 million to bolster the health district’s budget.

“The county’s deliberate focus on lean government and building responsible financial reserves is key to confronting an uncertain economy,” said Board of Supervisors Chairman Jason Whiting.

Mind you, that increase in reserves and general fund spending comes despite a projected 24 percent drop in state-shared sales taxes and a projected 30% decline in the county’s sales tax, thanks to the lingering impact of COVID-19 and historic levels of unemployment. Those two sales tax categories are projected to bring in $15 million in fiscal 2020-21 compared to $20 million in the current fiscal year.

And that ain’t all.

The various county special district funds also registered sizable, overall increases — with much of the added money coming from grants. The county administers a bewilderment of programs for other layers of government, including medical care for the poor, unemploymen .

Add it all up and total county projected spending in all the funds will increase by 21 percent to $147 million. If you compare the preliminary 2021 budget to actual spending in the current fiscal year, the budget will jump 50 percent.

Moreover, the county only really has control over the $48 million general fund. The county administers another $100 million in special district funding and special revenue funds, most of it supported by grants and fees and state and federal pass-along money over which the county has little real control. Worse yet, the county has to manage most of those special funds even if the state cuts its budget and leaves the county on the financial hook.

The budget provides money for 299 workers in the general fund departments and another 332 in various special funds, although 20 positions depending on getting state health grants. That makes Navajo County one of the biggest employers in the county. The budget included money for merit pay increases in hopes of stemming the loss of workers for lack of raises over the past several years.

Employment remains essentially flat next year, despite the budget increases. The budget does include $800,000 to upgrade computer systems in the county treasurer’s office, since the county collects and distributes property taxes for a host of special districts.

The county will collect an extra $100,000 in property taxes thanks to new construction and an increase in assessed value. The tax rate will decrease slightly and should generate about $7.6 million.

Navajo County has the fourth lowest property tax rate in the state, despite its relatively low assessed value. The county could have raised the rate to collect an additional $467,000 and still remained below the state limit. That money provides another possible cushion against future revenue losses, noted Layton.

Courts and law enforcement account for the biggest share of the county budget — about 41%. That includes the sheriff, jails, probation, justice courts, superior courts, the county attorney and the public defender’s office.

The Navajo County Sheriff’s Office enjoyed one of the biggest increases for 2021. The sheriff’s general fund budget rose to $7.8 million, an 11% jump. However, much of that increase represented the shift of dispatch from the jail budget to the sheriff’s budget, after the creation of the jail district.

Most departments had only modest increases, with only a handful of departments like indigent health suffering cuts. General fund departments with sizable increases included:

Juvenile detention will rise 42% to $900,000, to begin implementing a change in how the department delivers services. The county shut its lockup for juveniles and now sends youths that present a danger to another county’s lockup. As a result, the county’s working to keep as many young people as possible in community-based programs. The budget provides for four added positions to provide those services, which would then result in a decrease in contract payments for juvenile incarceration services with another county.

couldnt be sovereign without the American taxpayer

I think they would be sovereign without Americans. Do you know that's it works? If the we weren't here then they wouldn't need us.

Now please lets keep the money in NAVAJO COUNTY and not send a dime to Sovereign Nations that are in our county. They do not pay one cent in property taxes, school tax etc. I feel the representation of the Board of Supervisors should not include any representation from any not tax paying areas. Get my drift.