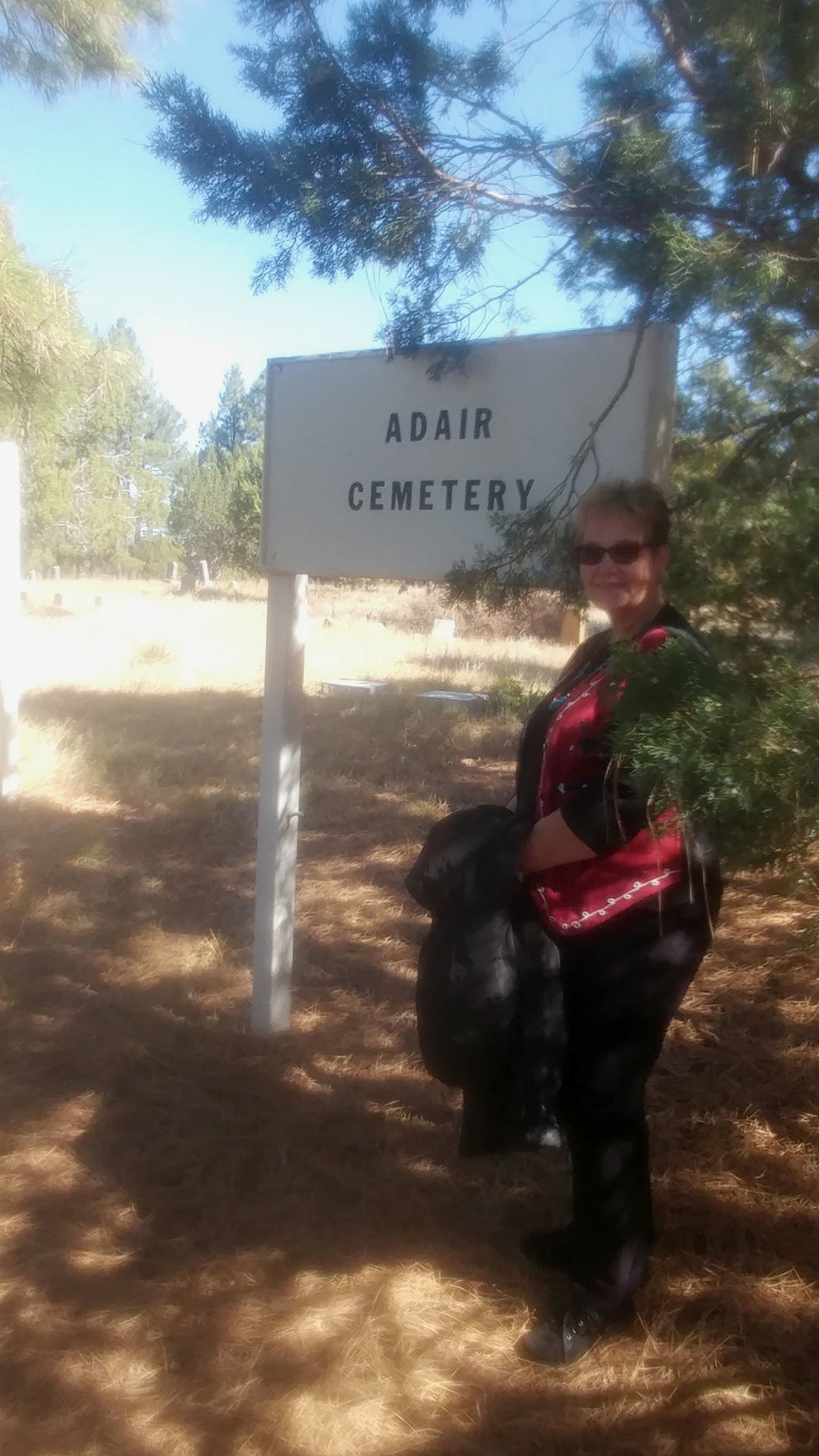 Show Low Historic Museum Director Clair Thomas, (pictured) speaking of the Adair settlement said, “There was a lot of death out there.” 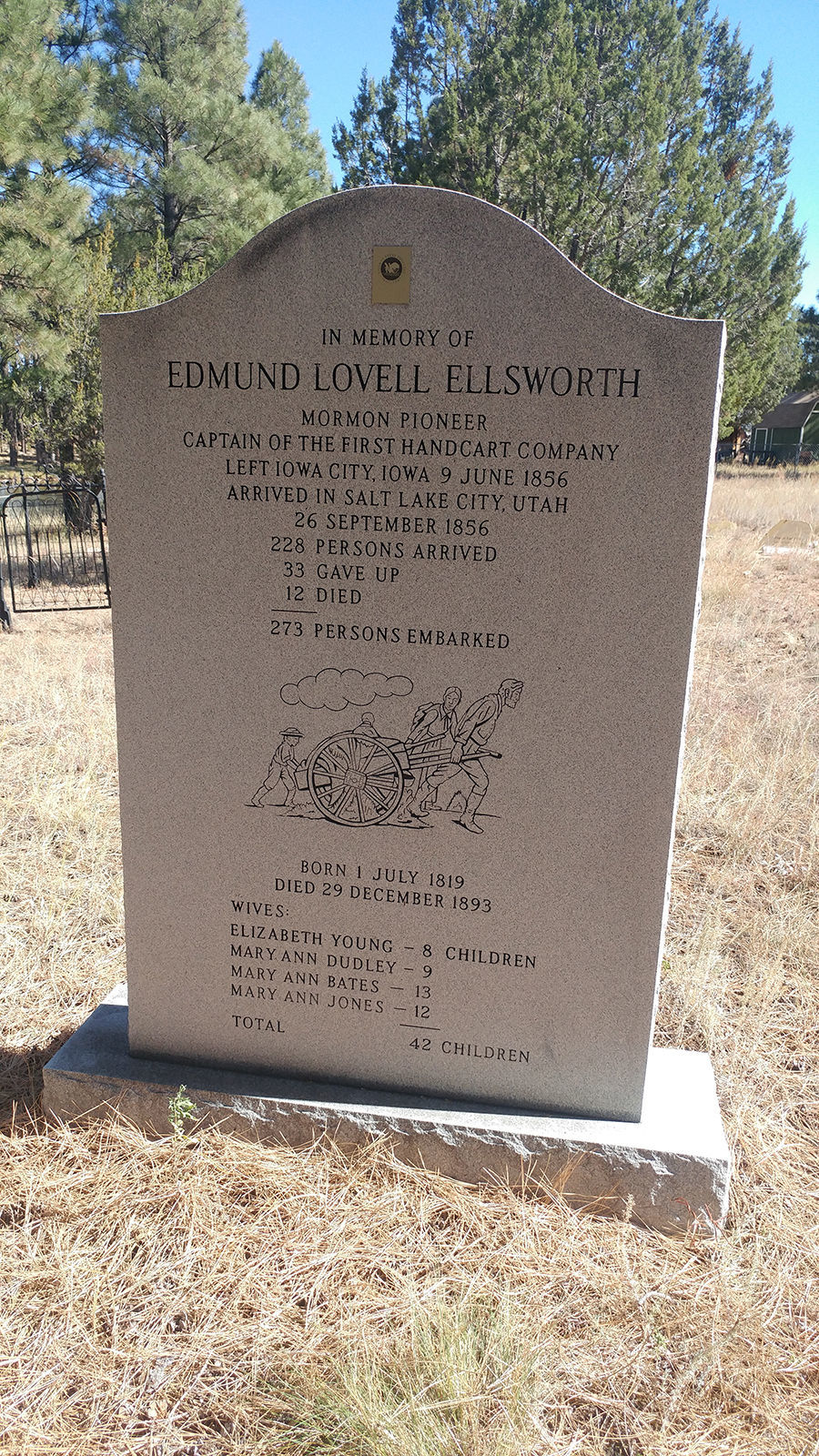 Some monuments in Adair cemetery are very specific and helpful to understanding those times. 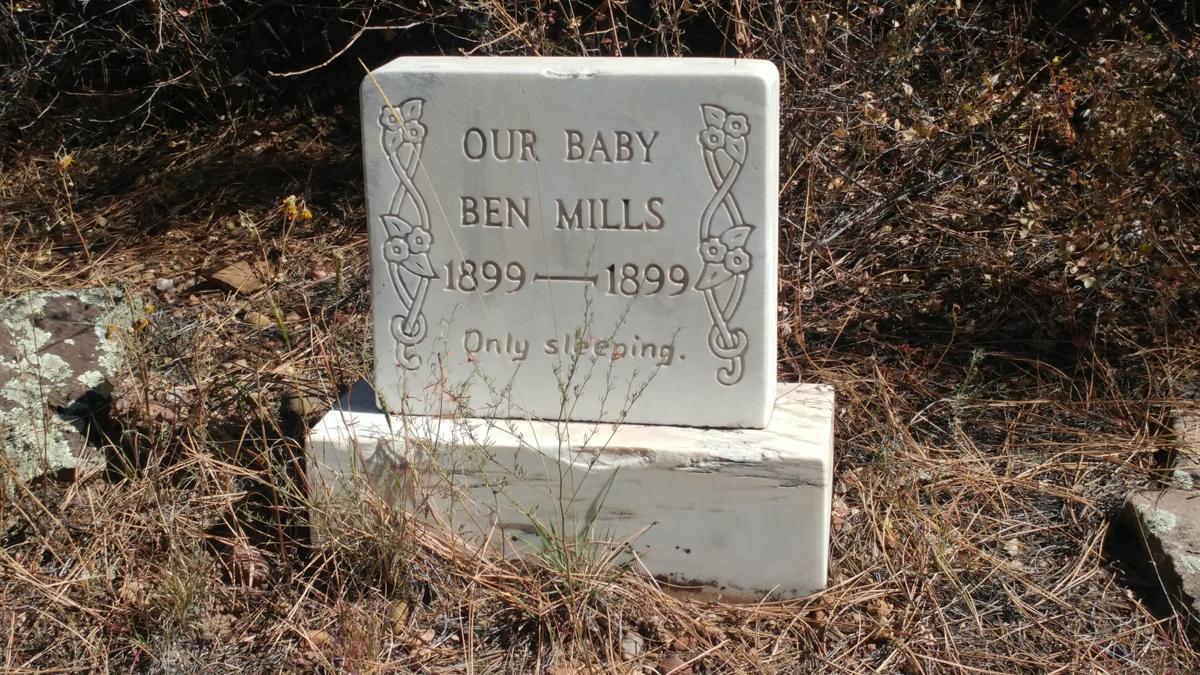 The resting place of an infant in Adair Cemetery. 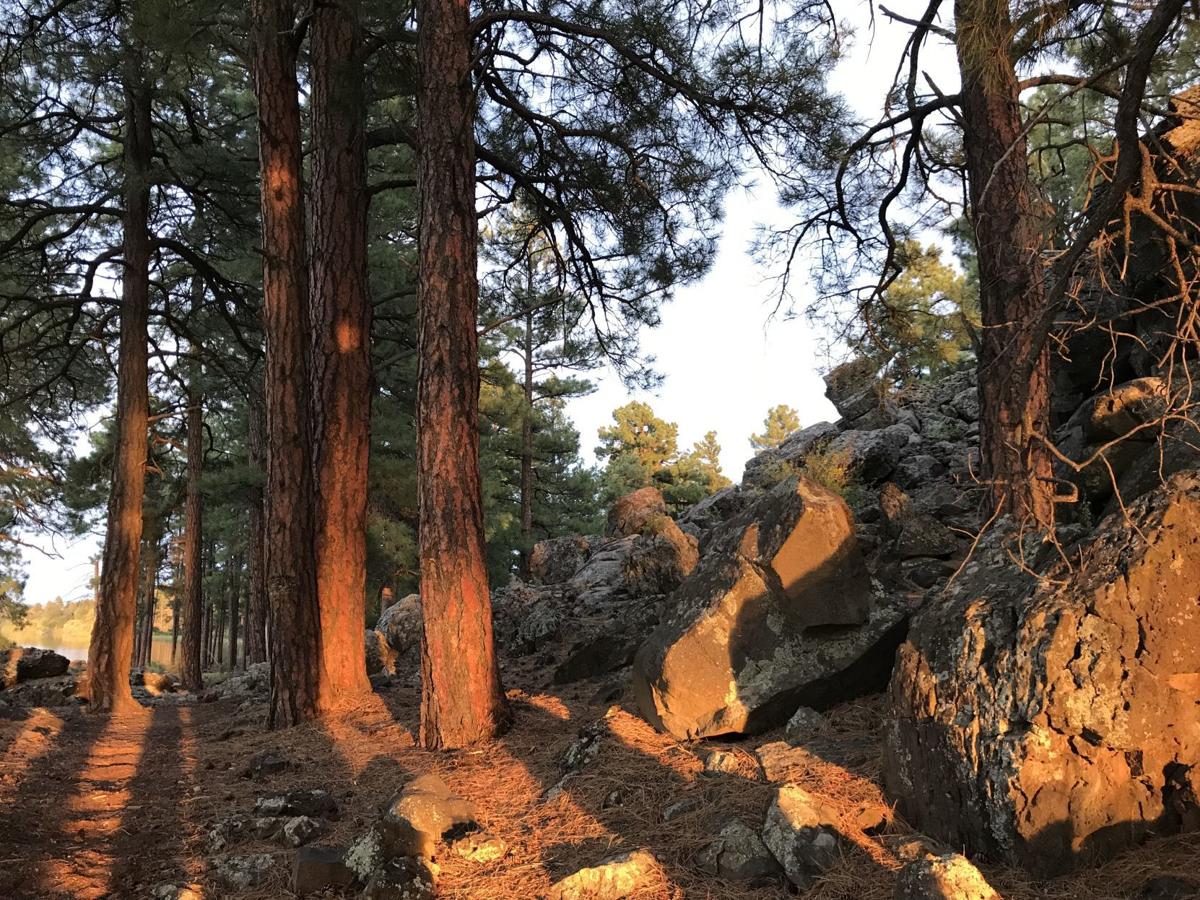 Shadows lengthen at the end of a late summer day at Fool Hollow Lake. Some say the lake is haunted by a woman, the Lady in Blue, who some say is a former resident of the community of Adair, which lies at the bottom of the lake.

SHOW LOW — “This is the place,” Brigham Young said when he and his pioneers looked out over the Great Salt Lake Valley in 1847. By contrast, in 1878 when Morman pioneer Thomas Jefferson Adair looked over a hollow now in Show Low, he should have said, “There is no way that this is the place.” But he didn’t, and thus began the ill-fated settlement of Adair.

Abandoned in 1906, Adair is now at the bottom of Fool Hollow Lake, two miles northwest of Show Low. Its empty structures fell to the inundation of the hollow in 1957 when the State of Arizona and the Army Corp of Engineers built a dam on Show Low Creek.

Life was tough and short in Adair. One of the structures claimed by the lake was called the “smallpox house,” a place to quarantine victims of smallpox, diptheria and scarlet fever — fatal diseases that had no cure and no doctors to treat them.

“There was a lot of death there,” says Clair Thomas, director of the Show Low Historical Museum.

The only remnant left of the settlement is the Adair Cemetery off Old Linden Road. The weathered grave markers honor the deceased, some of whom lived only nine years, two years, one day. The names of their descendants now adorn street signs in Show Low.

There were 12 families in total who settled in the hollow in 1879 — all Mormon pioneers tasked with settling the area. For 25 years they eked out a living tending livestock and raising corn, sugar cane, beans and other vegetables, sustained by water that the settlers had to haul from the creek. The treeless, flat bottom of the hollow looked, at first, ideal for crops, but the settlers could not have known at the time that its soil was laced with sand and salt deposits. And the bowl-shaped topography invited early frost, deadly to crops. The name “Fool Hollow” seems now appropriate, and was coined for that very reason.

Food, disease and the elements weren’t the only challenges facing the settlers. Someone named Geronimo showed up now and then on a black horse, with his hungry and untrusting people. In fact, in 1882, Adair inhabitants fled to a nearby fort for refuge against marauding bands of Apache. The fort later became the homesite of Corydon Cooley, who won a card game, and a ranch, by showing a low card. Cooley was neither Mormon nor an Adair settler, but in the spot where his home used to be now stands the downtown Show Low LDS church.

Through toil and faith, the pioneers prevailed —our thriving community attests to that. And the dead of Adair rest in peace. Except one, some say.

That would be the Blue Lady, or as some call her, the Lady of the Lake. She is said to be the ghost of a young woman, dressed in blue, illuminated with ghostly blue light, who floats a little above the surface of the lake, above the doomed settlement of Adair. Fool Hollow Lake Park Ranger Jacob Mills says that he knows campers who have been coming to the area for 50 years and talk about her. Clair Thomas reports that as a child in the 1960’s she and her young friends would go to the lake in part to catch a glimpse of the sprite. The older kids would go there to “neck,” she says.

Legend says the Blue Lady was once a resident of Adair, and like so many others, died young there. But that’s where the stories diverge, starting with the cemetery. Some say that where the cemetery is now was not its original site; that it was moved, bodies and all, before the flood. Others say only the monuments were moved, not the bodies. One version says that the monuments and bodies were moved, but that one lady of ill repute was not moved with the others and her spirit is not at rest for that reason.

Others claim that the cemetery is in its original place, on a hill, looking over a pleasant vista where Adair residents could look up and see their departed — typical of plots then and now. Moreover, the cemetery is somewhat distant from where Adair was, a distance appropriate for the remains of those who died from infectious diseases, they assert. And don’t forget the grim practice which arose among the settlers: when a child was quarantined to the smallpox house, a parent or sibling would tend to the stricken child there exposing themselves to infection. The historical record actually documents a father who did that, and died. Could a mother or sister have met the same fate?

Another record recounts a pregnant woman who, along with her family, contracted a strange head-swelling disease. Sick for four weeks, the woman and her baby died. Any one of these tragedies could explain the Lady in Blue, some argue.

Skeptics say the temperature inversion causes mists and fog to swirl over the lake and when the moonlight is just right, people imagine things. That’s the real answer here, they say. But whether the Lady in Blue exists or not, who she was and why she haunts, are questions that have lasted a long time. Longer than the doomed community of Adair. Rest in peace.

Skinwalkers and other evil creatures

WHITE MOUNTAINS — What kind of supernatural creatures do some people believe wander this region? For the Navajo, there are some that are not e…

A welcomed story of local history and color. I would appreciate more such stories.

I also enjoyed your article. I recommend taking the guided boat tour by the concessionaire at Fool Hollow Lake if you would like a close up look at the wild life and hearing about what life was like for our early settlers around what is now Fool Hollow Lake.

I, too, enjoyed this article and would appreciate seeing more like it in the paper. Although I have lived in this area for many years, I am not a native, so I don't know as many interesting facts about local history as I would like to. Thank you for a timely (Halloween is today) and fascinating story about the ghost of Adair.

Fantasic! Enjoyed hearing the history behind one of the many the stories from my childhood. Would love to know the resources used for this article so I can learn more. (Books? Personal accounts? Historical records?) Perhaps a visit to the museum will satisfy my curiosity. Great combination of folklore and history. Enjoyed very much!

My husband and I have lived on the edge of Fool Hollow lake now for 26yrs. We walk back there, fish, swim, boat ect. We have never seen a Blue Lady although we know the the legend of her. We also knew about the graves under the lake. I have always wondered if that is still true. I couldn't see how it could be with that not being sanitary or healthy for people. That doesnt mean they moved all the head stones though. I have swam across this lake once and I have to tell you half way across not only was I tired but creeped out like something or someone was going to grab my feet at any moment. The feeling was enough to hurriedly move me to get to the other side and back onto land. Now it definitely could just be my active imagination but it was very strong And I'll never forget that feeling. Fool Hollow is a beautiful special peaceful lake. It definitely has it's own personality though.

Wonderful story and beautifully written! Thanks for sharing some of our local history.