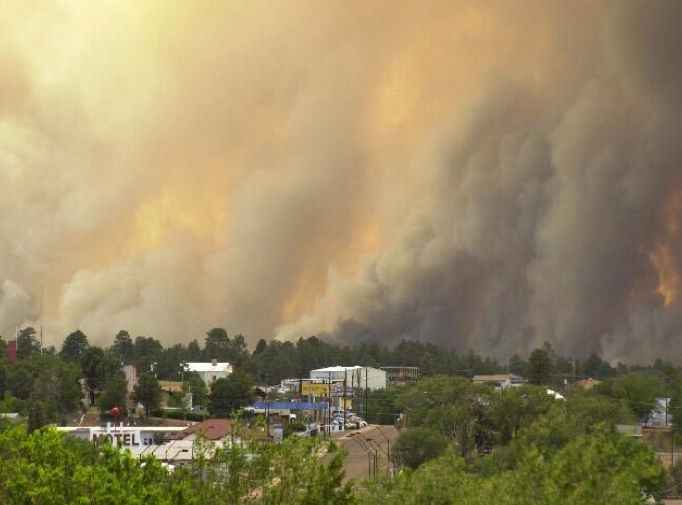 As the fire crossed the "trigger point," the bottom of Hop Canyon, the towns of Show Low, Lakeside, Pinetop, Hon-Dah and McNary were evacuated during the 2002 Rodeo-Chediski Fire. The Incident Management Team felt that if the fire moved into Show Low, the intensity of the fire coupled with the topography would make stopping the fire almost impossible. 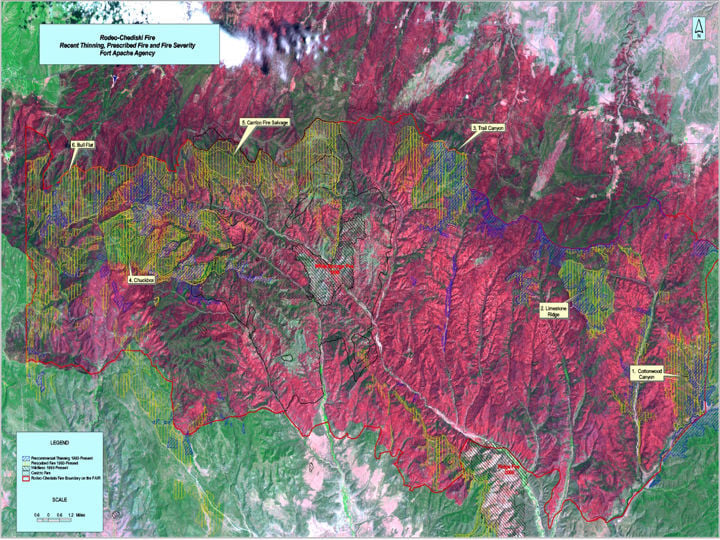 Satellite imagery shows the burn severity of the fires. But more importantly, this map shows green areas where there was little to no burn severity. It shows the green areas where the Fort Apache Agency had performed either: (a) its fuels treatment projects via thinning and/or prescribed burning; (b) mistletoe eradication;(c) timber sales, etc. The red areas show most severe impacts in the woodland types, and low land chaparral areas. 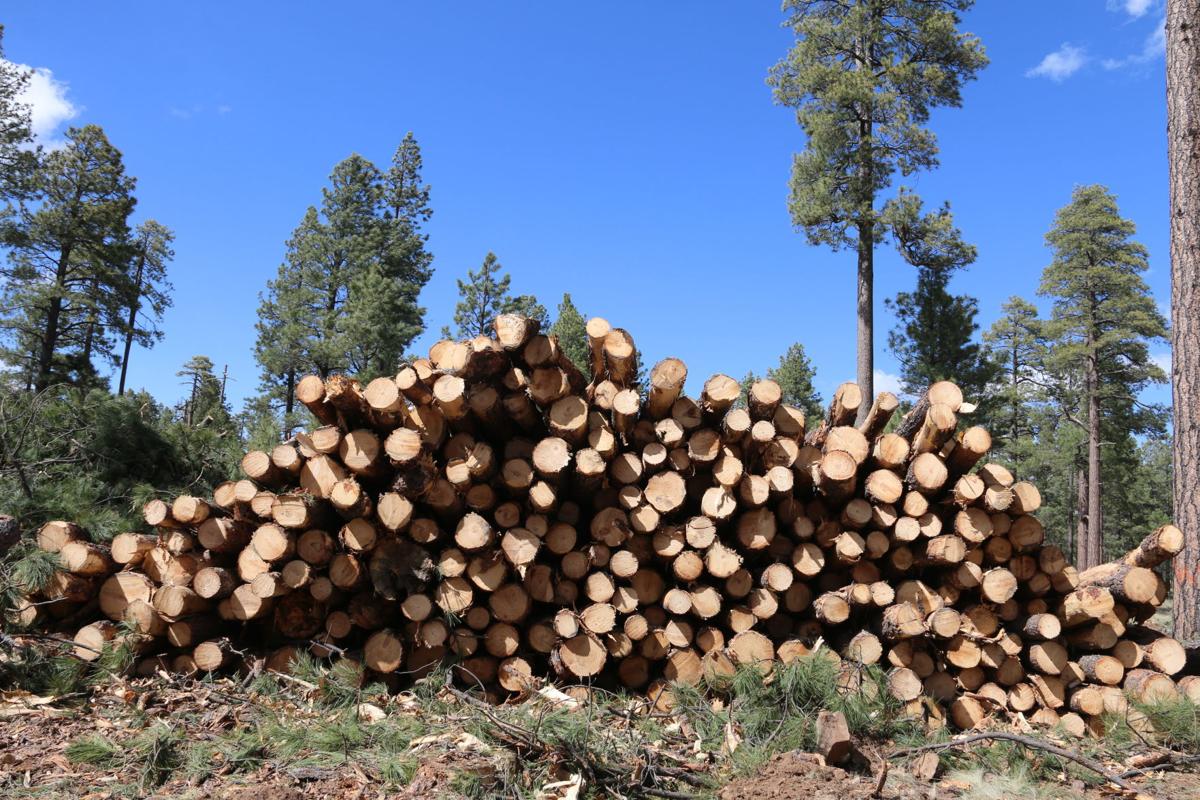 ARIZONA — Call it the tale of two cities – or regions, if you want to get technical.

Both Flagstaff and a cluster of White Mountains communities have tried different approaches to saving their communities from the next megafire.

In Apache and Navajo counties, the White Mountains Stewardship Project sought to thin the forest to reduce the threat of wildfire with the help of local industry and federal subsidies.

Now Flagstaff has launched the Flagstaff Watershed Project, with money from a voter-approved, $10 million bond issue as well as a close partnership with the Forest Service.

A recent forest health and thinning conference in Payson shed light on the two most successful forest restoration and wildfire mitigation projects in Arizona to date. The summary offered muted hope in confronting an existential threat – the kind of wildfire that devastated Paradise, California, destroying 12,000 homes and killing 88 people.

Most of the communities in the White Mountains face a far greater threat than Paradise did before it burned to the ground last year.

University of Arizona economist Anne Mottek offered an overview of the strengths and weaknesses of the two approaches. Mottek worked as a consultant to both projects, giving her a unique perspective.

“Complacency permeated the Forest Service in 2002 – but the Rodeo-Chediski Fire was like nothing we had ever seen. Not only was it such a large fire, but it was a very intense fire. It pretty much fried the landscape, fried the soil – it was a very, very disruptive fire. Public opinion began to change from ‘logging is evil’ to ‘logging is good.’ Wildfire finally became a front-burner issue.”

The two locally supported projects demonstrate the possibilities — and the lethal frustrations — of reversing a century of forest mismanagement. Both projects were galvanized by lethal wildfires.

The 560,000-acre Rodeo Chediski Fire inspired the White Mountains Stewardship project in 2002 by forcing the evacuation of 30,000 residents, consuming 500 structures and costing the federal government $308 million in initial fire-fighting costs – and millions more in damage to the watershed.

The 15,000-acre Schultz Fire inspired the Flagstaff Watershed Project after charring thousands of acres and killing a girl in a post-fire flood. It cost $10 million to fight and the subsequent flooding did $140 million in damage. The town undertook studies after the fire that revealed Flagstaff had narrowly avoided a catastrophic series of floods that could have done a billion dollars worth of flood damage to downtown Flagstaff – even if the town avoided burning down.

Overall, the White Mountain Stewardship Project had the biggest impact, before it expired from its reliance on a fitful per-acre government subsidy to help deal with disposal of the nearly worthless brush and slash. The project putted along at a rate of about 5,000 acres annually, limited largely by how much money the Forest Service could dig up each year to provide a roughly $500 per-acre subsidy.

However, the more recent Flagstaff Watershed Project has already cleared thousands of acres on the edge of Flagstaff and does not rely on the fitful support of the Forest Service, which is dealing with budget cutbacks while the cost of fighting fires consumes an ever-larger share of its budget.

The White Mountain Stewardship project not only saved the tattered remnants of a timber industry in the region, it pioneered the whole idea of large-scale timber projects focused on forest restoration. The project and its spinoffs have spurred the thinning of some 150,000 acres in the past 15 years – dwarfing any other restoration project in the country. The project itself lasted 10 years before the Forest Service pulled the plug hoping the 4-Forests Restoration Initiative (4FRI) would do the same job on millions of acres with no taxpayer subsidy. The 4FRI inititiave has not been nearly as successful.

“They were the pioneers. That was beginning of seeing the industry as a true partner. It brought together environmental groups, industry, scientists, community members and the Forest Service,” said Mottek.

The project proved loggers could make money processing trees just 12 inches in diameter, compared to the early mills geared for old growth trees 25 to 36 inches in diameter. The project got a huge boost when NovoPower opened, proving a place to sell much of the biomass.

The people willing to invest in new mills faced daunting challenges. They often struggled to line up financing, since banks remained leery of any mill dependent on a steady, long-term supply of wood from public lands, given the gridlock and delays that had plagued timber contracts in the past, said Mottek.

Moreover, the onset of the recession four years into the project nearly polished off the mills and wood-processing operations. The housing industry collapsed, which killed the markets for many of the products the mills were by then producing.

Somehow, the risk-takers who gambled on the contracts and built mills that could handle the small stuff stayed in business – buffeted by the recession, the federal requirement to essentially pay union-scale wages and the year-to-year swings in how much the Forest Service let them thin, said Mottek.

“They developed a cluster model – which was really important,” she explained.

Different businesses opened close by one another, to make use of all the wood and biomass produced by the thinning projects. In the old days, the giant trees produced so much revenue producers would just discard the waste and the smaller materials — often just leaving it in piles in the forest to burn.

The infrastructure investment ultimately totaled some $130 million from private industry and some $50 million in federal funding.

“Without the stewardship contract as the foundation and without the grant money as the seed, I don’t think the White Mountain situation would have been nearly as robust,” said Mottek. “You have to give a lot of credit to the Center for Biological Diversity and the contractor and Forest Service personnel, who really changed that combative climate to cooperation … The forest products industry was actually re-established in the White Mountains. Businesses could grow and take risks and invest in infrastructure.”

The model proved itself by the acres thinned, some 70,000. By contrast, after seven years of trying to make 4FRI work without a subsidy or market for the biomass – the contractors have thinned just 13,000 acres.

4FRI was supposed to thin 50,000 acres annually at no cost to taxpayers, but so far the main impact has been to nearly kill off the fledging, reinvented wood products industry in the White Mountains. Only strenuous efforts by a coalition of local officials and industry has kept the industry alive through the leadership of the Eastern Arizona Counties Association. The small-scale forest products industry spawned by the Stewardship Project had picked up 4FRI contracts the main contractor could’t handle and kept themselves alive.

Meanwhile, the blunted hopes for 4FRI that led directly to Flagstaff’s desperate effort to take its future into it’s own hands, by raising money to spur thinning projects from local taxpayers.

The Payson Forest Health conference took place as Flagstaff’s nightmare threatened to become reality, with the Museum Fire burning on the very watershed consultants warned could generate a billion-dollar flood if heavy monsoon rain hit the slopes after a high-intensity fire.

In a bitter irony, the fire was sustained in part by piles of logging slash left behind by the town-financed thinning projects. In some cases, crews piled up trees using a helicopter because the slopes were so steep. Fortunately, the region got just enough early monsoon to tame the fire, but none of the heavy downpours that could have spelled disaster.

In November 2012, Flagstaff residents upheld the first voter-supported, forest restoration bond issue in the nation, cementing the town’s status as the leader in responding to the wildfire threat. The measure received a stunning 74 percent of the vote. The $10 million in local funding attracted another $7 million in grant funding, enough to make a difference.

Flagstaff had already adopted a Wildlands Urban Interface (WUI) building code, designed to prevent embers from a nearby wildfire from setting many buildings on fire at the same time and to limit the spread of a fire from house to house. Flagstaff also has a strong Firewise brush clearing code and has deployed its own fire department’s brush thinning crews to clear overgrown lands within the town boundaries.

None of the counties or towns in the White Mountains have comprehensive WUI or Firewise codes, much less money to thin critically overgrown areas on the outskirts of town.

Mottek called the nine-month campaign to pass the bond issue an “incredible journey,” which brought together Flagstaff and Coconino County officials, environmental groups, the fire department and a wide cross-section of the public. The support turned on voter’s realization that wildfires not only threatened their homes, but the watersheds on which the whole community’s future depends, she said.

However, even the fully engaged voters of Flagstaff and town officials willing to embrace codes requiring WUI building standards and Firewise thinning can only throw up a desperate, last line of defense in the event another Rodeo-Chediski, Schultz or Paradise fire.

In the end, if the Forest Service can’t make 4FRI work and restore millions of acres of forest to health, the wildfire will inevitably extract its terrible toll, agreed the experts gathered at the conference.

In the meantime, the Forest Service continues to spend about $3 billion each year fighting wildfires. Using a White Mountains Stewardship model, that money would thin 3.7 million acres annually, while providing tens of thousands of jobs in hard-pressed rural communities.

“We can pay now or we can pay later,” said Arizona State Forester David Tenney, former Navajo County supervisor. “It costs 10 times as much per acre to put out a fire as it does to treat it ahead of time. So why in the world would we say it’s better to do it later?”