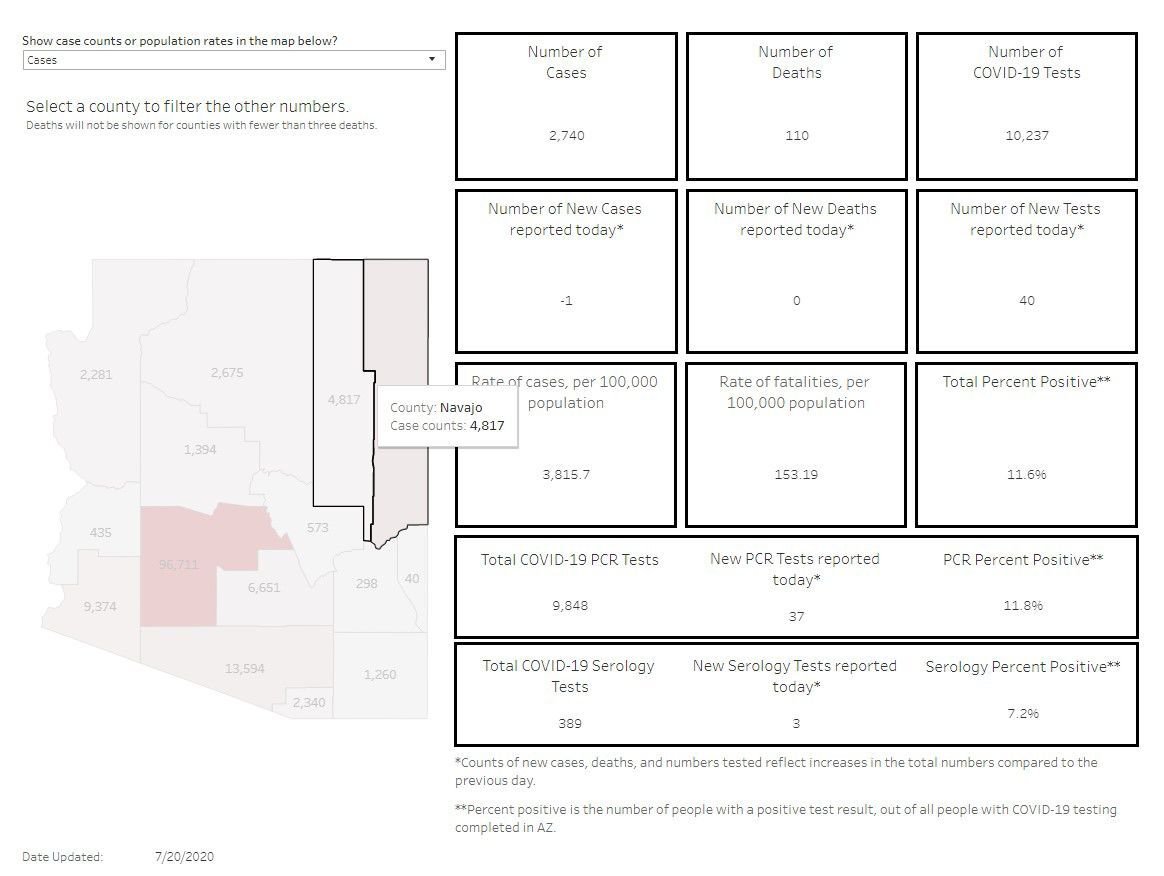 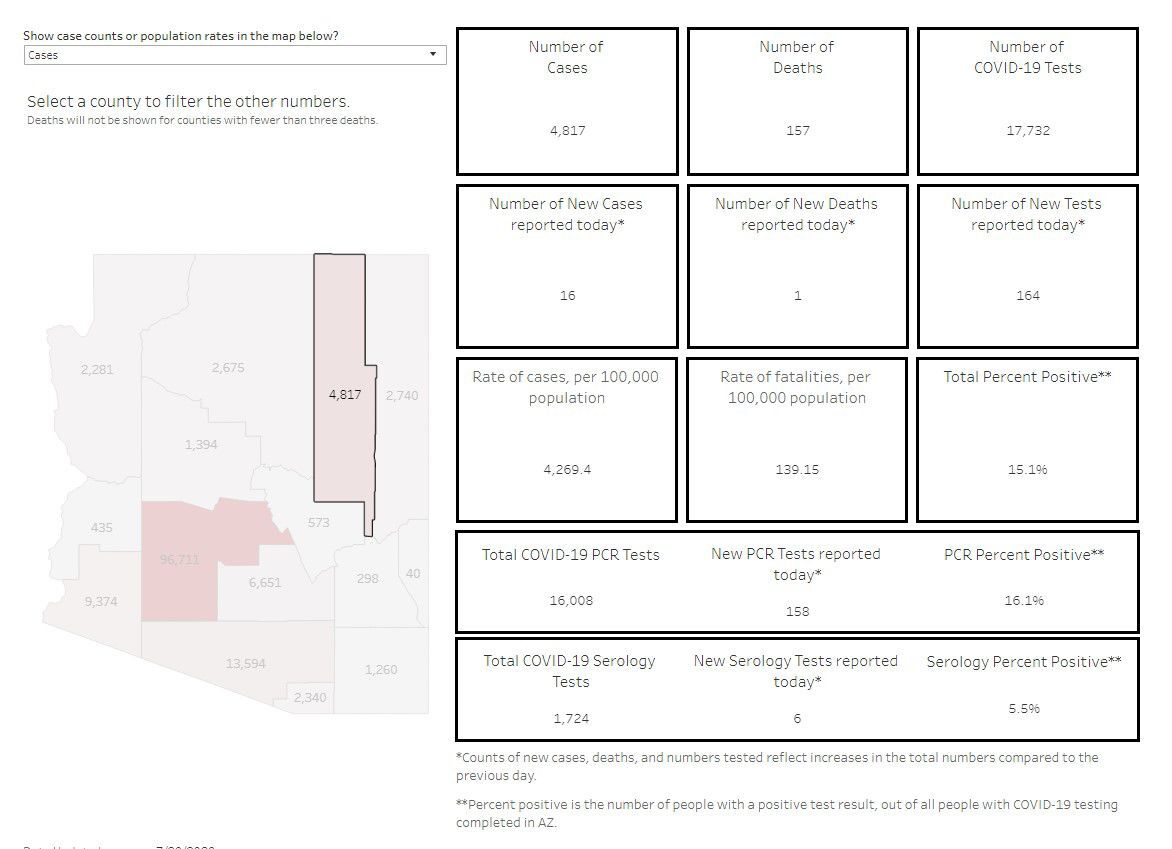 The state got more bad news last week with the discovery that a faster-spreading strain of the virus that causes COVID-19 now dominates the cases in Arizona.

Scientists don’t know if the new strain causes more serious symptoms, only that it can latch onto and enter cells faster – so it becomes the dominant strain wherever it takes hold.

The discovery could help account for the explosion of new infections since the state lifted its stay-at-home order on May 15.

New cases have risen from about 500 per day to a peak of about 5,000 per day, although the running, seven-day average of new cases may have finally started to level off statewide.

Unfortunately, the death toll has now taken off – after lagging behind the pace of new cases. Doctors hoped the lag in the increase in deaths meant that the larger percentage of younger people getting infected weren’t getting as sick. Moreover, they hoped improvements in treatment were reducing the death toll. Those two things might sill be a factor, but it looks more like the lag reflected how long it takes for the most seriously ill patients to go from the initial infection to death.

The discovery that Arizona’s now contending with a faster-spreading strain has complicated efforts to predict what the virus will do next.

A mutation in the SARS-CoV-2 genome has made it more infectious – at least in laboratory cell cultures, according to a study by researchers from the Los Alamos National Laboratory and elsewhere published in the journal Cell. The mutation makes a small change in the virus’s ‘spike’ protein, which it uses to cut its way into the cells it infects.

But the increasing dominance of the new strain all over the world suggests the mutation helps the virus spread faster in real life, not just the laboratory. The increased infection rate underscores the importance of wearing a mask in public, say doctors.

Overall, SARS-CoV-2 doesn’t mutate as fast as the flu or even the AIDS virus. That’s good news for scientists trying to develop a vaccine. For instance, the flu virus evolves so quickly that scientists have to modify the vaccine every year so a new shot at the beginning of each flu season confers about 60 or 90 percent immunity for that year. However, this set of four linked mutations in SARS-CoV-2 appears to have arisen once and spread around the globe.

So far, it doesn’t appear that the mutation makes the virus more likely to cause serious symptoms – just more likely to spread, said the researchers. Mounting evidence suggests perhaps half of the people infected never develop symptoms, but can still pass the virus along simply by breathing out microscopic viral particles. This has confounded many of the early computer models and has allowed the virus to spread widely in a community before doctors even realize they have a problem.

Researchers in Arizona did a genetic analysis of 1,400 viral samples and found the new strain accounted for 90 percent of the infections, according to David Engelthaler, co-director of the Translational Genomics Research Institutes Pathogen and Microbiome Division. The D614G mutation apparently originated in Europe and has now spread widely.

Health experts poring over the daily data say in the past week they’ve seen the first, hopeful signs that the rise in cases may be slowing, after increasing roughly tenfold since the stay-at-home order expired on May 15. The number of new cases reported daily on the state’s website increased from about 500 per day on May 15 to about 5,000 per day last week at the peak. The numbers of new cases have dropped to about 3,500 per day, but remain far higher than during the stay-at-home period. Hospitalizations have also declined slightly, remaining at just under 90 percent of capacity.

However, the daily death toll has increased, after lagging behind the rate of increase in infections for the past month. The big lag could reflect the higher percentage of young people getting infected as they go out more and in larger groups, since younger people are much less likely to die. It might also reflect improved treatments. But it probably also reflects the month or so it takes to progress from the initial infection to death for the most seriously ill.

The percentage of positive tests has also declined slightly. Arizona still has the highest percentage nationally – which peaked at 27% positive in the past week or two. This means one in four swab tests for an active infection comes back positive – an indication of widespread presence of the virus in the community and not enough testing. That percentage remains above about 17% in recent days, but at least it has stopped rising. The federal Centers for Disease Control says the percentage of positive tests should be below 5 percent before resuming normal activities, although even then the experts advise people to wear masks and practice social distancing.

Health experts say the spreading use of face masks in public may have slowed the runaway spread of the virus.

A national database maintained online by the New York Times now lists Arizona as a state where new cases are staying “about the same,” but also the state with the fastest rising number of deaths.

The picture looks somewhat different on a county-by-county basis.

Gila County has surged after months of having a much lower infection rate and death rate than the rest of the state and country.

Early this week, the Arizona Department of Health Services reported that Gila County had a total of 16 deaths, many of them in a single area nursing home. The county had an infection rate of 30 per 100,000 population and a death rate of seven per 100,000. The county reported four deaths in the past week – as of early this week.

The Gila County Health Department reported lower totals, including just 386 confirmed cases and 15 deaths. Of the confirmed cases, 211 were in Payson, nine in Pine, seven in Star Valley and four in Tonto Basin.

The Gila County death and infection rates are now very close to the statewide rates of 38 infections and seven deaths per 100,000 population.

Payson now represents the epicenter of the pandemic in Gila County, which has shifted north from Globe and Miami. Payson had 19 new confirmed cases in the past few days with the largest cluster of deaths as well.

So far, Gila County has 573 confirmed cases. The state department of health services reports only 6 percent of the tests in the county have come back positive since the start of the pandemic. The most recent numbers show that of the 77 tests reported, only three came back positive – a rate of 4 percent.

Navajo and Apache counties still have infection rates far above the state average, but the rate of increase has slowed in the past two weeks.

The hotspots in the state in the past week have been in Yuma, Santa Cruz, Navajo and Apache counties – all areas with large minority populations, whether Hispanic or Native American. Studies show the death rate among blacks, Hispanics and Native Americans have been two or three times the death rates for whites. Scientists aren’t sure how to account for the difference. It might reflect genetic factors and pre-existing conditions like diabetes. It likely also reflects both access to healthcare and holding jobs that make it harder to stay home or work at home.

Great example of distorting the facts. How is the death rate rising when https://azdhs.gov/ shows it declining? How is there an explosion of new cases when the same web site shows a steady decline for a month?Yes new cases rose from around 500 in mid-May to a peak of over 5000 on June 29, but they have since declined to near zero. Why only tell half of the story? Are you trying to inform your readers or frighten them? For what purpose?

Where do you get your facts? The DHS dashboard shows over 3700 new cases today (7-25) and over 140 reported deaths. 3700 new cases is declining to near zero according to you? Yes the State is showing moderation and hopefully a continued decline in new cases but near Zero? Let's all be reasonable and get all of our facts straight.