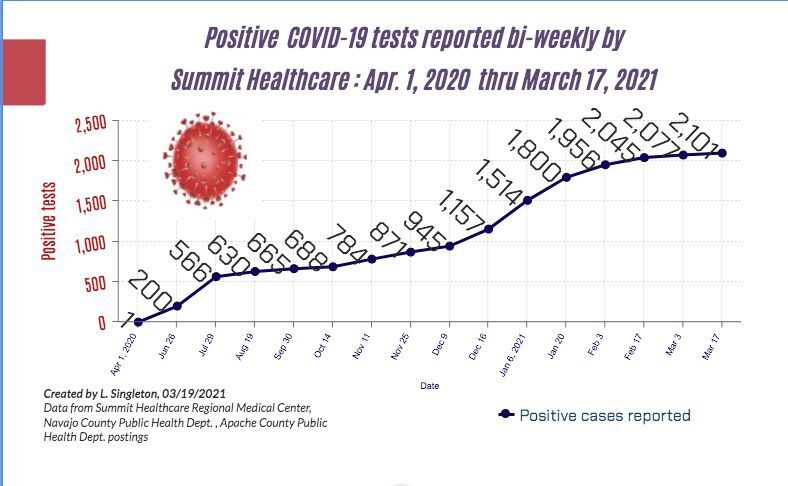 This chart reflects positive COVID-19 tests reported through the Summit Healthcare Regional Medical Center system from April 1, 2020 thru March 17, 2021. (This is not the number of cases that have been or are currently being treated in the hospital.) See Page 4 for the Summit Healthcare information. 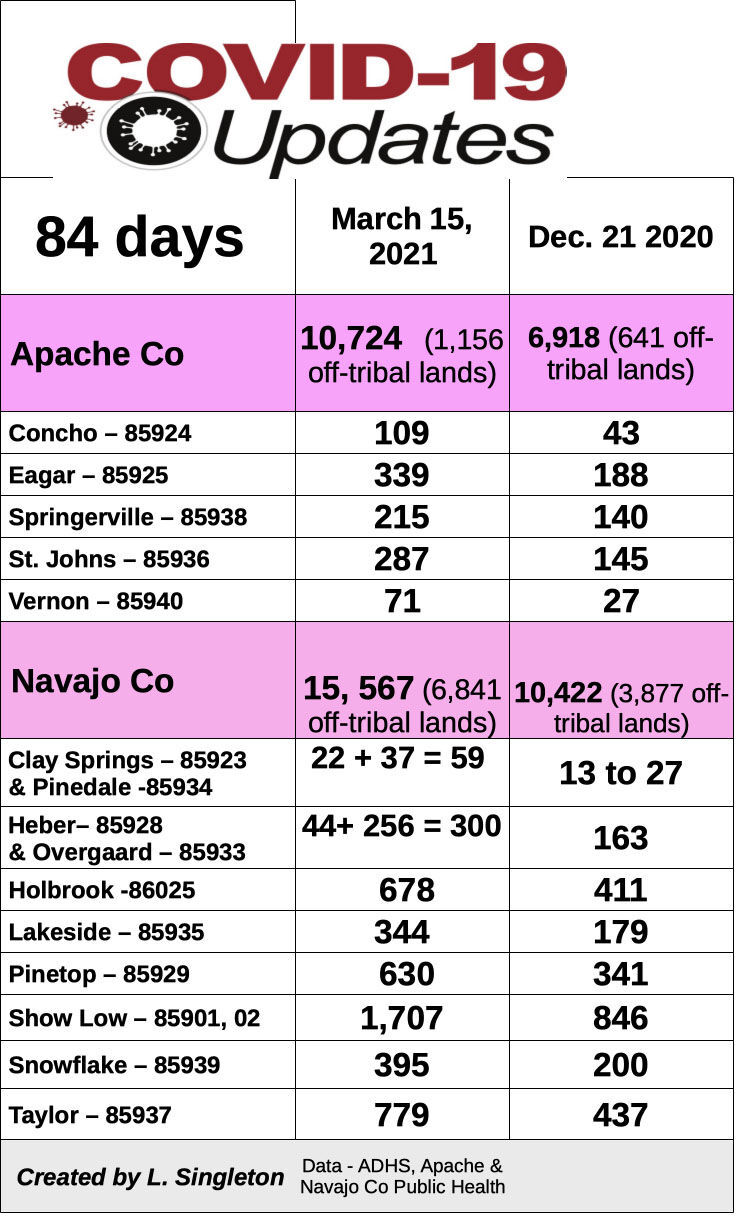 This is a case comparison by zip code which compares the number of cases in some cities and towns in Apache and Navajo counties.

This chart reflects positive COVID-19 tests reported through the Summit Healthcare Regional Medical Center system from April 1, 2020 thru March 17, 2021. (This is not the number of cases that have been or are currently being treated in the hospital.) See Page 4 for the Summit Healthcare information.

This is a case comparison by zip code which compares the number of cases in some cities and towns in Apache and Navajo counties.

SHOW LOW — COVID-19 case numbers in Arizona continue to slide down. That goes for numbers of new cases in Apache and Navajo counties and positive cases tracked in the Summit Healthcare Regional Medical Center system.

That’s a far cry from last July and the first week of January 2020 when Arizona had the highest infection rate in the world and the U.S., according to John Hopkins University and the federal Centers for Disease Control metrics.

You might say, “We’ve come a long way baby,” since then.

When compared to the end of January, there are significantly fewer new cases per day in March on a statewide level. This also applies to Apache and Navajo counties. In some instances, the number of new cases per day drops by 50 percent every two weeks.

On Tuesday, March 15, there were only 648 new cases reported in Arizona which is reminiscent of the lower case numbers in September and October 2020.

Previously a “hot spot” in the state and the nation, Navajo County continues to demonstrate a strong decline in new cases per day.

On Jan. 1, Navajo County Public Health Department reported 41 new cases in off-tribal lands which includes non-reservation towns and cities such as Snowflake/Taylor, Show Low, Pinetop-Lakeside, Heber-Overgaard, Holbrook and Winslow. On January 5, new cases rose to 87 per day, then to 112 on January 17.

For the month of March, there have been 15 or fewer new cases per day. On March 9, the Arizona Department of Health Services (AZDHS) reported zero new cases in both Apache and Navajo counties.

Apache County Public Health reported a decrease in new cases similar to that of Navajo County.

On Jan. 12, new cases in off-tribal lands were only 14. They rose slightly in mid January but dropped back to roughly 16 new cases per day at the end of January.

In February, Apache County averaged 20 cases or fewer per day with several days reporting less than 5 new cases per day.

Moving into March, the new cases per day remained at fewer than 10 cases on average.

Summit Healthcare issued its newest bi-weekly update last Wednesday, Mar. 17 reporting a total of 2,101 positive cases of COVID-19 throughout it s system. This number is a 24-case increase since their last bi-weekly update on March 3.

The number of positive tests for a two-week period is based on tests results coming through all of Summit Healthcare’s facilities. This means all Summit walk-in clinics, provider offices, outpatient surgery and the hospital. The total number of cases is a running total from April 2020 to March 17, 2021.

While the number of positive tests reported by Summit bi-weekly has increased, the number is not increasing at the same rate it was last summer and this January.

Then, on February 3, the positive cases rose to 1,956 which is an increase of only 156 demonstrating a clear downward trend in positive COVID tests.

Another leap downward was made evident in the Feb. 17 positive tests of 2045. The new cases only rose by 89. March 3 showed the continuation of the trend with only 2,077 positive tests — an increase of only 32 cases.

From March 3 to March 17, only 24 positive tests were reported.

On average, the number of positive tests in the Summit system are steadily decreasing by more than 50 percent every two weeks.

Arizona was in the number one slot for the highest average daily number of cases per capita on Jan. 6 at 118.3, according to the federal Center’s for Disease Control COVID Data Tracker.

As of March 16, North Dakota had the highest number of cases per 100,000 population. Neighboring South Dakota is in second place, followed by Rhode Island, Utah and then Tennessee. Arizona has dropped to sixth place.

Globally, the U.S. still leads as the country with the total number of cases at over 29.7 million as of March 19. This is according to John Hopkins University and Medicine Coronavirus Resource Center.

Brazil and India are next in line for total number of cases with 11.7 and 11.5 million cases, also as of March 19.

Note, this is the same data reflected in the line graph.

Don't get complacent, we are NOT out of this yet! Per the NY Times Covid Tracking:

The Navajo County is at a HIGH risk level. Cases have decreased over the past two weeks but are still high. The number of hospitalized Covid patients has also fallen in the Navajo County area. Deaths have remained at about the same level. The test positivity rate in Navajo County is high, suggesting that cases may be undercounted.

Apache County is at a VERY HIGH risk level. Cases have decreased over the past two weeks but are still very high. The number of hospitalized Covid patients has also fallen in the Apache County area. Deaths have remained at about the same level. The test positivity rate in Apache County is relatively low, suggesting that testing capacity is meeting current demand.