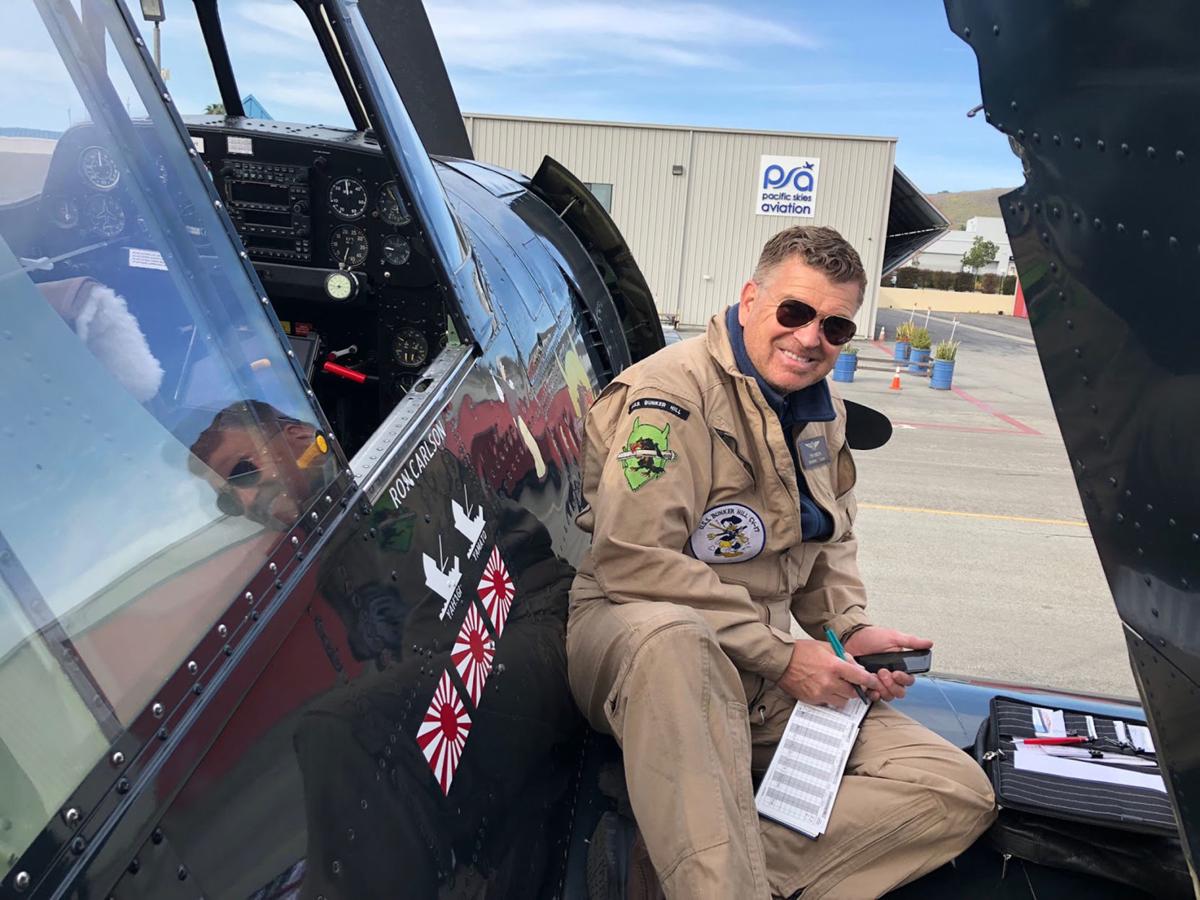 Ron Carlson sits on the wing of his World War II-era Grumman TBM Avenger, a Navy warplane that was used in the Pacific theater. The photo was taken in California before Carlson began the flight that ended with the plane’s disappearance. He had the aircraft completely refurbished before it crashed somewhere east of Whiteriver in May 2018. 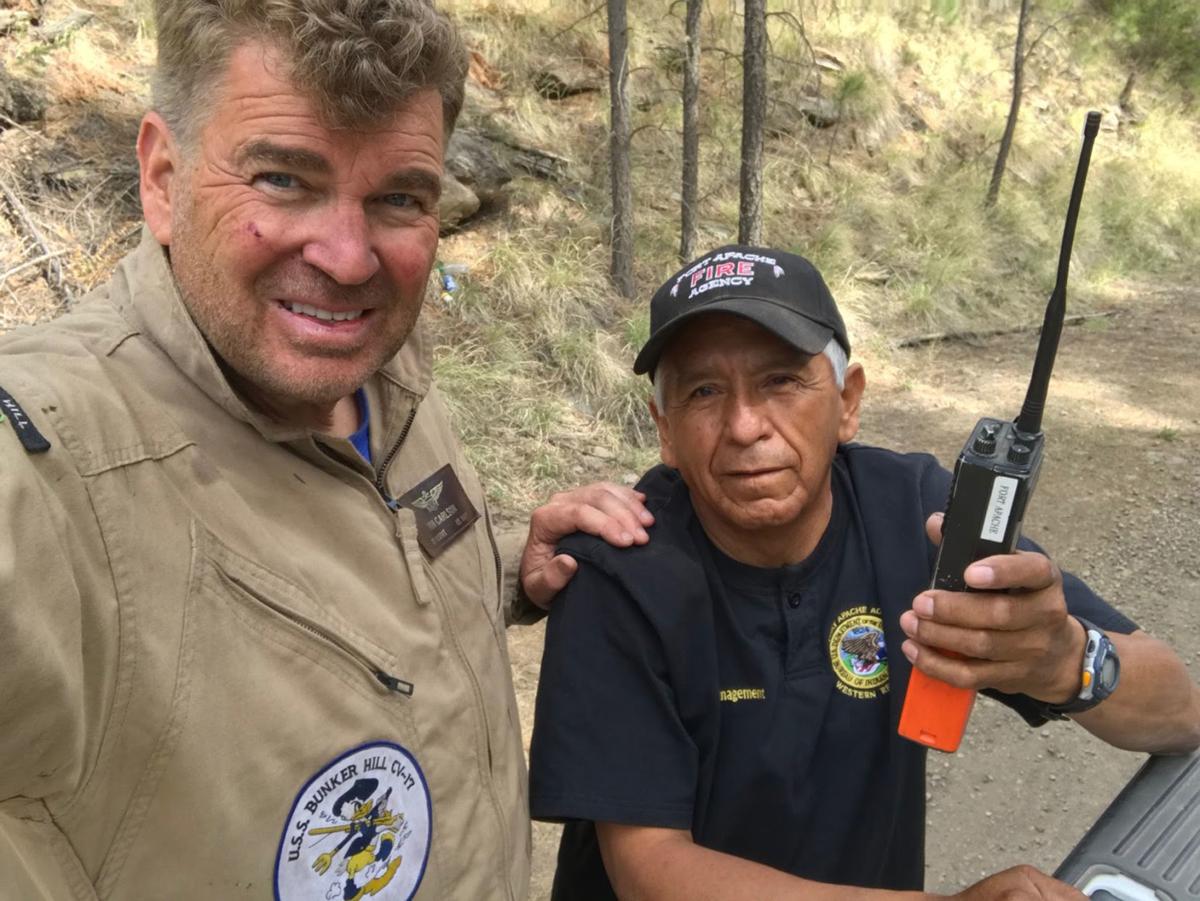 Carlson poses with one of his rescuers from a BIA Forestry crew. The crew radioed for an ambulance to help the survivors. Carlson sustaned injuries to both ankles and one knee as a result of parachuting from the plane into a remote area on the reservation. 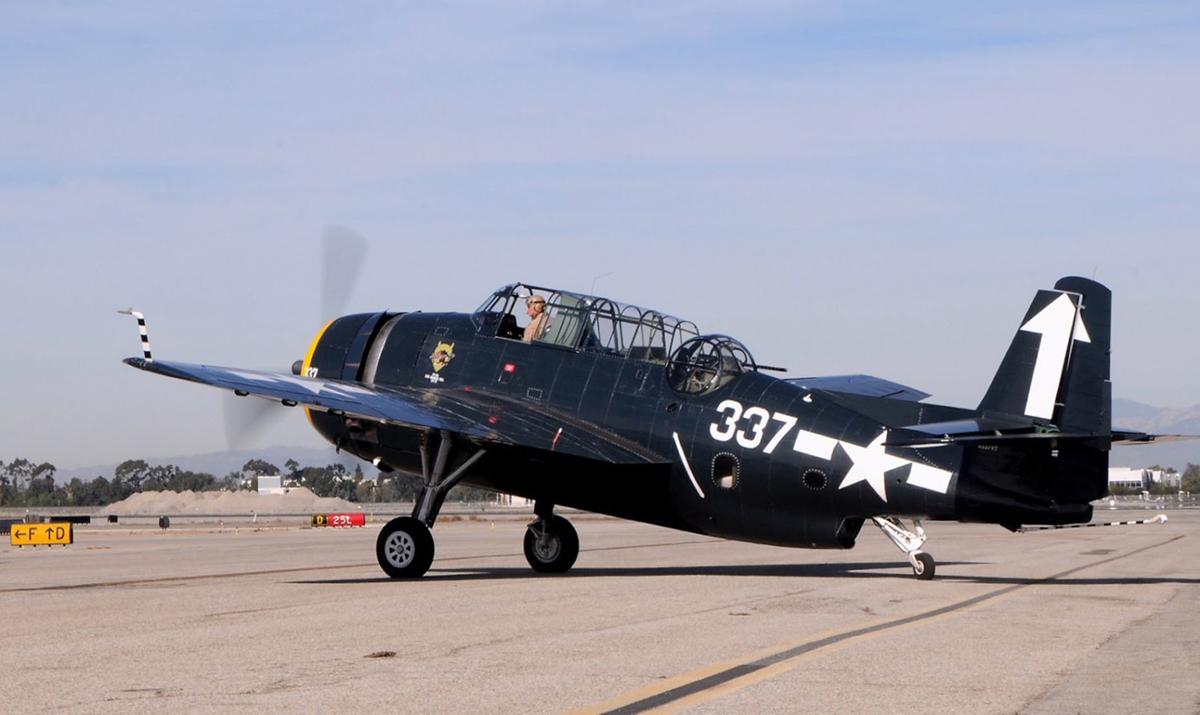 Ron Carlson’s World War II Grumman TBM Avenger, a Navy warplane that was used extensively in the Pacific theater of World War II sits on the runway in California, before its final flight.

WHITERIVER — A man who parachuted out of an historic World War II-era aircraft over the Fort Apache Indian Reservation a little over a year ago has reached an accord with the White Mountain Apache Tribe that will allow a professional search team to look for the plane that is still missing.

Ron Carlson and Ken Franzese were flying a fully-restored Grumman TBM Avenger Navy warplane from California to Chicago when the plane’s engine apparently caught fire east of Whiteriver on May 5, 2018. The two were forced to jump from the plane at about 1,000 feet above the treeline and parachute to safety. Each was injured as a result of the fall, and had to hike some distance before they were discovered by White Mountain Apache Tribe Game & Fish employees and taken to the hospital at Whiteriver for treatment.

The plane apparently crashed in a remote location, and has not been found.

In a joint press release issued Wednesday afternoon, Ron Carlson, the head of a Chicago architectural firm and owner and pilot of the Avenger warplane and Tribal Chairwoman Gwendena Lee-Gatewood stated that the “White Mountain Apache Tribe and Mr. Carlson are now discussing the best approach to comprehensively search for the missing aircraft on the Tribe’s lands.”

The reconciliation between Carlson and the tribe came after a highly critical press release was issued by the tribe last weekend that accused Carlson of making “irresponsible media announcements inducing the public to violate federal and tribal laws to retrieve his airplane.”

Tension appeared to grow between the two parties ever since Carlson published a full-page ad in the White Mountain Independent last December promising a $20,000 reward for any person who could find the plane and give him the GPS coordinates for its location.

Carlson speculated that the plane had possibly gone down on reservation lands, and offered a potential general location for a crash site to would-be searchers.

The ad sparked an angry response from the Tribe, who stated that “Anyone attempting to recover the plane by entering that restricted area of the reservation will be treated as a trespasser and be subject to resulting fines and property seizure,” following Carlson’s announcement of the reward. Additionally, the tribe feared they would end up rescuing people who might become lost or injured searching for the plane, especially in winter.

The Tribe stated that it has encountered numerous trespassers searching for the plane over the past year.

Carlson said he reached out to the Tribe before the ad was published, but received no response.

After a year had passed without finding the plane, Carlson said that in mid-September he posted a YouTube video that was critical of the Tribe, which prompted the press release issued by the Tribe on Oct. 11.

The negative exchanges ended this week when one of the Tribe’s attorneys, Robert Brauchli, at the direction of the Tribe, contacted Carlson to see if an agreement could be reached.

In a telephone interview with the Independent on Wednesday, Carlson said he was encouraged by his conversations with Brauchli.

“I kind of took a risk and opened up … he had a direct line to Gwendena and brought us together, that this was all a big misunderstanding,” Carlson said.

As a result of the conversation, Carlson took down the YouTube video the Tribe objected to and also has rescinded the reward — if the plane is found on reservation lands. In return, the Tribe has offered assistance to Carlson for a formal search for the missing aircraft on the reservation.

"I look forward to the positive relationship in working in a dual effort to recover a part of history, and keeping mindful of the tribes lands etc., and protection of its resources," said Chairwoman Gwendena Lee-Gatewood in an email to the Independent.

Carlson said the reward will still be paid to a successful searcher if the plane is found outside of the reservation.

The press release states that the professional search will start with an aerial search “followed by an agreed upon ground search by tribal rangers and guides.”

Carlson said he didn’t know exactly when the search would start, but that it could begin within days, and that he is anxious to get going because of impending winter snows. He plans to hire his own expert searchers to participate in the process.

Carlson said that the biggest misconception surrounding the search centers on his motivation to find the plane. He said there are no drugs or diamonds onboard. To him, the value lies is recovering an historic aircraft of which only 15 or 20 are left in the world, and solving the mystery of why it crashed after it had just been completely refurbished.

“It’s part of our history, part of our legacy, it needs to be in a museum,” he said. He has been consumed by the loss of the plane and the fact that it is still missing, he explained.

“It happened on my watch that this beautiful airplane that is part of our legacy (was lost). I feel responsible,” he said.

Why can't they start with an arieal survey of the areas first before going in on foot? When the aircraft crashed it damaged the environment [trees & bushes, ect..] so why not start looking for that first, the damage path is larger than the aircraft & easier to find