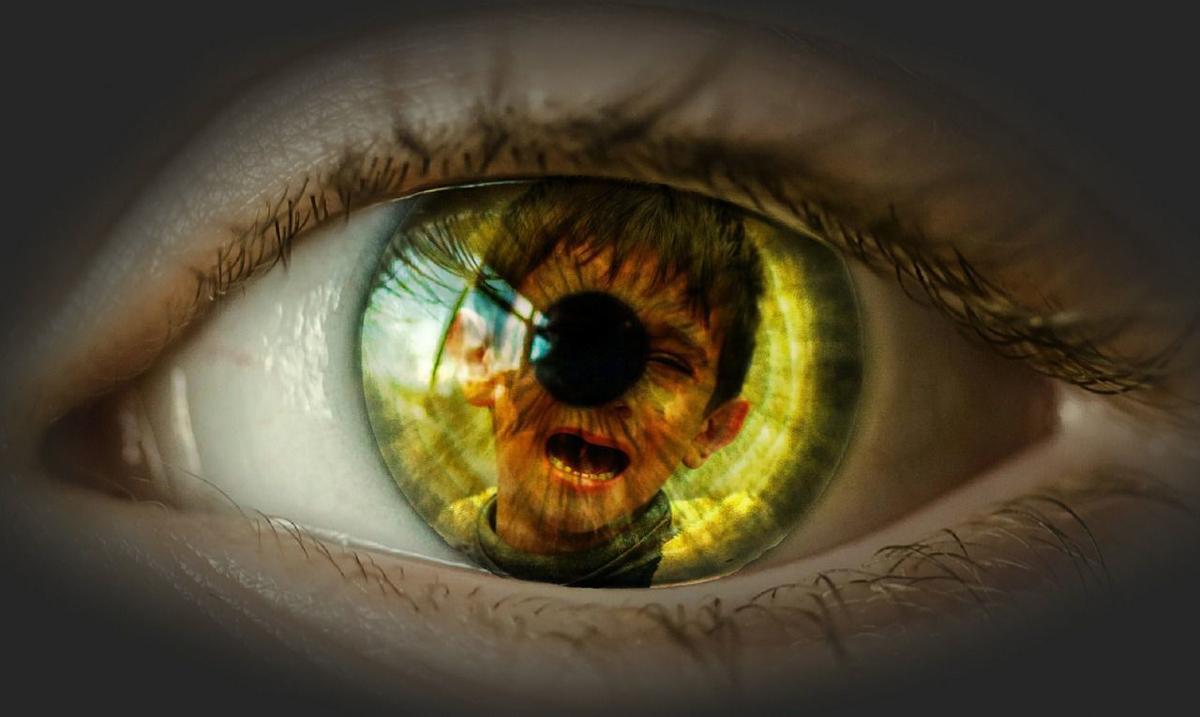 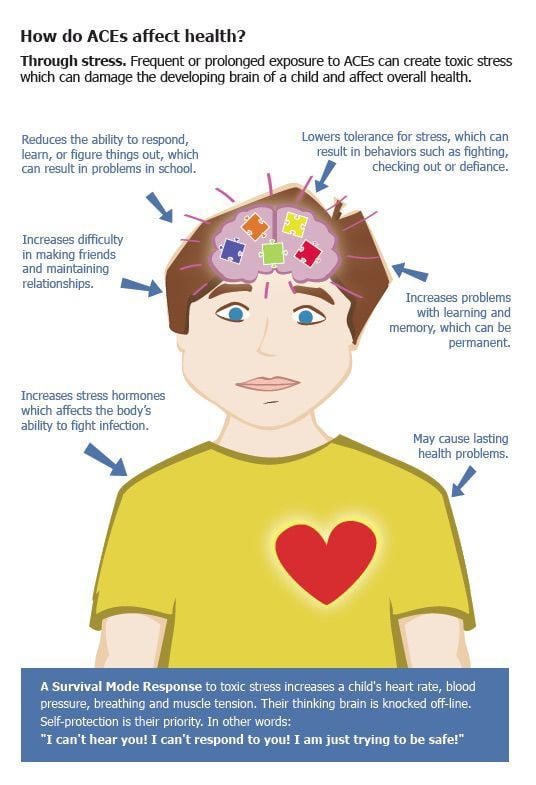 This image is part of a handout provided during the May 20 Community Conversation. It demonstrates how serious childhood traumas or adverse childhood experiences (ACEs) can produce stress that can harm a child’s developing brain. See www.menominee-nsn.gov/CommunityPages/FosteringFutures for additional information. 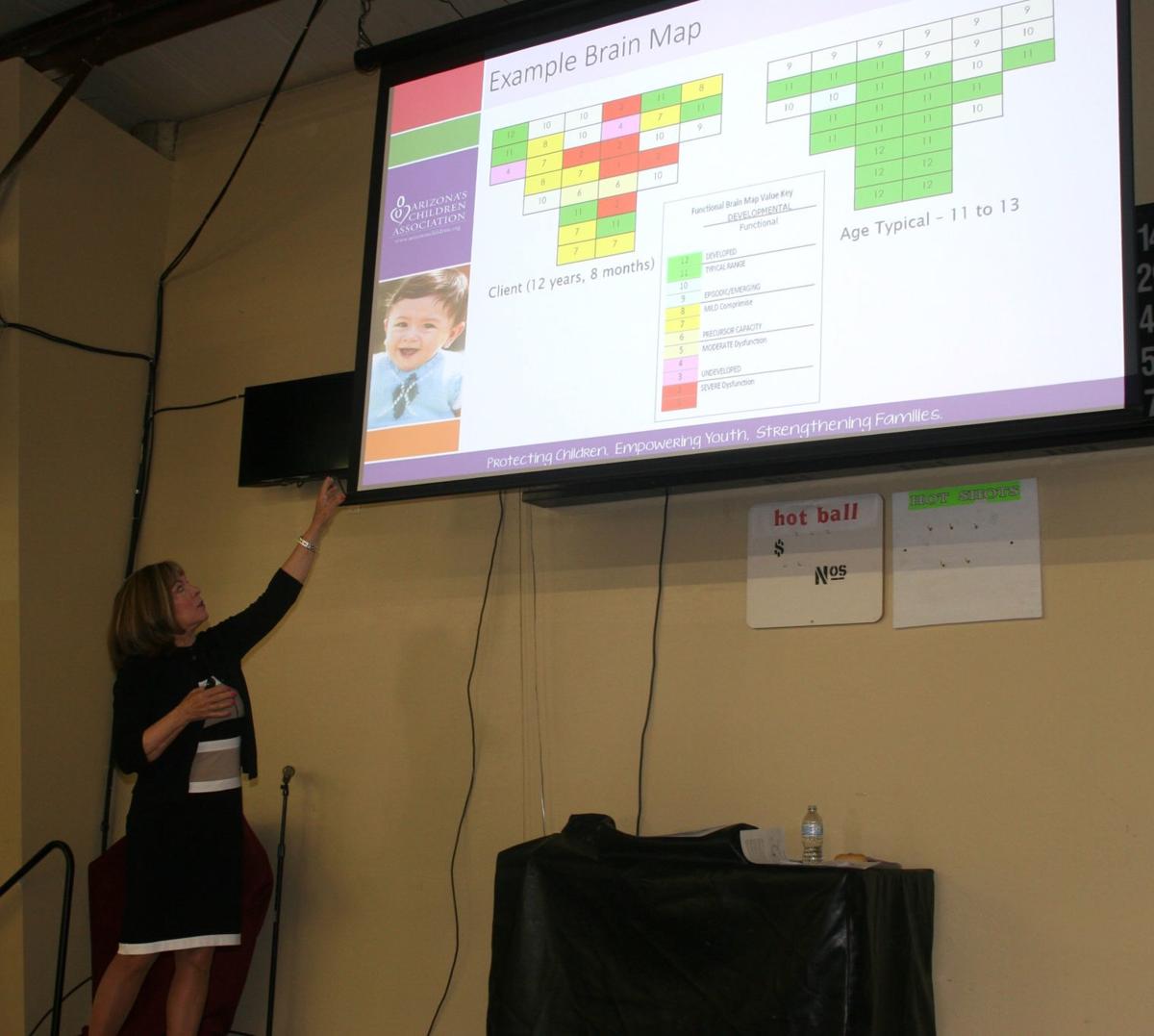 Dr. Jill Stamm, Ph.D., associate clinical professor at Arizona State University in Psychology in Education demonstrates how a child’s brain can be “mapped.” The mapping process helps illustrate the impacts of early childhood trauma. This model is being used throughout Arizona to help children who exhibit unhealthy or difficult behaviors. 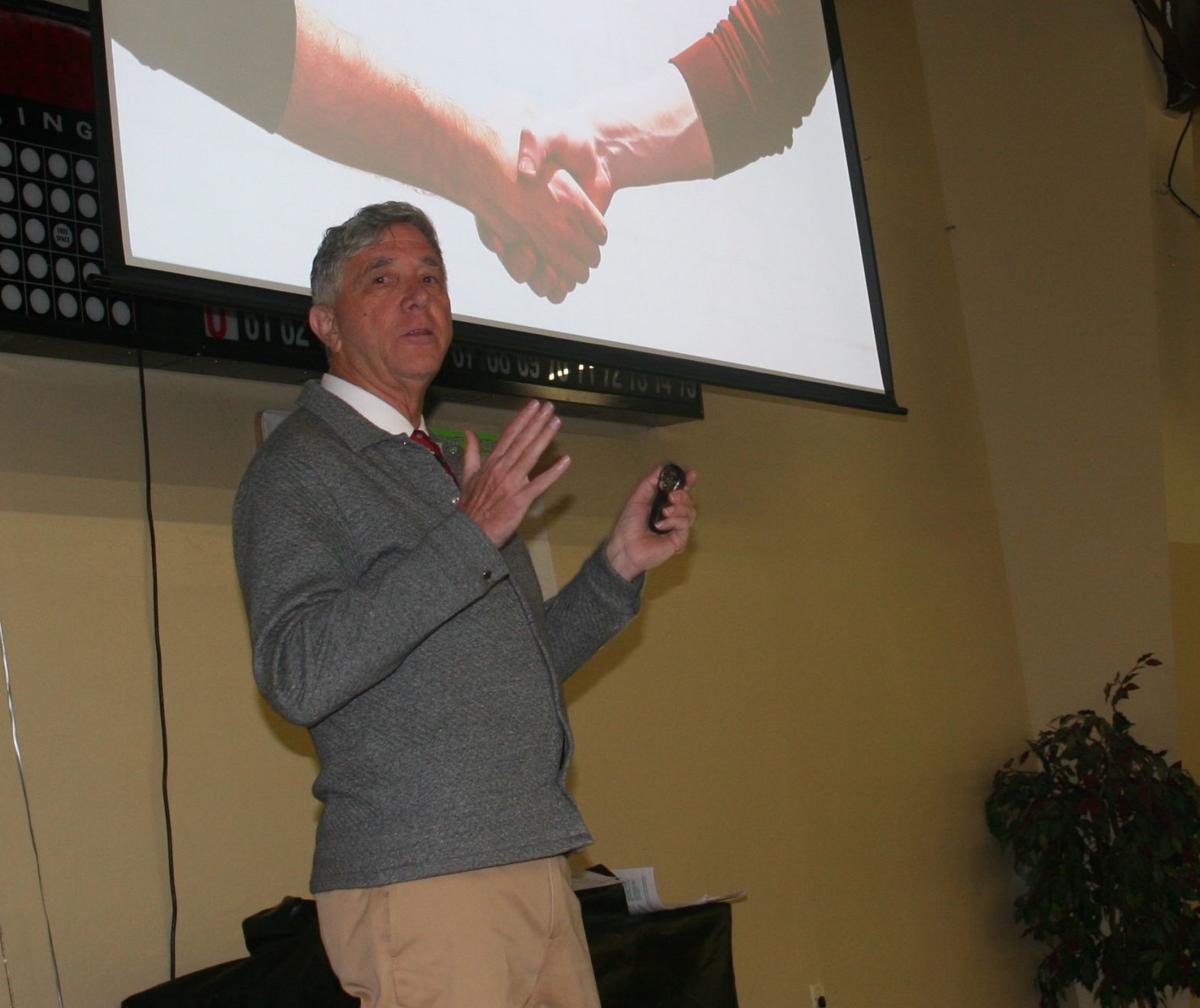 This image is part of a handout provided during the May 20 Community Conversation. It demonstrates how serious childhood traumas or adverse childhood experiences (ACEs) can produce stress that can harm a child’s developing brain. See www.menominee-nsn.gov/CommunityPages/FosteringFutures for additional information.

Dr. Jill Stamm, Ph.D., associate clinical professor at Arizona State University in Psychology in Education demonstrates how a child’s brain can be “mapped.” The mapping process helps illustrate the impacts of early childhood trauma. This model is being used throughout Arizona to help children who exhibit unhealthy or difficult behaviors.

SNOWFLAKE – Navajo County residents, including children, face a number of serious problems that affect the county’s health and well-being. The problems facing children in particular were the focus of a community forum held May 20 in Snowflake, and attended by 135 community leaders.

The problems were identified in the Navajo County Public Health District published the results of their 2018 Community Health Assessment (CHA) which described the physical and social conditions that affect the health of Navajo County. The assessment compiled the 2017 survey results of over 108,000 residents.

The survey and other epidemiological data revealed problems with poverty, mental and emotional health, substance abuse, chronic diseases and community resources. An action plan, Community Health Improvement Plan (CHIP), has been formulated to address these problems.

The first priority is to reduce the 29 percent poverty rate in Navajo County which is nearly double the national rate, according to the assessment.

“Poverty and poor health are linked,” says the Community Health Improvement Plan (CHIP). There are 30,548 people living in poverty in Navajo County.

Poverty is one example of an adverse childhood experience that can have devastating effects on individuals that tend to be reflected in the future health and prosperity of a community.

The “community conversation” held at the May 20 forum focused on identifying how and when children in Navajo County could be at risk for trauma and adverse childhood experiences also referred to as “ACEs.”

“We hope to change the culture in Navajo County when it comes to supporting families,” explains Navajo County Public Health District Community Outreach Specialist Allison Hephner. “We have invited leaders and change agents because this is about being proactive and we need their voice.”

Hephner was one of several event organizers who invited two professionals to speak at the forum about how “the epidemic of childhood trauma impacts every family and every agency.”

“This is not a training; it’s a conversation,” adds Hephner. “We are working to answer the question of how certain adverse life experiences during childhood can translate into major destructive patterns carried out into adulthood.”

Emotional, physical and sexual abuse, neglect, household substance abuse, family mental illness, divorce and/or homeless are examples of ACEs or experiences “that result in toxic stress that can harm a child’s brain” and “can result in long-term health problems,” according to Nadine Burke Harris, founder and CEO of the Center for Youth Wellness.

Attendees were provided a copy of an ACEs questionnaire consisting of ten “yes” or “no” questions that is used to evaluate an individual’s childhood trauma.

“Did a parent or other adult in the household often or very often push, grab or slap, or throw something at you? Or ever hit your so hard that you had marks or were injured?” is the first question in the ACEs survey.

“Did you often or very often feel that you didn’t have enough to eat, had to wear dirty clothes, or had no one to protect you? Or your parents were too drunk or high to take care of you or take you to the doctor if you needed to go?” is the fifth question in the ACEs survey.

The other eight questions incorporate the subjects such as emotional abuse, divorce, incarceration and/or mental illness in the family home. The 10-question survey has been administered for 20 years, providing significant data.

According to the 20-year research behind ACEs, the more “yes” answers that one has when taking the ACEs survey translates into a higher likelihood longterm health problems.

ACEs “have been found to have devastating effects on the future health and prosperity of children,” according to the Kaiser Permanente study that is said to have first brought the problem of ACEs to light.

“Trauma due to ACEs can diminish a person’s capacity to learn, form healthy relationships or succeed with family, work and community life,” according to ResilienceLeaders.org and professionals that administer the survey.

The ACEs survey was discussed by presenters in the forum as an important data-driven tool that can also be used to help demonstrate the importance of preventing childhood trauma.

The hope is that the “community conversation” held on May 20 will be a catalyst for community leaders, government representatives, healthcare providers, decision-makers and stakeholders to “work in alignment with existing efforts to create a seamless system of care, safety and education,” according to the agenda for the event. “Our goal is to ensure that 100 percent of our residents have access to 10 vital services.”

The vital services in preventing ACEs and in strengthening the health of a community are broken into two groups of five. The first five are listed as “survival services” that include behavioral healthcare, medical/dental care, housing, food and transport. The remaining five are listed as “services for thriving” and include parent supports, early childhood learning programs, family-centered schools, youth mentors and job training and placement.

Efforts to ensure the community has these services tie together with the Community Health Assessment (CHA) that was published in December 2018 by the Navajo County Public Health District.

The CHA has been a primary source of information and research for communities within Navajo County, according to Public Health and Emergency Management Director Jeff Lee. “The assessment identifies poverty, mental/emotional health, substance abuse, chronic diseases and community resources as the top priorities in the Community Health Improvement Plan (CHIP),” explained Lee in a recent interview with the Independent.

A formal improvement plan has been developed to focus on priority action items identified in the assessment. Many of the community-wide goals to improve the health of the Navajo County residents align with information presented in the ACEs forum.

The end goal is a safe childhood, successful students, productive employees, resilient families and healthy communities. “We have to utilize the information and data specific to our community and find the method that works for us,” summarized presenter Dr. Jill Stamm during the forum.

For more information about the data and materials presented during the May 20 “Community Conversation,” email Allison Hephner at Allison.Hephner@NavajoCountyAz.org. Also visit www.rleaders.org/ and www.AnnaAgeEight.org.

You can also download the ACEs survey at https://www.ncjfcj.org/sites/default/files/Finding%20Your%20ACE%20Score.pdf

“Trauma due to adverse childhood experiences (ACEs) can diminish a person’s capacity to learn, form health relationships or succeed with family, work and community life."

NAVAJO COUNTY — Finding specific information about the key health issues in Navajo County is easier, faster and more accessible than ever befo…

for 20 years the only option is to run from Navajo County and find a place that actually cares about domestic violence and child abuse. Restraining orders are not enforced and only put you in more danger than not getting one for absolutely no reason. Judges don't care when presented with evidence and experts testifying that a child is being abused. Instead they want the want more time with the abuser so the child can be abused. The laws of Arizona are not upheld at any point. There is no one a person can count on. Other than leaving and getting themselves and their children help with the PTSD they suffer from which is not "cureable" and the trauma stays with them for the rest of their lives.

I am a summer homeowner in the county. I have had personal knowledge of the issues in this article. I am happy Navajo County is taking baby steps to remedy the neglect of family values. Unfortunately, there appears to be a culture of no follow up in the government departments. The excuse is NO Money. This applies to complaints made about junk, trash and debris in yards, dogs running wild and child neglect, and selling drugs. Not necessarily in this order because children are of utmost importance. If $$$ is the issue, raise taxes to fund much needed services. There seems to be a serious case of hopelessness in the families. There is very little opportunity for work so selling drugs is the best source of income. This plague on the area needs to be addressed. We can all work for a good day and a better tomorrow for this community.