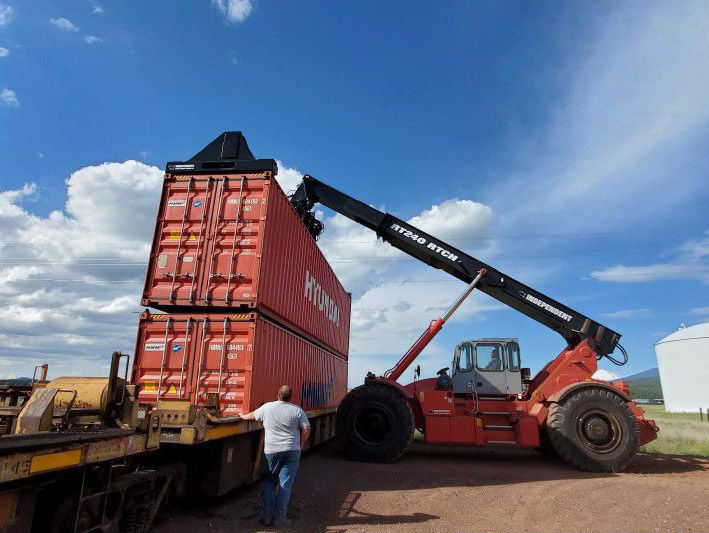 Fifty-eight shipping containers filled with wood chips from a thinning project near Flagstaff were sent to South Korea last year, where the chips sold for $80 per ton. Each one of those containers held about 24 tons of wood chips. A South Korean business may be willing to buy 500,000 tons annually. 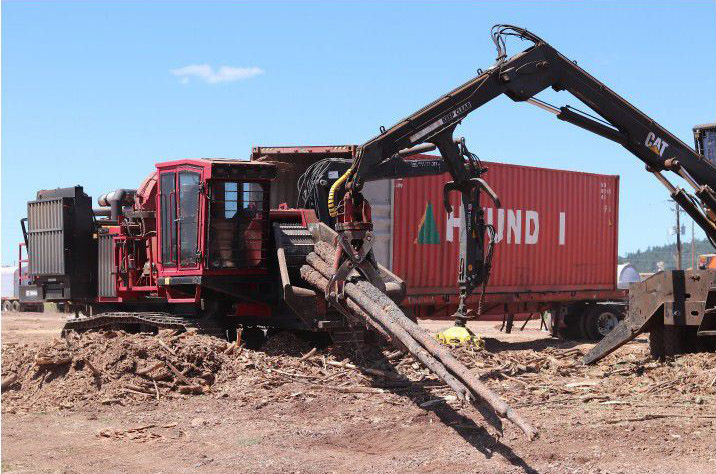 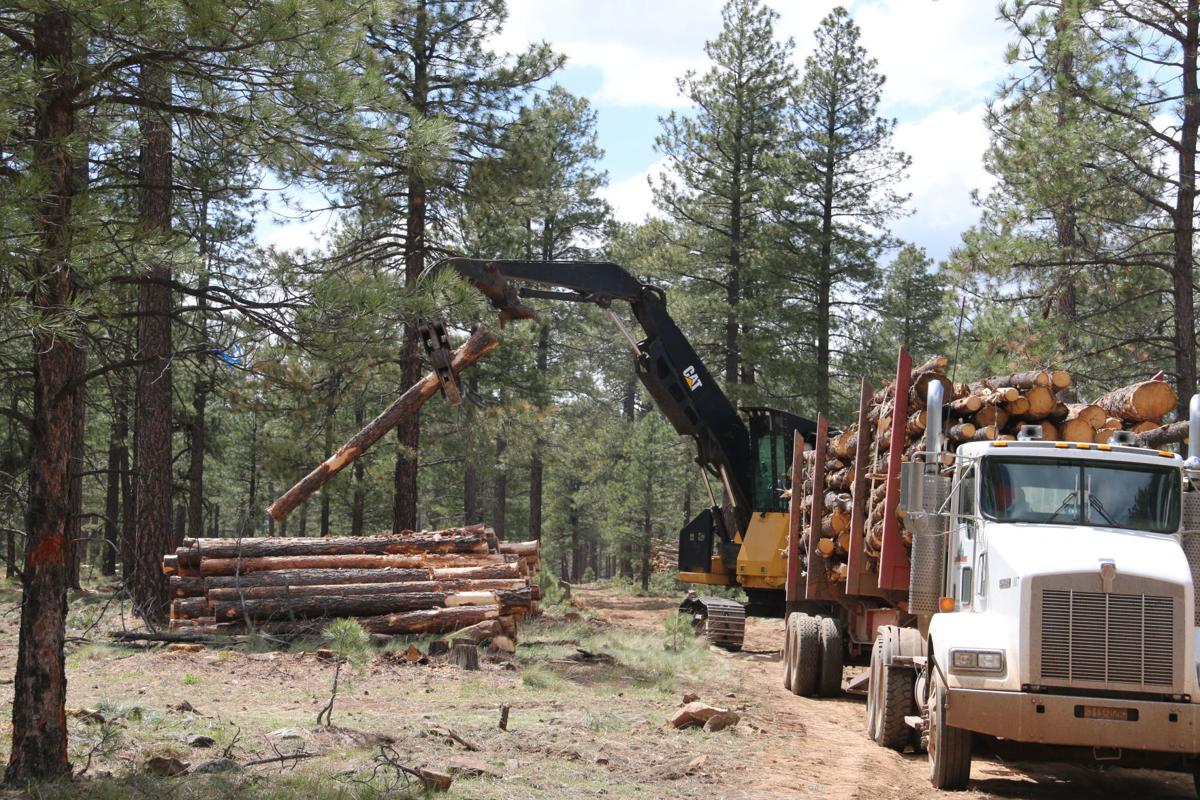 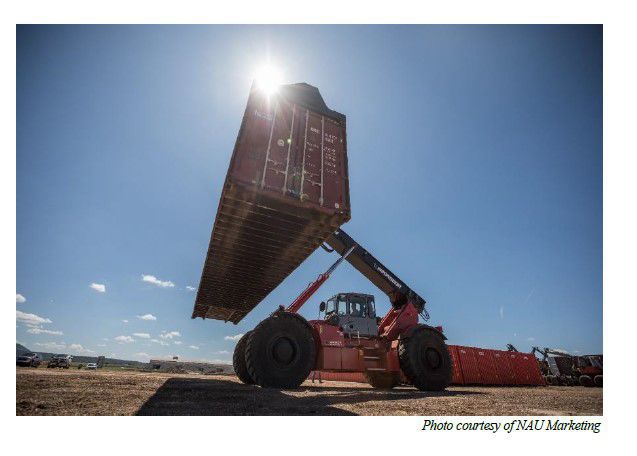 NORTHERN ARIZONA — This is gonna sound crazy. But maybe we can save the forest – and every town in it – by selling wood chips to South Korea.

But seriously – researchers at Northern Arizona University have done the math.

Heck, they’ve even filled 58 shipping containers with wood chips from a thinning project near Flagstaff and sent them on their merry way to South Korea, where the chips sold for $80 per ton. Each one of those containers held about 24 tons of wood chips.

Granted, they lost money on the deal. But this was a pilot project designed to determine whether selling wood chips overseas might solve the “biomass bottleneck” that has so far stymied large-scale thinning efforts in Northern Arizona forests.

The pilot project suggested a large-scale facility might well process the roughly one million tons of biomass that such thinning projects could generate annually.

The surprising study raises the possibility that wood chips could provide a market for the small trees and biomass that make up about half of the material thinning projects must remove to both restore forest health and reduce the odds of a town-destroying megafire, like the one that consumed Paradise, California, or the massive fires raging across Australia.

A century of grazing, logging and fire suppression has increased tree densities across four million acres in Arizona from about 50 per acre to about 1,000 per acre. Across the west, the size and power of wildfires has increased dramatically in the past 30 years – reflecting the impact of drought, warming temperatures and tree stress due to the unnatural densities.

The 4-Forests Restoration Initiative (4FRI) has for the past decade struggled to tackle that problem through thinning contracts. Despite the award of long-term contracts for hundreds of thousands of acres, contractors have managed to thin only a few thousand acres a year. To make a difference, 4FRI must ramp up to at least 50,000 acres of thinning annually.

So far, the biomass has posed the big problem. Early hopes utility companies would contract for enough biomass were dashed when the Arizona Corporation Commission refused to issue a biomass mandate for renewable energy. This year’s election for three ACC seats could change the balance, but contractors don’t currently have a good way to make money on the logs if they can’t find a way to get rid of the biomass.

The economists at NAU and others took on the challenge and actually raised $100,000 in grant money to undertake a pilot program to determine whether such an idea makes any sense at all.

So, here’s the thing. The global economy has developed a wonderfully efficient way to ship everything you can think of all over the globe. The key lies in the invention of standardized shipping containers that snap like legos onto trucks, railroad flatbeds and ships. Most of the world’s trade goods travel in just a couple of different types of containers – including a standard 8-foot-wide, 9.5-foot-tall, 40-foot-long “cube.” Modern container ships can carry 18,000 per trip. World-wide, about 38 million cubes are on their way to somewhere right now.

The United States buys a lot more stuff from the rest of the world than it sells. That means at least half of the shipping containers that arrive in the US return empty to places like China and South Korea.

So why not fill some of them with wood chips?

The pilot project grew from that seemingly simple question.

The backers of this bold idea convinced the federal government to let them use the Arizona National Guard’s 38,000-acre Camp Navajo facility near Flagstaff as the site for the experiment. Built to ship and store munitions during World War II, Camp Navajo has railroad spur lines connected to the Burlington Northern Santa Fe transcontinental line. It also has big concrete pads and other infrastructure needed to set up operations.

Next, backers struck a deal with the railroad to divert a 2,000-foot-long chain of rail cars loaded with 58 cubes off the main, transcontinental track on the spur line to Camp Navajo.

Next, they rounded up all the equipment they needed – including gear to unload logging trucks, feed the logs into a chipper and then spray the chips into cubes. They even had to build “bulkheads” to keep the wood chips from making it impossible to open the doors of the containers once they were loaded.

Finally, they had to get the now-loaded railroad cars hooked back into one of the stream of cargo trains heading for Long Beach, California, where the container were loaded back onto ships for the trip to South Korea.

The researchers detailed the endless stream of improvisations, work-arounds and clever solutions to unexpected problems. They noted that the whole thing could pencil out, providing contractors can make assorted improvements to Camp Navajo like laying an extra 8,000 feet of railway line, building a large-scale wood chipper, buying the necessary equipment instead of leasing it, ensuring the timely delivery of a sufficient volume of wood and a host of other details.

They didn’t directly address how far you could afford to haul the logs in a truck before getting to the chipping site. Each logging truck carries enough wood to fill one container. The wood for the pilot project came from a thinning project just 21 miles away. Most of the area in the 4FRI footprint lies much further from the site. But perhaps you could build other processing plants along the route of the railroad, which runs roughly along I-40 through the middle of the state.

However, the researchers pronounced themselves encouraged.

“While there remain many hurdles to overcome, results indicate that empty intermodal containers may open the possibilities of shipping wood chips and other forest products such as sawdust and lumber produced from small-diameter forest restoration materials.

Do it! Stop smoking us out with SO many prescribed burns and sell it! Great idea!

I'm pleased they are testing this idea. But I would like to know why Korea can use the chips efficiently and we, apparently, can't. I also disagree with the comment "A century of grazing, logging..." has caused an increase in tree density. It seems to me those two things would reduce the number of trees per acre.

A century of forest mismanagement!

Thank you for reporting this story. To Rep. O’Halleran and other elected officials: What are you doing to move this forward as quickly as possible?

Another great aspect of this plan is that we'd unload a few of the zillions of cargo containers that are piled up all over this country.

This is actually good news. Replacing the burning and smoke with the reasonable ideas mentioned in this article certainly would help our health!