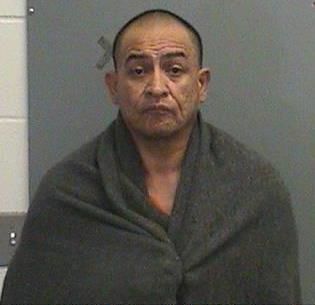 Police arrested suspected drug dealer Pete Anthony Chavez Jr., 50, of Winslow, on Sept. 22 with more than a pound of meth.

Police arrested suspected drug dealer Pete Anthony Chavez Jr., 50, of Winslow, on Sept. 22 with more than a pound of meth.

WINSLOW — Members of the Navajo County Sheriff’s Office Major Crimes Apprehension Team (MCAT) took more than a pound of crystal methamphetamine off the streets and busted a local man suspected of selling it.

Pete Anthony Chavez Jr., 50, of Winslow, was taken into custody at his home in the 200 west block of Mulberry Street Tuesday, Sept. 22. A press release from NCSO Public Information Officer Tori Gorman stated detectives found more than a pound of meth along with evidence like a large undisclosed amount of cash supporting suspicions that Chavez was selling the dangerous drug on the black market.

The estimated street value of the drugs seized during the raid is approximately $37,000.

NCSO deputies along with Arizona Department of Public Safety (DPS) detectives and members of the DPS Navajo-Apache Criminal Targeting Unit assisted in the Sept. 22 bust in Winslow.

“Methamphetamine is a powerful, highly addictive stimulant that effects the central nervous system. This dangerous drug can be swallowed, snorted, smoked and injected by users. Continued methamphetamine use causes changes in the brain that reduce coordination and impaired verbal learning. Not only does methamphetamine cause major health issues, overdoses can occur,” Gorman’s press release stated.