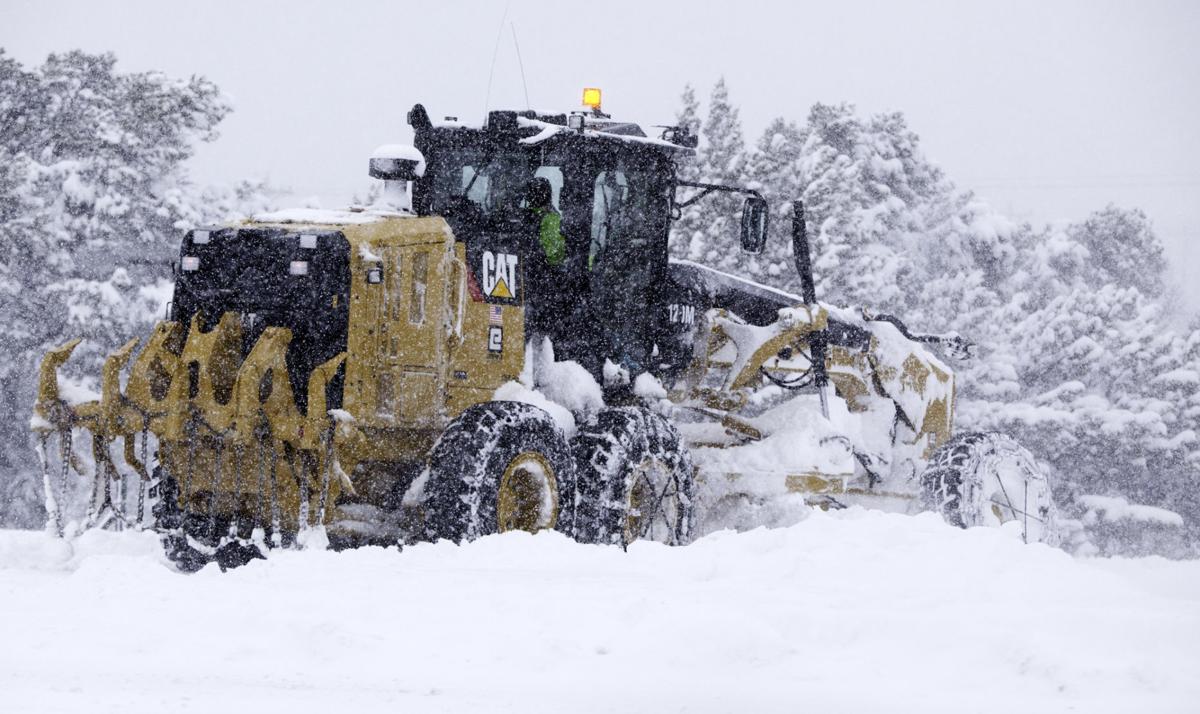 An Apache County road grader plows snow near the intersection of U.S. 60 and county road 3148 near the Y. Snow in the area was measured between 18-24 inches by Friday afternoon. After a long night of heavy snowfall crews were working on the roads most of the night and the next morning in nearly whiteout conditions on Feb. 21 and 22. 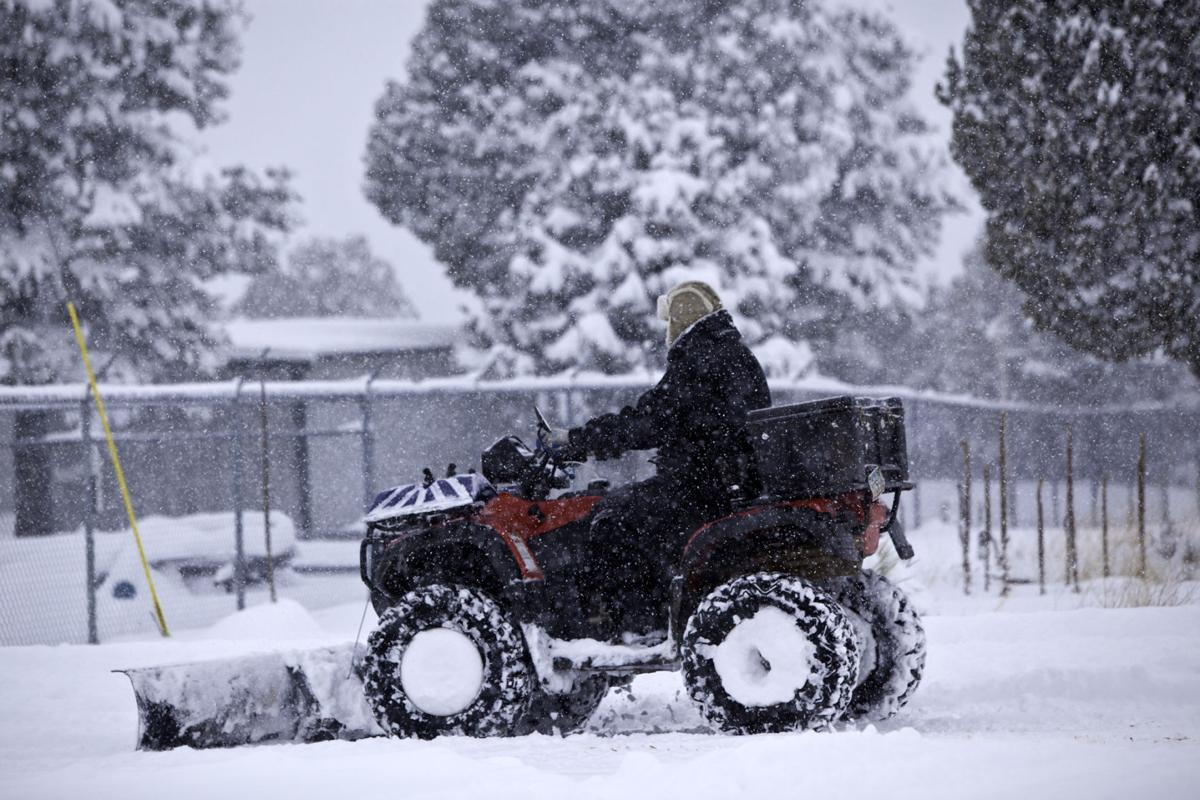 A man uses his personal quad at the intersection of U.S. 60 and Apache County Road 3148, before county crews arrived to clean up the area. Conditions were near whiteout when the main storm came through the night of Feb. 21 and in the morning and afternoon hours of Feb. 22.

WHITE MOUNTAINS — A monster snowstorm dumped record amounts of snow across portions of the state and double-digit inches throughout the White Mountains, closing several roadways and causing area governments to declare emergencies to free up additional resources.

According to the National Weather Service, Pinetop-Lakeside received 32-37 inches as of 8:47 a.m. Friday morning, 28 in Heber/Overgaard, and 24 in Show Low. In Apache County, Alpine received 17.5 and Concho and Eagar 9 inches.

Apache County Supervisors declared an emergency Thursday morning. The town of Payson did so as well, after more than three feet of snow fell on the community 90 miles southwest of Show Low.

U.S. 60 between Show Low and Globe and SR 260 between Payson and Show Low has been closed at different times. The latter opened around noon Friday after being closed for some time. Click this link for current road conditions.

Road crews and snow plow operators have battled through whiteout conditions to keep roads clear, but highways and road conditions have been dangerous. Area governments have cautioned drivers to keep off roadways, if possible.

"Arizona owes a big thank you to our first responders, snow plow operators and cleanup crews who are working around the clock to clear roadways and keep motorists safe," Gov. Doug Ducey said in Friday afternoon a press release. Arizona Department of Transportation has 400 operators working 12-hour shifts on over 200 deployed snow plows, according to the governor's office.

Flagstaff received over 31 inches of snow in 24 hours, a record for the city in that period of time. The state's all-time record snow depth came in Dec. 1967 when the "storm of the century" dumped 102.7 inches at Hawley Lake in the White Mountains. The Flagstaff airport reportedly had over 40 inches of accumulation at 11 a.m. today.

The American Red Cross has set up shelters at a few locations in northern Arizona to assist residents impacted by the storm:

The forecast calls for snow to continue — with less intensity — until early tomorrow morning. Temperatures are forecasted to be some-20 degrees warmer by mid-week next week.

• Slow down and drive for the conditions you’re in. Leave extra room between you and the vehicle in front of you.

• Make sure your vehicle is in good condition with working windshield wipers, heater and tires properly inflated.

• Make sure you have at least half to three-quarters tank full of gas at all times.

• It’s unsafe to park on the side of a highway to play in the snow. Highway shoulders are for emergencies.

• Never pass a snow plow! Slow down and be patient. If approaching an oncoming snow plow, slow down and give the plow extra room.

• Stay at least four car lengths behind snow plows and equipment. Plowed snow can create a cloud that reduces visibility, and spreaders on trucks throw salt or sand that can damage your vehicle. Watch for plows operating in multiple travel lanes or in tandem.

Big storm, but no record

Glad the region got all of the snow. Now some plow drivers need to learn the correct method of plow operation. DO NOT PLOW OPPOSING THE NORMAL TRAFFIC FLOW! Stay on the right side of the road and plow like every plow drive does. One plow operator does this in the City of Show Low and you know who you are. It is extremely dangerous to plow in the wrong traffic flow direction.

Headline: "Mountain gets over two feet."

What mountain? As someone who is familiar with mountains, I don't understand this misnomer for the area.

Most of us served by this newspaper live in the area of the Mogollon Rim, which is the southern extent of the Colorado Plateau.

Is this the same Arizona misnomer nabit as calling parts of the Sonoran Desert "The Valley?"