Phase II of the Show Low Bluff/Meadow Trail will continue approximately 2,000 linear feet along the west bank of the creek. It will continue all the way to Woolford Road near the Hampton Inn & Suites. 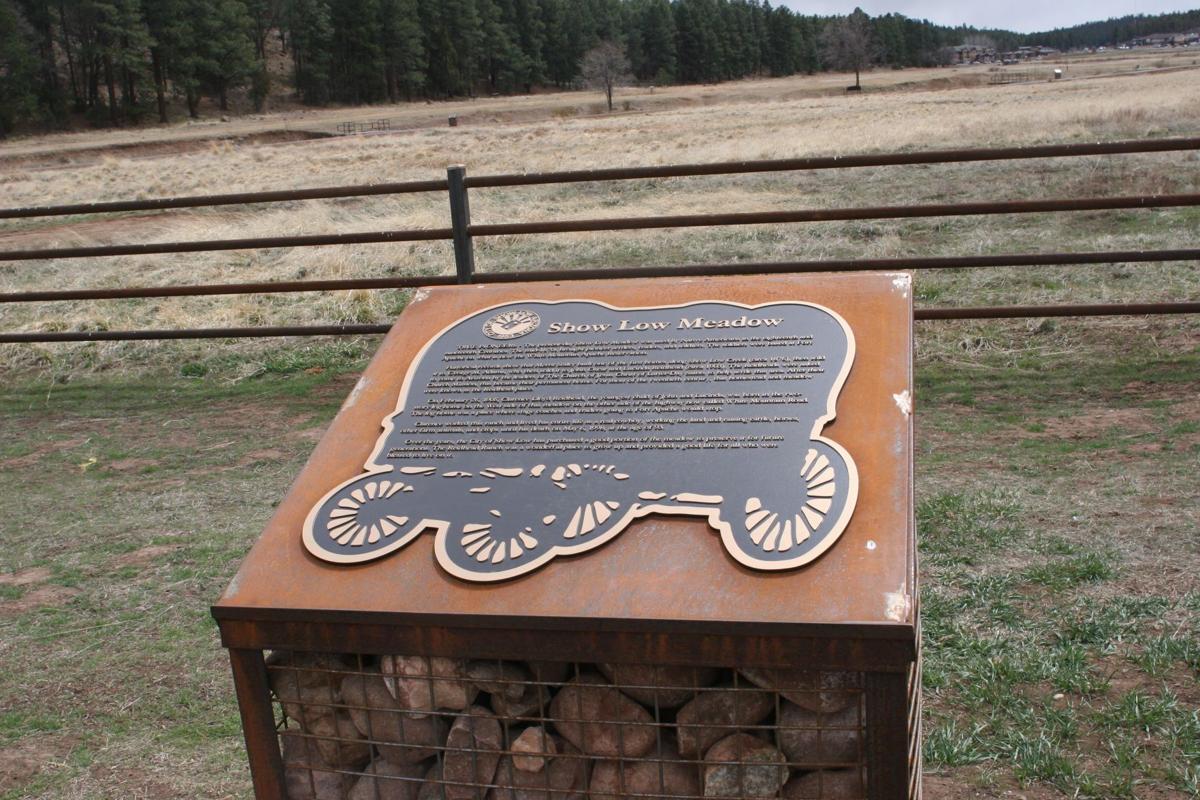 The bronze, commemorative plaque at the start of the Show Low Bluff/Meadow trail shares history of the area with roots going back to the mid-1870s.

Phase II of the Show Low Bluff/Meadow Trail will continue approximately 2,000 linear feet along the west bank of the creek. It will continue all the way to Woolford Road near the Hampton Inn & Suites.

The bronze, commemorative plaque at the start of the Show Low Bluff/Meadow trail shares history of the area with roots going back to the mid-1870s.

Phase II of the Meadow Trail is in progress. The trail will be continued to run about 2,000 linear feet south. It will follow the western bank of Show Low Creek, ending on the east side of Hampton Inn and Suites.

The trail will have an asphalt foundation to “ensure a high degree of safety for wheelchairs and other mobility devices and includes two bench seating areas,” according to city officials.

The trail project was made possible by grant funding in the amount of $150,000 which included a non-federal match from the city of Show Low, explained Show Low Administrative Services Director Justin Johnson.

“Everything we’ve seen on this meadow is 100% positive; doing this grant and extending the trail is one of the great things I’ve seen the city do for this meadow,” said Show Low Councilor Mike Allsop during the March 16 council meeting.

“When this thing gets across Show Low Creek it’s going to be amazing,” said Mayor John Leech Jr. “And, they will be bringing the horses back to the meadow.”

More about The Meadow Project

The Meadow is the area also referred to as the Show Low Bluff Trail, east of White Mountain Road/State Route 260 and the Wolford Road extension.

The 68-acre scenic area along Show Low Creek has undergone a number of improvements since last fall. The most visible to those driving by on State Route 260/White Mountain Road is the barn pavilion. It contains sheltered picnic tables, restrooms, landscaping. It is quickly becoming a landmark for residents and visitors to the White Mountains.

The Meadow and Show Low Bluff Trail also encourages fishing and is an official “Community Fishing” area through a partnership between the city of Show Low Community Services and the Arizona Game and Fish Department.

At the beginning of the trail, there is a commemorative bronze plaque that reads:

True Pioneers — The present-day Show Low Meadow was used by Native Americans in the eighteenth and nineteenth centuries. The mid-1870-s brought pioneer settlers, traders, and soldiers. The soldiers were based at Fort Apache on what is now the White Mountain Apache Reservation.

Historical records show that Merrit Staley built one of hte first homes along Show Low Creek (circa 1876), then sold it to George M. Adams, who then sold it to John Oscar and Lucinda Reidhead (circa 1903). The Reidheads were asked to come to Arizona by the leaders of The Church of Jesus Christ of Latter-Day Saints to help settle this area. After the Church Mission, this became their permanent home. For most of the twentieth century, this homestead and meadow were known as the Reidhead place.

On February 26, 1905, Clarence Lloyd Reidhead, the youngest child of John and Lucinda, was born in the two-story log home on the West side of this meadow on the highway now called White Mountain Road. The log home was a place where stagecoaches and traders going to Fort Apache would stop.

Clarence worked this ranch and lived his entire life as a real cowboy, working the land and raising cattle, horses, other farm animals and crops until his death on May 6, 1998, at the age of 93.

Over the years, the city of Show Low has purchased a good portion of the meadow to preserve it for future generations. The Reidhead Ranch was a wonderful place to grow up and provided a good life for all who were blessed to live on it.