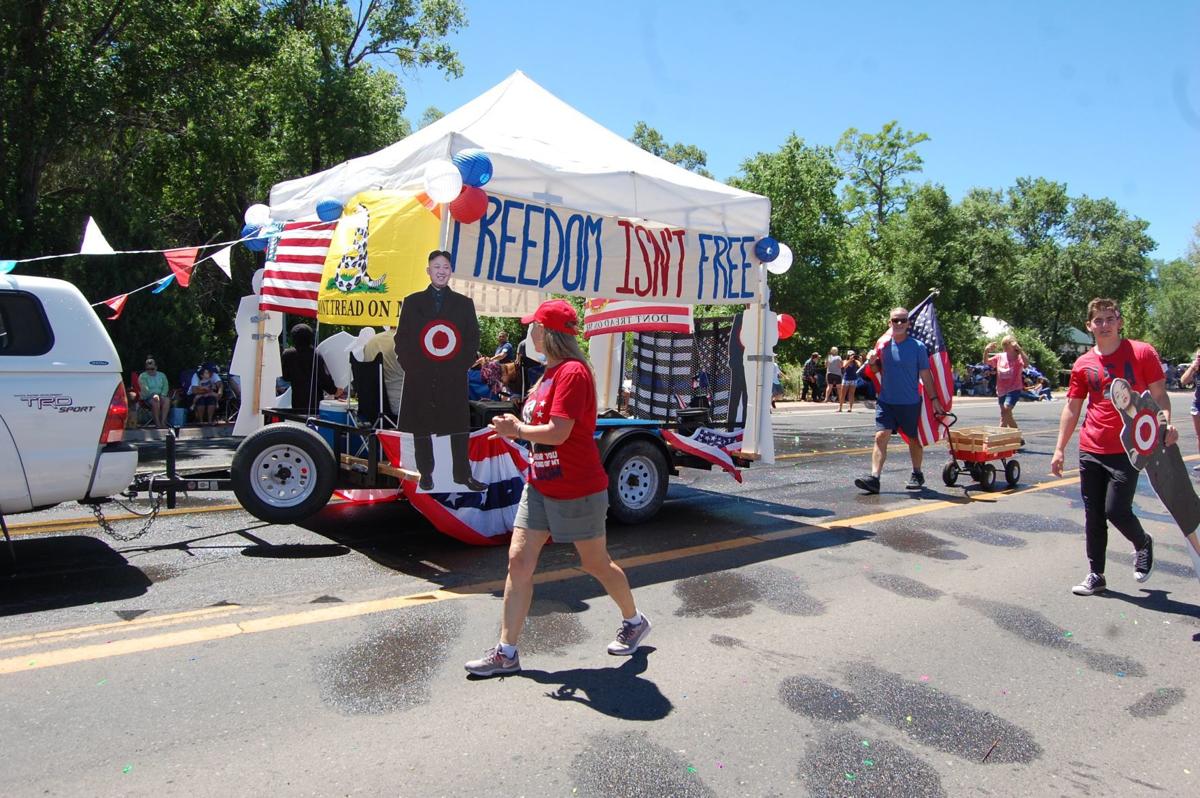 A controversial entry in the Independence Day parade in Round Valley included cutouts of individuals with bullseye targets on their chests, including former Secretary of State Hillary Clinton, Rep. Alexandra Ocasio-Cortez and Kim Jong-un, North Korean Chairman. 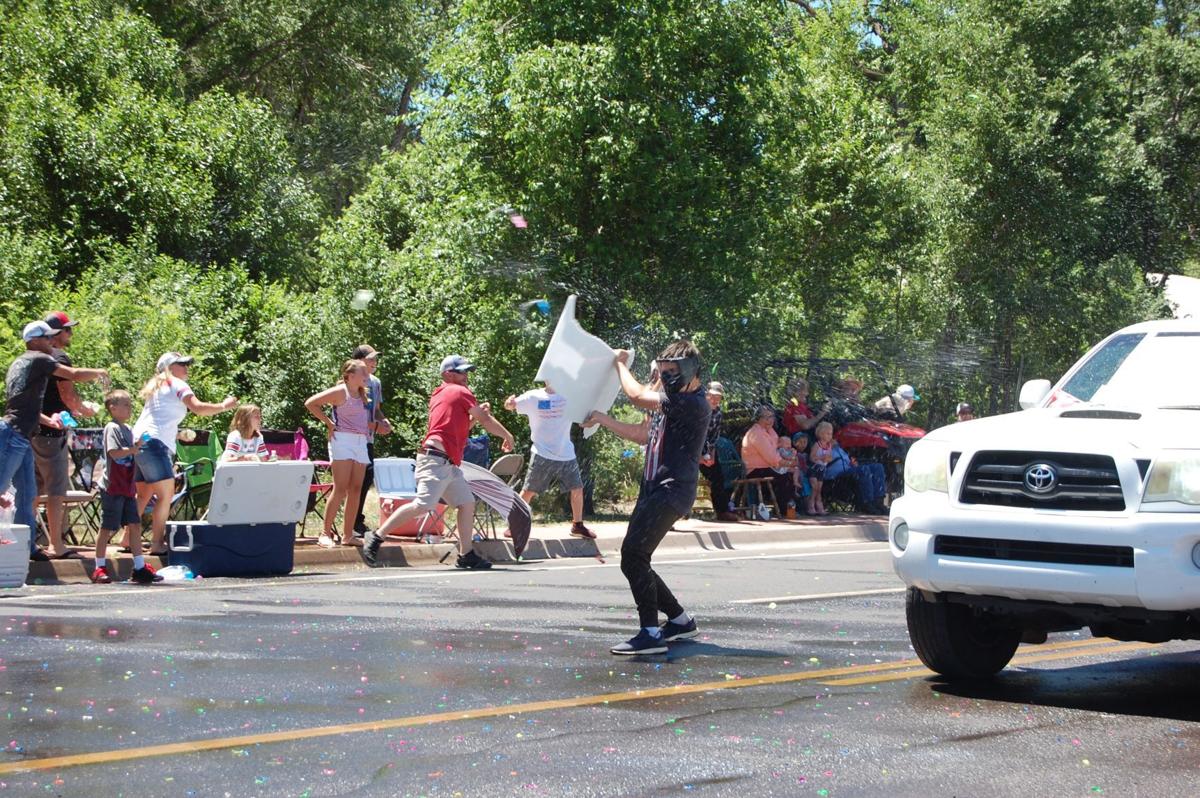 My wife and I attended the July 4th parade in Springerville this year.

We were shocked and deeply offended by the float entitled “Freedom is not Free.”

This display included life-sized images of national public figures including US Congressmen with large red targets on their chests. Young people gleefully presented these images to the spectators encouraging people to throw objects at the people imaged.

The entries were judged by parade judges at 9 a.m., and this “Freedom” entry was judged to be the best float by officials.

Although these judges were considered not part of the Chamber, surely Chamber members were aware of this entry before the parade, during judging, and during the course of the parade. The Chamber parade sponsors and all officials associated with this the parade share responsibility.

I understand the Chamber may have issued an apology but I have not been able to find it on the internet, in the newspaper or on your website.

If an apology was issued, I applaud this act, I don’t believe any consequences for those responsible for this float have been publicized.

At the least, the act of inciting violence against public officials is a federal crime. It would be appropriate to issue a formal report of this event to the Sheriff’s Department.

A public apology and identification of and reprimand of the individuals involved with this float and judges who allowed and encouraged this float should be made available to the public, the White Mountain Independent and Sheriff's Department.

How was this even allowed? You can look at the mental midgets that okayed this ignorant display.

Azhunter, apperantly, you republicans call ALL our government run military services, all our government run veterans services, government run Medicare, Social Security, Medicaid,government aid to farmers and ranchers, and all the services provided the American people by city, county, state, federal governments as "socialism" and you republicans want to abolish them. Of course, it stands to reason that you republican have never read the constitution and in your ignorance, don't know that the purpose of our government is as stated in text in the Preamble and in Article 1,section 8,clause 1, to "promote and provide for the general welfare" of "we the people," of the united States. Moreover, what the republican party has long pushed for is "Fascism" to weaken our government to the point that it can be used to do the bidding of multinational corporations and the wealthy.

So let me guess Fred, it would have been ok if it was pictures of Trump depicted instead of the enemies of America? Your letter would be commending the float makers if it allowed people to disrespect the office of the President? Besides you obviously missed the point, They live in America where they have the FREEDOM to make and display such a float and where you have the freedom to complain about it. So I would suggest you take a chill pill and get over yourself. 'MERICA! [love]

Amen and I don’t understand how this liberal socialist democrat who are ok with all of these socialist liberals democrat wasting our taxpayers money on a witch-hunt and they are upset because they speak the truth and President Trump has done more for our country than any of past Presidents and he will go down as one of the greatest President along with JFK,Regan

Donald Trump a Fascist,a narcissist, a pathological liar,a misogynist, a self admitted sexual predator, a defender of child molesters,a draft dodger, a racist,a financial swindler, a demagouge traitor of the United States of America.What the brain dead republicans that put together this float in Springerville are saying for their 4th of July message, is that they endorse and applaud the Russians attacking the United States of America with cyber warfare. They endorse Trump and his refusal to defend our country in violation of the "Presidential Oath of Office" that he took. Moreover,these Anti-American republicans also applaud that Republican Senate Majority leader Mitch Mconnell would not allow two straight forward bi-partisan House of Reps bills to fund a defense against cyber attacks of our United States electoral system. Patriotism is defending our country from attacks by our enemies. Republican politicans refuse to defend our country. I hope the residents of Springerville, will stand up and disavow the unpatriotic calls for violence and racism that occurred in their July 4th parade, after all, from the time of our founding fathers, Americans of all races, religions, and political affiliations have fought and died defending, our country, the United States of America. Politics should be set aside for another day,the 4th of July is when we celebrate our country's independence and the american people who have protected it for over 200 years.

Well, that was an uglier 4th of July than it had to be, right?

he comes AL again we have a right to our opinion. and we vote! some of us voted for Trump and we are glad he is in office. and he is a dang sight better than Obama. You sir are always rude.

The cheeto Trump has numerous times stated he loves North Korean dictator Kim Jung Un as well as his public admiration for authoritarian Vladimar Putin because they kill or jail political opponents and the news media.

It is my view that propaganda is to democracy as book-burning is to education. It is a highly successful, universal informational tool used by nearly everyone to persuade others to draw conclusions which cannot be documented by science or which represent unverifiable claims related to tribalism, racism, homophobia or other such manifestations of ignorance. In fact, propaganda is simply advertising raised to the highest level of incredulity while masked as truth. Examples are: the tobacco companies' denial of the health hazards of smoking; the Nazi characterization of Jews as a subhuman evil; the claim that the product is "new and improved, when only the packaging has been changed; the pseudo-scientific claims that global warming is non-anthropogenic; any claim of racial superiority; the false assertion that Socialism is present in the American economy; the false equivalency of Socialism and Liberalism; the lie of economic vitality about our current failed economy; the lie that vaccinations cause autism; the false claim that sexual orientation is a disease or a choice, and much more. Telling lies is a universal human failing which we all must live with. There is a point, however, when lying becomes propaganda and that is very, very dangerous. That is reached when lies are weaponized and broadly spread by every available means in order to spread confusion, sow doubt and subvert the ordinary processes of fact-finding in society. Its ordinary outcomes are hatred and fear. It seems to me that the float in question is a trivial, ignorant propaganda tool which ought to be ignored. I am certain it is protected by the First Amendment. After all, no prosecutor is going to make a charge in a matter which has already been ruled upon by the Supremes(A picture of the flag is not the flag and can, therefore, be desecrated to one's heart's content). A felonious threat would have to be more specific; although, it might be construed as incitement. To be certain, I deplore the ignorance and hatred underlying the device, as well as the plight of the children exposed to such backwater exhortations to violence. Therein lies the real tragedy--the intellectual stunting of childhood growth and development by such degrading exposures. Remember those oh so prescient words of Rogers and Hammerstein from 'South Pacific': Oh, you've got to be taught Before it's too late Before you are six or seven or eight To hate all the people your relatives hate Oh, you've got to be carefully taught.

Ronzim. I could of not said it better! Thank you for sharing!

Glad to see some 'comment deleted' notations here. Better than deleted w/no note about it. Would be better yet if the screen name of the poster was left in so he knows what goes over the line.