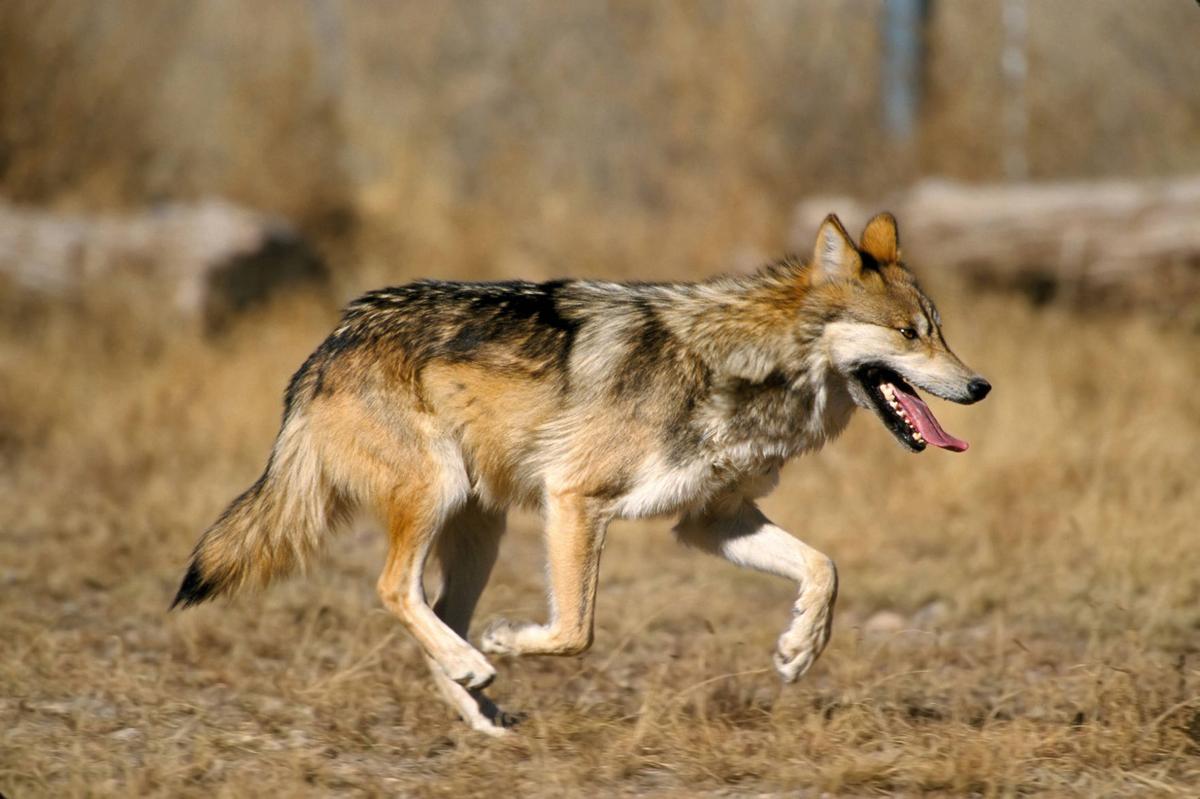 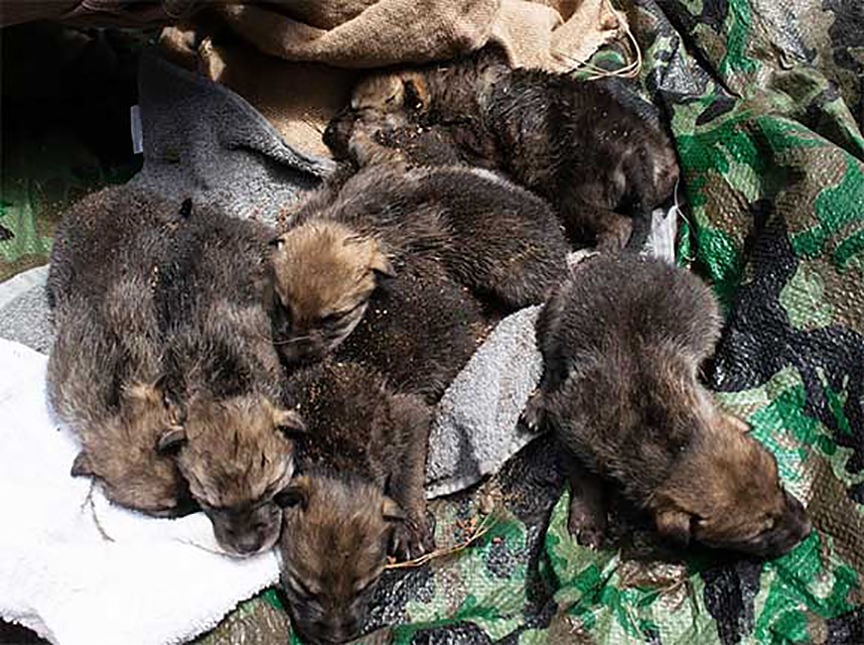 Captive-born Mexican Gray Wolf pups are mixed together with wild-born pups before being placed into a wild den in Arizona.

Captive-born Mexican Gray Wolf pups are mixed together with wild-born pups before being placed into a wild den in Arizona.

This year, the U.S. Fish and Wildlife Service introduced 20 wolf pups born in captivity into the dens of wolves roaming wild in Arizona and New Mexico.

On the other hand, the federal government also killed a hard-luck, three-legged wolf for preying on cattle – one of 25 wolves killed by federal hunters since the program started in 1998. Biologists have recaptured another eight wolves and another 22 have died accidentally as a result of capture operations. The federal government this year killed a record five wolves that were deemed a danger to people or cattle.

However, ranchers say the wild wolves kill dozens of calves and cows every year. They say 2020 will likely set a record for livestock losses, with more than 100 deaths already – mostly calves and a few cows.

Meanwhile, the U.S. Fish and Wildlife Service continues to solicit public comments on the management plan for some 163 wolves that roamed the White Mountains and western New Mexico in the last full census. Key questions include whether to release more captive-reared wolves into the wild.

The FWS has also issued a reward for information leading to the arrest of someone who killed two Mexican Gray wolves near Pinetop earlier this year. Humans – including cars – remain the leading cause of death among grey wolves in the wild.

The sad fate of the alpha male of the Saffel Pack in Arizona illustrated the toothy dilemmas posed by the management of the once-widespread, now endangered subspecies of the gray wolf.

The Saffel pack alpha male had last year lost his leg in a leghold trap. Game and Fish biologists found the wolf in a trap, anesthetized him and did an emergency surgery to remove his mangled leg. In November, they released him back into the wild.

However, a month later the wolf left his pack – shortly after the death of his daughter from unknown causes. Now alone and crippled, the wolf took to preying on much-easier-to kill livestock.

This prompted federal hunters to put a sniper in a helicopter, track him down by the signal from his radio collar and kill him from the air.

“The wolf father’s horribly unfair fate offers us a peek at the broader tragedy of heavy-handed wolf management,” said Michael Robinson, with the Center for Biological Diversity, which has filed appeals to change management policies in the program. “After his injury, he had to hunt alone on three legs, so he turned to livestock. He was too smart to be caught in a trap again, but he couldn’t outrun his radio collar and an aerial sniper.”

On the other hand, the FWS also recently announced banner year for its efforts to place captive-born pups in the dens of wild mothers. The strategy of “cross-fostering” is intended to provide as much genetic diversity as possible. All of the 163 wolves in the wild and an even larger number of wolves in captivity are descended from seven Mexican Gray Wolves captured in the wild decades ago.

Ironically enough, federally supported predator control programs between 1915 and 1925 exterminated most of the Mexican Gray Wolves in the wild. The 1976 passage of the Endangered Species act shifted the priority to save the last remaining wolves.

The federal government bred the surviving wolves in captive breeding facilities, including the Phoenix Zoo.

The release of adult wolves in the wild proved controversial. The survival rate was relatively low and the captive-reared wolves weren’t as likely to avoid humans and more likely to prey on cattle. The federal government struggled for years to establish relatively stable wolf packs able to reproduce in the wild – but soon faced the problem of a genetic bottleneck.

The cross-fostering program offered a way to boost the population while injecting more genetic diversity. Biologists found that the wild mothers would accept new pups – providing they were the same age as her own pups and smelled the same. Biologists found they had a heartening success rate if they precisely matched the age of the captive-reared pups – and took the precaution of smearing the interlopers with feces and urine from their new foster siblings. The wolf parents almost always switched dens after the disturbance, but generally raised the new pups as their own.

Of the 90 pups born and released, 52 survived their first year. That sounds bad – but it’s actually better than the 50 percent survival rate of wild-born pups. So far, none of the mothers have actually rejected the foster pups.

However, the biologists also removed two of the wild pups from their den and shifted them back to the dens of captive wolves, part of the ongoing effort to ensure genetic diversity. Unexpectedly, the captive wolf pack killed the two pups as well as two of their own pups, according to documents released by the FWS.

This year, federal biologists placed 20 pups in wild dens, including 12 in Arizona and eight in New Mexico. They had to operate in the midst of the pandemic – which means helicopters delivered the foster pups without the pilots ever getting out of the aircraft.

The FWS still faces a legal challenge to its 2017 overhaul of the wolf recovery plan. Groups like the Center for Biological Diversity and others filed appeals, saying the FWS had ignored the recommendations of its consulting biologists.

Environmental groups say the federal government has proved far too willing to kill or remove “problem wolves” that prey on livestock or don’t show sufficient fear of humans. Since the start of the reintroduction effort, project managers have killed 25 wolves and returned another eight to captivity.

The environmental groups hope to force an expansion of the reintroduction area and change its management techniques, as originally recommended by federal biologists. Ranchers in the region fiercely oppose the recommendation, saying the federal government doesn’t adequately compensate them for livestock losses to the wolves.

The current plan stresses the cross-fostering approach, with little or no release of adult, captive-reared wolves into the wild. Federal biologists say the newly released wolves are less likely to prey on livestock if taught hunting skills and aversion to humans by their wild-born parents.

However, some environmental groups say that approach is too slow and expensive – especially when the federal hunters continue to remove so many wolves from the wild. They want to return to the release of established, captive-reared family groups, since those family bonds remain essential to the success of wolf packs.

“The clock is ticking on the Fish and Wildlife Service’s court-ordered review of its wolf-management rule,” said Robinson. “If the agency reauthorizes anything like the current heartless mismanagement, we’ll see them in court again. Mexican wolves would recover if the Service would just release them as families into the wild and then let them live with no persecution.”