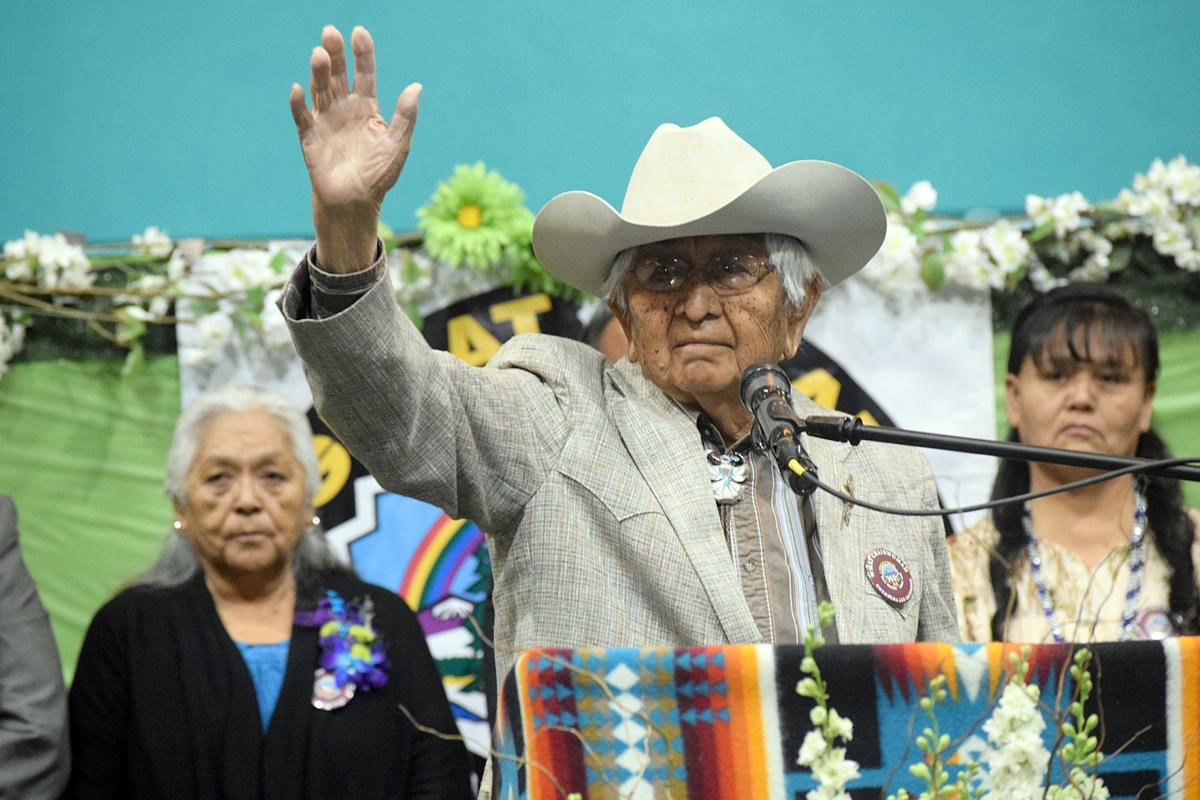 Longtime White Mountain Apache Tribe Chairman Ronnie Lupe waved goodbye at the inauguration of chairwoman Gwendena Lee-Gatewood in May of 2018. As Lupe waved to the crowd, the people returned the favor by giving him a long standing ovation. 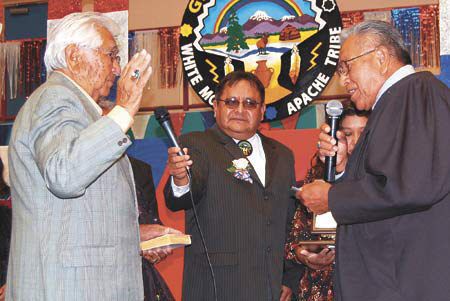 White Mountain Apache Judge Kay Lewis administers to the oath of office to Chairman Ronnie Lupe in May 2010. 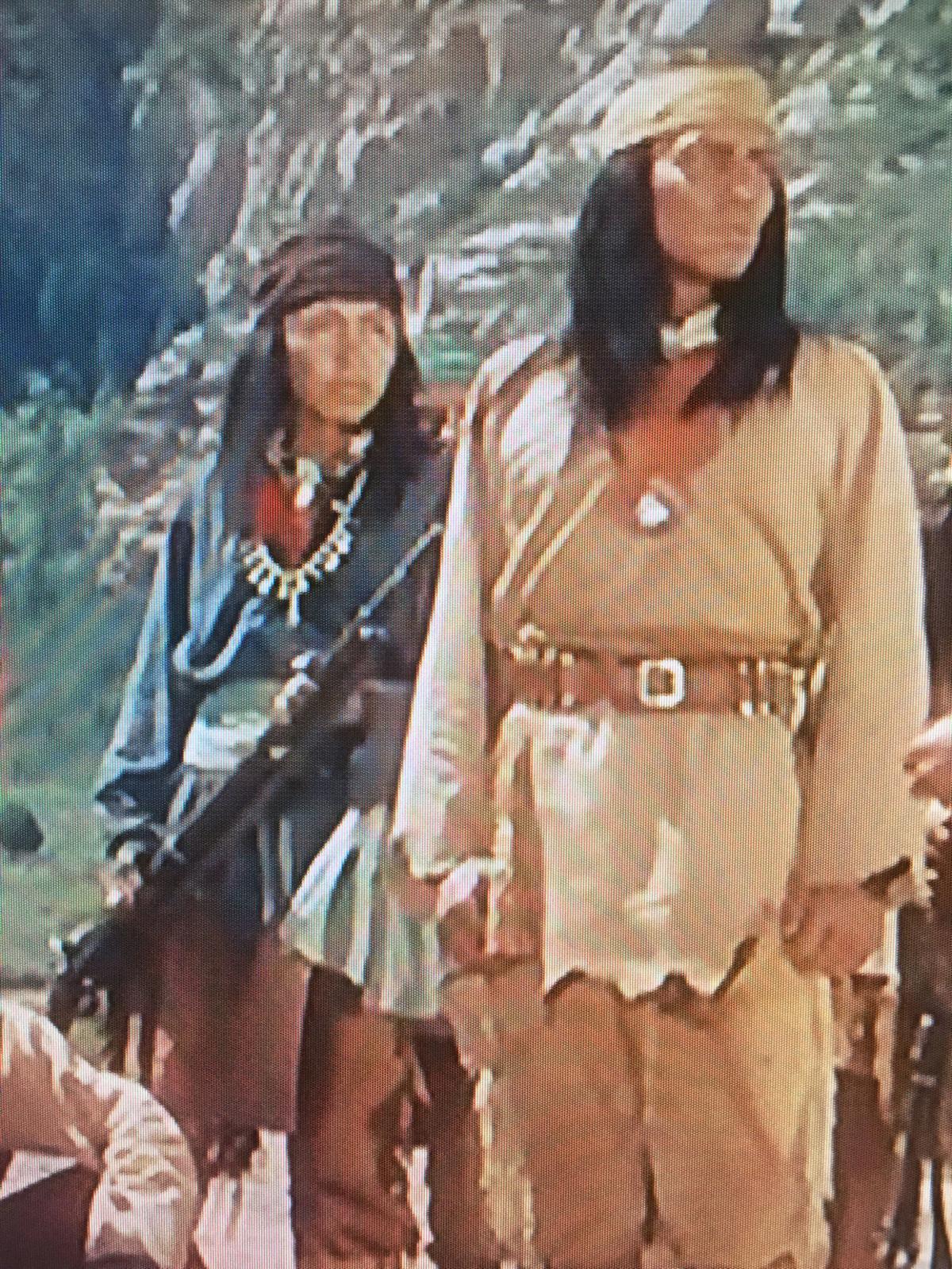 This screenshot of the 1950 movie “Broken Arrow” shows a 20-year-old Ronnie Lupe (left) during a scene with actor Jay Silverheels, who played Geronimo. The movie, which was nominated for three Academy Awards in 1951, starred James Stewart and Jeff Chandler and was filmed mostly in Sedona.

Longtime White Mountain Apache Tribe Chairman Ronnie Lupe waved goodbye at the inauguration of chairwoman Gwendena Lee-Gatewood in May of 2018. As Lupe waved to the crowd, the people returned the favor by giving him a long standing ovation.

White Mountain Apache Judge Kay Lewis administers to the oath of office to Chairman Ronnie Lupe in May 2010.

This screenshot of the 1950 movie “Broken Arrow” shows a 20-year-old Ronnie Lupe (left) during a scene with actor Jay Silverheels, who played Geronimo. The movie, which was nominated for three Academy Awards in 1951, starred James Stewart and Jeff Chandler and was filmed mostly in Sedona.

WHITERIVER — Ronnie Lupe, who served as the chairman of the White Mountain Apache Tribe for nine terms — 36 years — has died. He was 89.

Lupe served his country as a Marine during the Korean War, and then went on to serve the tribe as a tribal councilman and as tribal chairman.

Lupe had been involved with the WMAT tribal council since 1966 — give or take a term — and is credited with developing the concepts for Hon-Dah Resort Casino and Sunrise Park Resort — major drivers of the tribe’s and region’s economy — among other things.

Anthony Cooley, who helped operate tribal elections for 24 years, noted that Lupe was gracious whether he won or lost an election.

"He always came and thanked us," he noted.

As chairman of WMAT, Lupe was well-known among local, state and national elected leaders, especially those in the halls of Congress.

Lupe is credited with helping the tribe retain its sovereignty and rights to its land and resources. He helped testify for the passage of legislation such as the White Mountain Apache Tribe Water Rights Quantification Act of 2009, which helped establish a reservation-wide system for clean drinking water. He also signed and helped put together the “Statement of Relationship” policy in 1994, between the tribe and the U.S. Fish and Wildlife Service, which recognized “the tribe’s aboriginal rights, sovereign authority and institutional capacity to self-manage its lands.”

This event also led to the passage of the Joint Secretarial Order 3206, known as the American Indian Tribal Rights, Federal-Tribal Trust Responsibilities, and the Endangered Species Act in 1997, which concluded that “the federal government’s responsibilities under the Endangered Species Act, recognizes the exercise of tribal rights, and ensures that Indian tribes do not bear a disproportionate burden for the conservation of listed species.”

“I was able to meet some of the top leaders in the nation due to the (representation) of my people back home,” Lupe said. “The joy that I have had, the energy that everybody has. This country has given me a lot,” Lupe said in a 2017 interview with the Independent.

WMAT Chairwoman Gwendena Lee-Gatewood announced Lupe’s passing on Facebook in the early morning hours on Monday. She served as his executive assistant from 2006-2018. He endorsed her candidacy for the seat of tribal chair.

“The White Mountain Apache Tribe has lost one of its greatest leaders this morning. Former Chairman Ronnie Lupe had an illustrious career in the development of the Tribe and Indian Country,” she wrote.

“Today he's gone home and we've lost one of the most influential, courageous and profoundly good human beings that any of us will share time with on this Earth. He no longer belongs to us; he belongs to the ages. Through his fierce dignity and unbending will to sacrifice his own freedom for the freedom of others, Ronnie Lupe transformed The Tribe and moved all of us,” she added.

Lee-Gatewood expressed sympathies to the family, ordered all flags on the reservation to fly at half-staff and cancelled the Supervisor’s meeting, and declared a day of administrative leavein honor of Lupe’s passing.

“For now, let us pause and give thanks for the fact that Ronnie Lupe lived, a man who took history in his hands and bent the arc of the moral universe towards justice. May God bless his memory and keep him in peace. It has been an honor and privilege to work for him. I remain forever grateful for his teachings, vision and philosophy. He will be missed,” she wrote.

Just two years ago, Lupe was honored for his long career in public service by Navajo County. As he announced his intention to retire and not seek a tenth term in office, he told the Navajo County Supervisors, “I am still young yet.”

Lee-Gatewood commented on his military service and accomplishments.

"He was an illustrious leader,” she said. “I know the people love him very much. He served the tribe for 54 years in leadership and served with the First Marine Division, 3rd Battalion, Ida Company, First Marine Regiment. He was a Korean War veteran and was given special recognition by (Arizona) Governor Jack Williams on the Arizona Commission of Indian Affairs in 1968, and was elected as the first vice president of the National Congress of American Indians in 1969 and 1970,” she said.