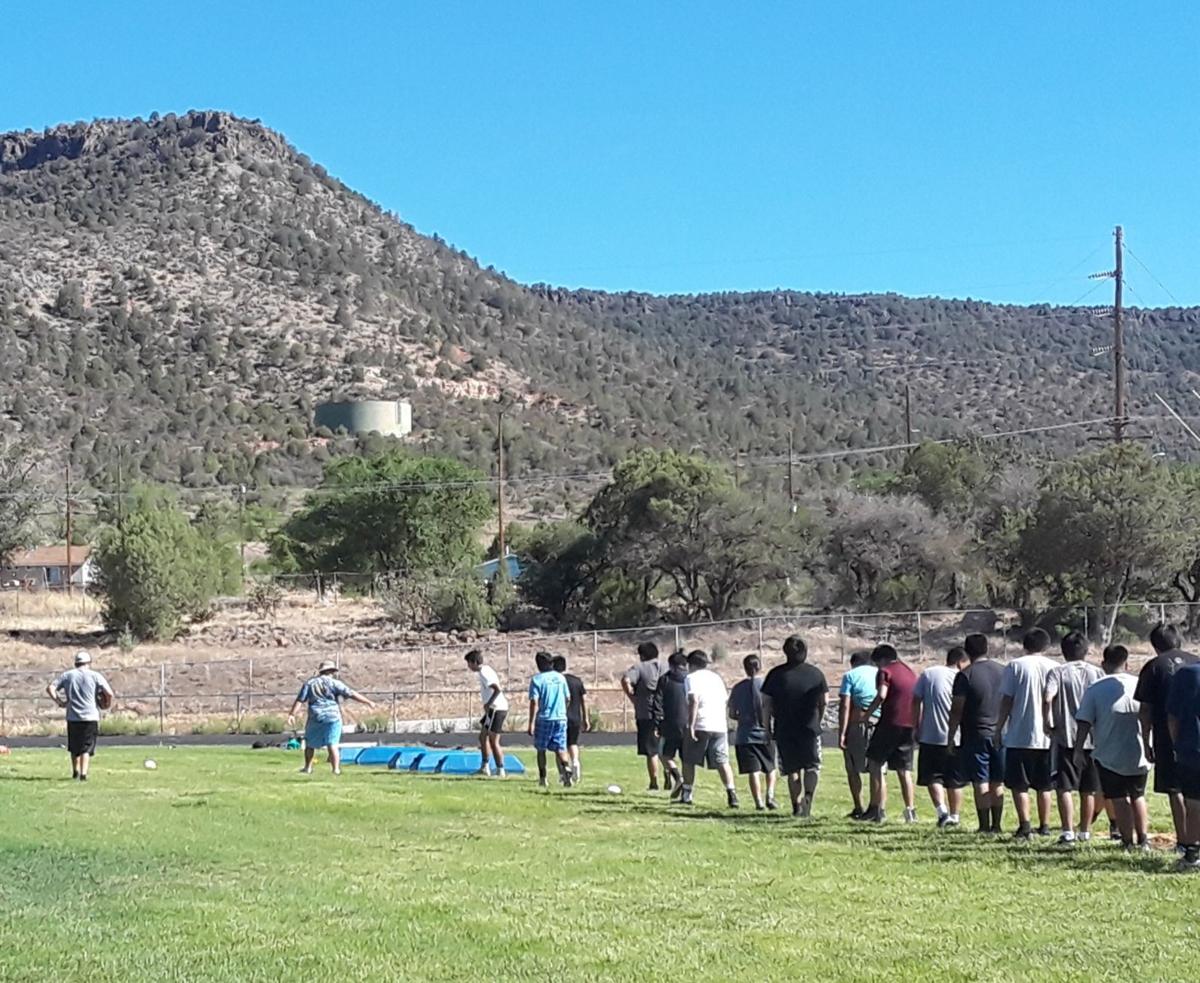 Coach Brandon Newcomb watches Alcehsay football players run through high knee drills during a workout with A Mountain in the background. 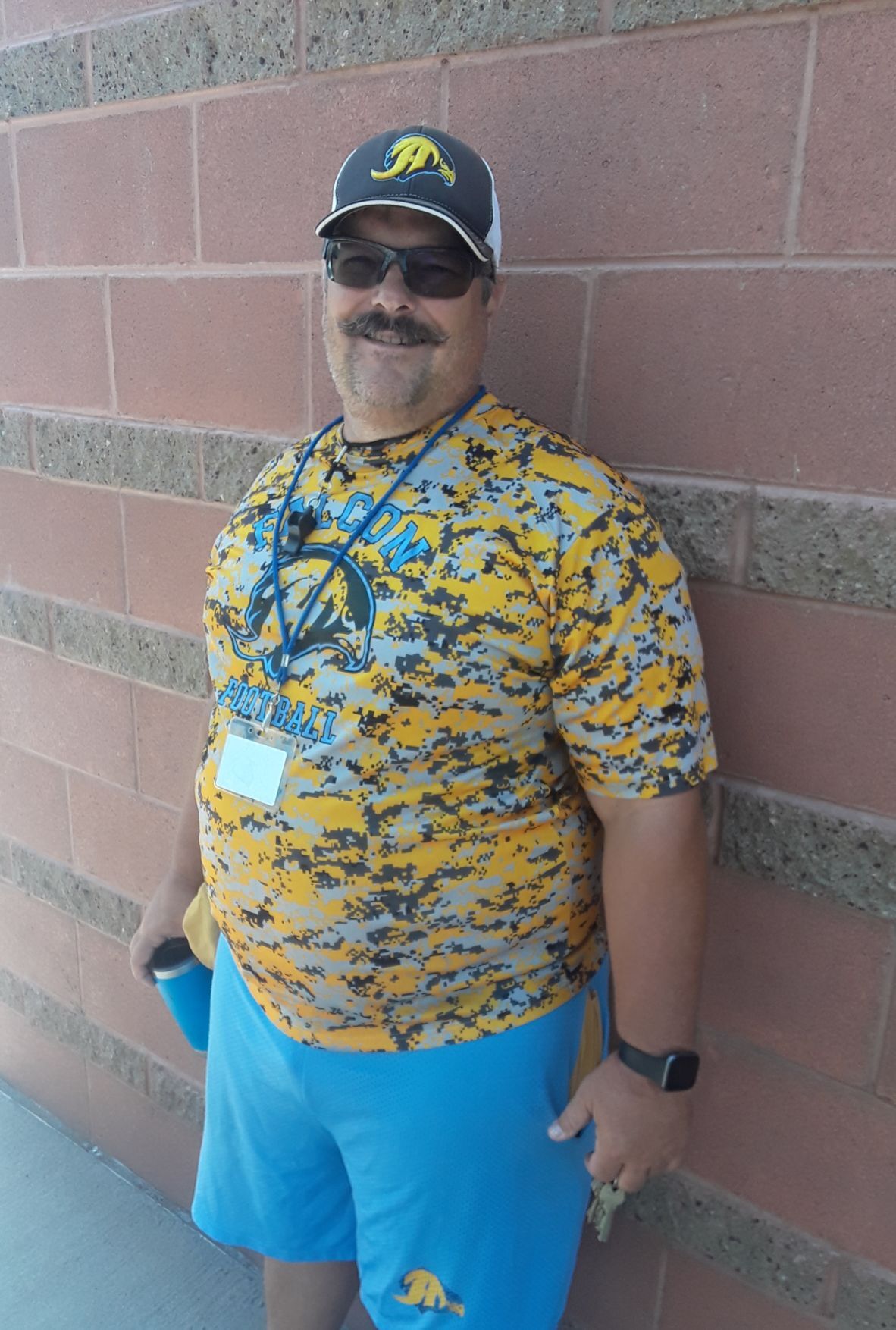 Coach Brandon Newcomb watches Alcehsay football players run through high knee drills during a workout with A Mountain in the background.

WHITERIVER — As spring begins and flowers start to bloom on the Mountain so does the start of a new high school football season.

The Alchesay Falcons football program has plenty of work to do after sitting out last season due to COVID-19 restrictions.

Training camp will begin on Aug. 2 for the Falcons at Fred Lewis Field, and the first game will be played on Aug. 27 at home versus the Window Rock Fighting Scouts.

Coach Brandon Newcomb stated, “We’re all looking forward to the season opener versus Window Rock with both teams sitting out last season.”

The last time the Falcons played football was on Nov. 8, 2019, in a first-round playoff game at Phoenix Christian. The Falcons lost 62-6.

Getting past the first round in the 2021 season is on top of the to-do list for Alchesay. The 2019 Alchesay Falcons were regional champs with a 9-2 record and undefeated in regional play.

With players like Tyreck Cosay and Kellen Parrish having graduated the year before, the Falcons needed someone to step up. They quickly found that player in first-team all-state running back Davin Parker, who rushed for 2,030 yards and found the end zone 26 times to lead his team.

Many others like Preston Ortega, Fredrico Riley, JT Kessay and Elisha Walker all put their names in the Alchesay Falcons record book as well as winning four straight regional titles.

Many people were divided over if Alchesay should’ve played any sports during the COVID-19 pandemic. Many Alchesay student-athletes lost their chance at bragging rights amongst their peers as well as their family members.

As the Falcons begin practicing again, Newcomb is reminded of his first year at Alchesay with the feeling of starting all over.

Newcomb, back then and now, has noticed the school has some big players.

“So we’ll play to our strengths which is a run-heavy offense to go with that big offensive line,” he said. “Being a power run team is our motto.”

Falcon running backs have always been the key to Alchesay success if it’s a matter of controlling the game or running away with it. Stacking the line and stopping the run will be the key for the defense. Defensive line is where it starts for a defense.

Defensive tackle and defensive ends are the first line of defense. With the way football is being played on any level, linebackers have to be just as fast as the running backs and receivers and just as strong as the linemen coming to block them.

Defensive backs should be the best conditioned athletes on the field running full speed every play.

As the Whiteriver community aches for a sense of normalcy, the Falcons will spread their wings and light up A Mountain once again.

It’s a tough road ahead for the Falcons but the coaching staff is up to the challenge.

“Having my coaching staff intact helps us focus on the players and knowing what job we each need to do,” Newcomb said.

Having the support of the Alchesay High School staff and its basketball coaches goes a long way at Alchesay.

“It’s on us as a football team to be successful to get the attention of the community. Building trust in each other takes time, time that most high school football teams don’t have. Getting back to the fundamentals and remember what the feel of competition feels like should get the players’ blood pumping again,” he said.

The Falcons will be looking for their fifth straight Little Colorado regional title. With the St. Johns Redskins and Holbrook Roadrunners in the same region, the Falcons will have their work cut out for them. The Apache Bowl will be renewed with the San Carlos Braves coming to Whiteriver to battle the Falcons on Sept. 2.

Attacking, fighting and defending is what this football team can inherit from the proud indigenous people who lived in these mountains for centuries. Getting the chance to rewrite the family record books every Friday night is what the community has missed. Win or lose, personal stats sheet will be highlighting dinner tables and tailgate conversations throughout the town. Alchesay Falcons football is back and ready to fly high.