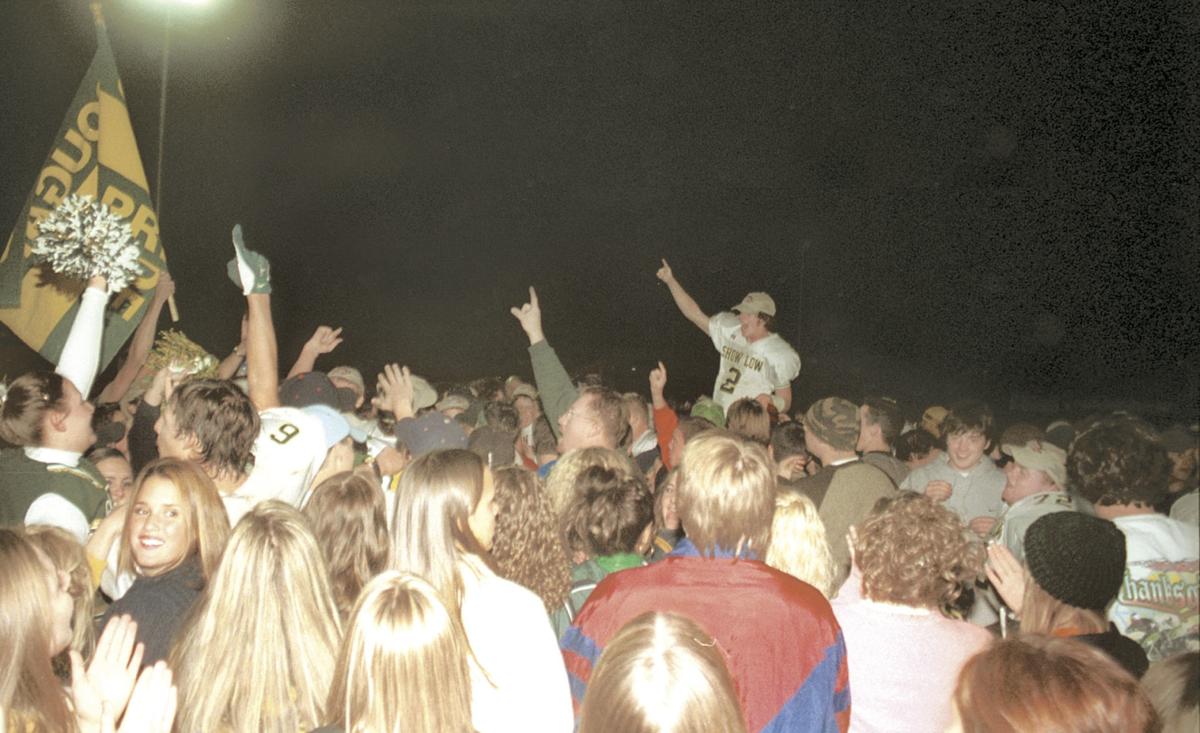 Show Low quarterback David Gentry, riding the shoulders of his teammates, shows the fans that the Cougars are No. 1. Gentry was named Most Valuable Player of the 2003 title game. 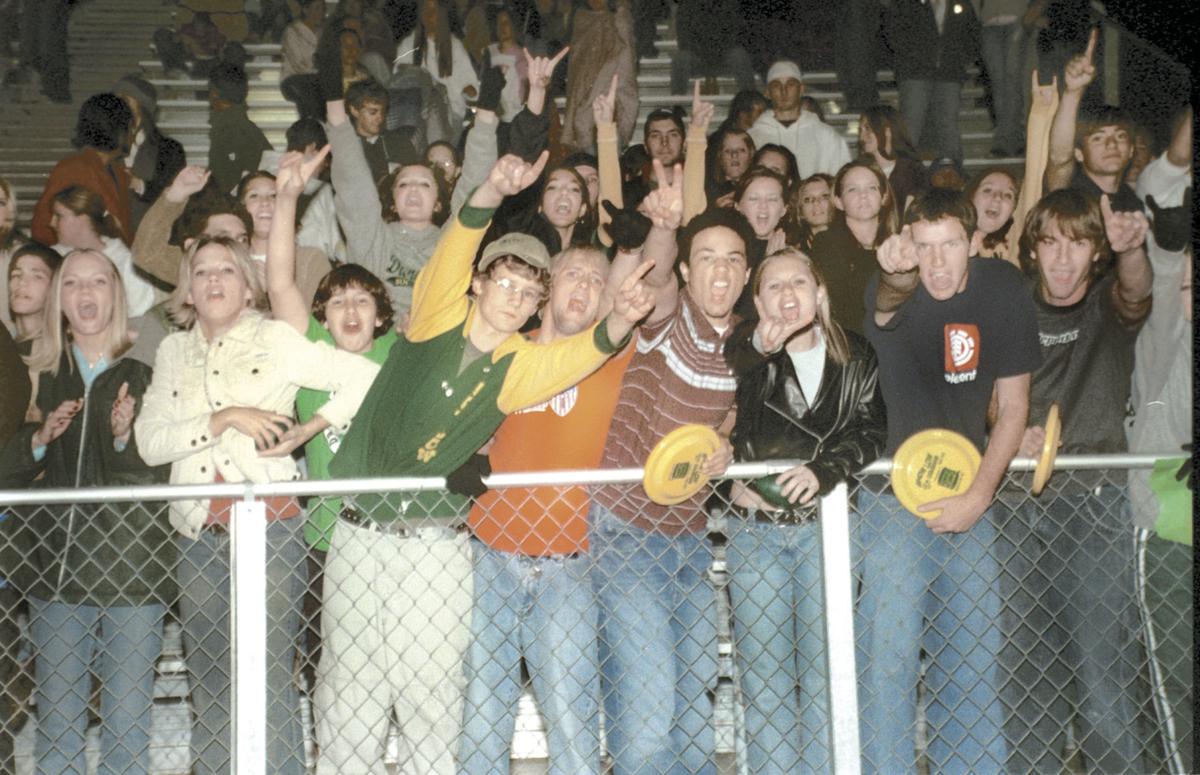 The Show Low High School student section gets worked into a frenzy during a fourth-quarter surge that clinched the 2003 state championship for their beloved Cougars. When the final horn sounded, Show Low fans poured onto the field in one of the liveliest championship celebrations seen in years. 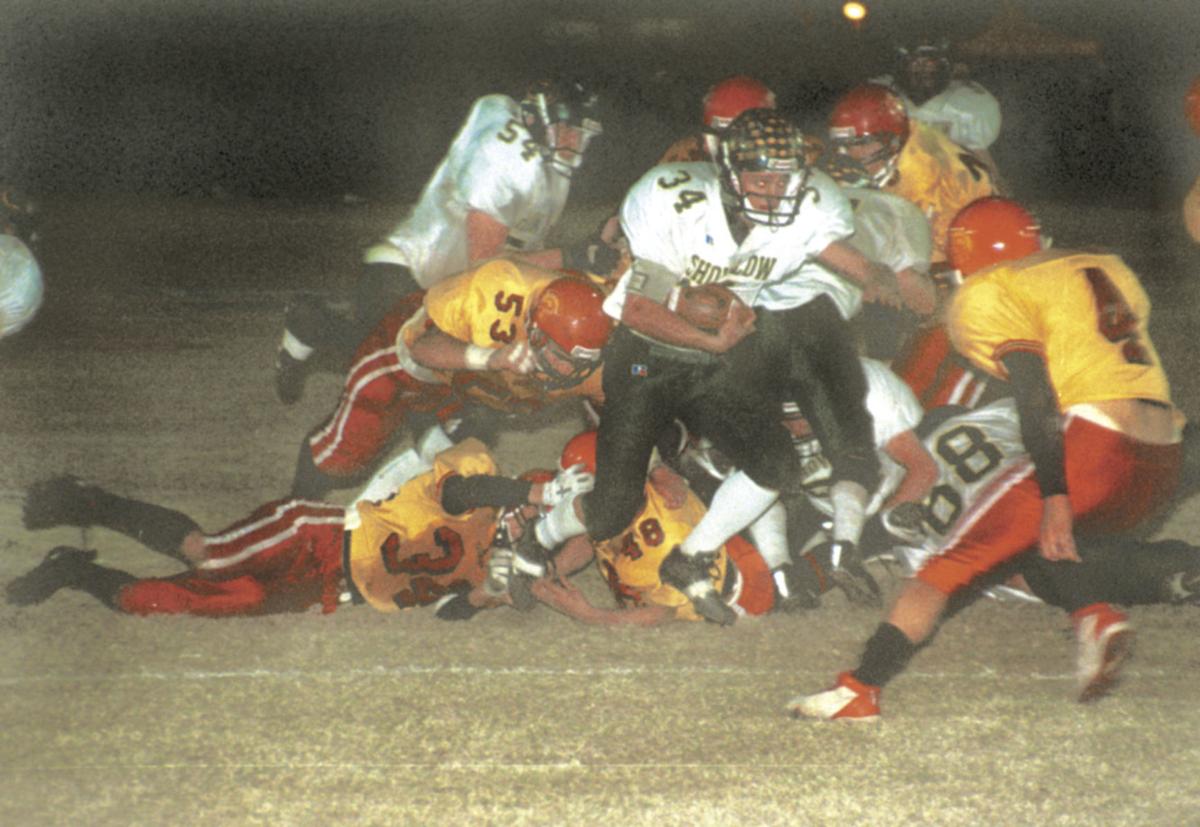 Show Low running back Trale Permar leaves a trail of blockers and would-be Seton tacklers in his wake on this 13-yard touchdown run that clinched a 35-14 victory, an undefeated season and the state title for the Cougars. 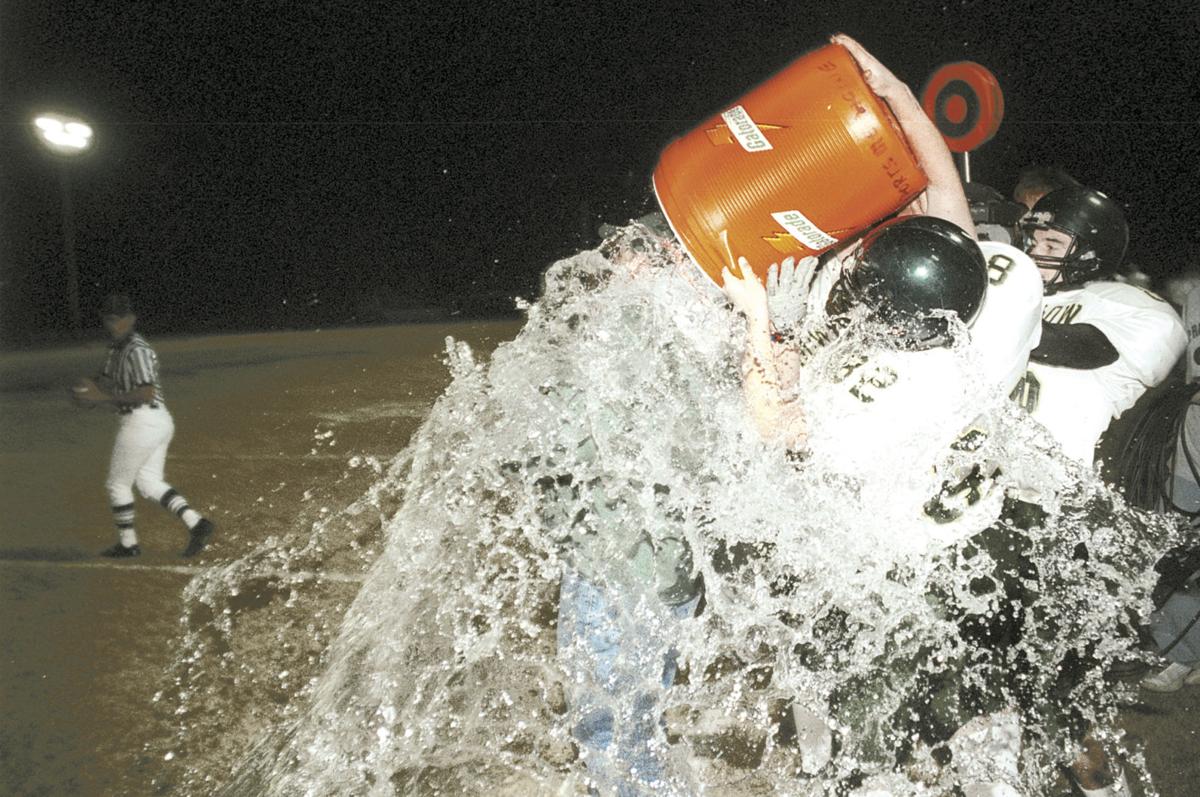 Show Low Head Football Coach Jeremy Hathcock is completely obliterated by an ice-water dousing from his players following the Cougars’ win in the 2003 3A state championship game. 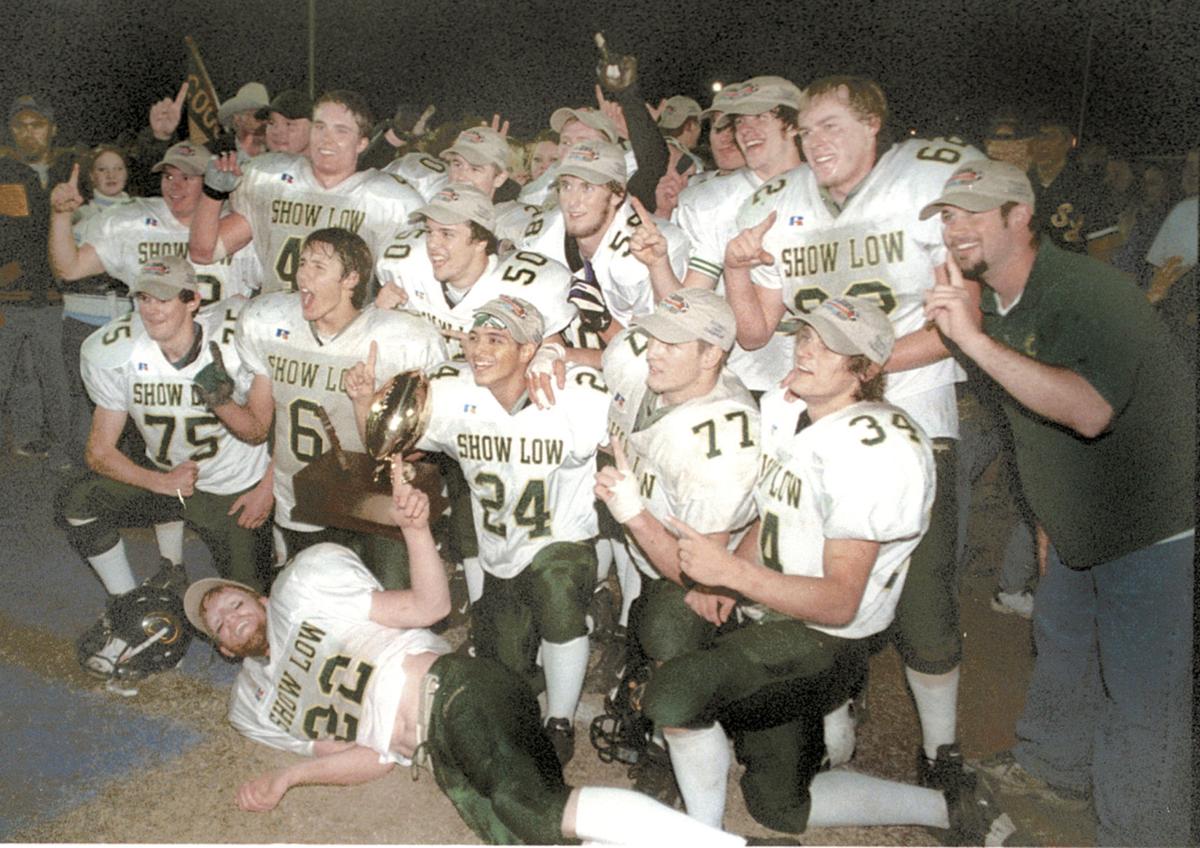 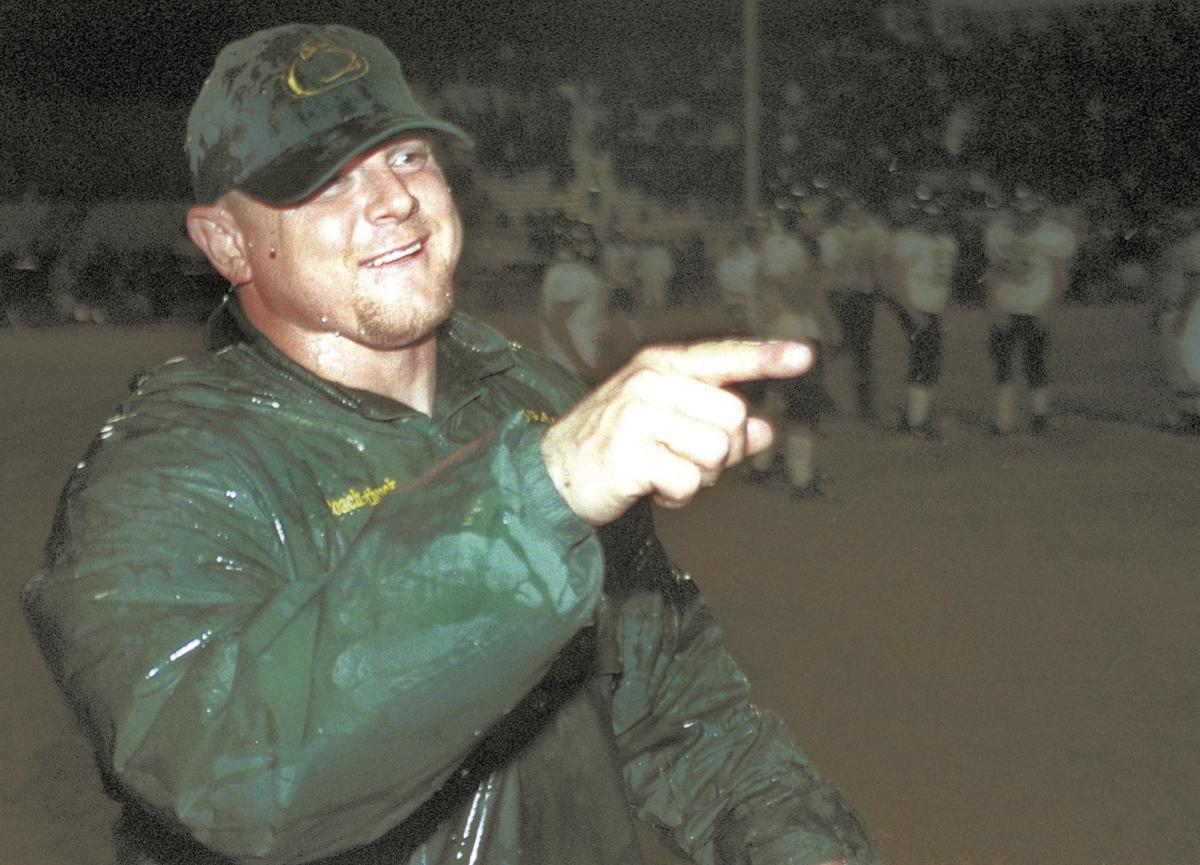 Show Low head coach Jeremy Hathcock points to his players after getting doused with ice water at the close of the 2003 state title game.

Show Low quarterback David Gentry, riding the shoulders of his teammates, shows the fans that the Cougars are No. 1. Gentry was named Most Valuable Player of the 2003 title game.

The Show Low High School student section gets worked into a frenzy during a fourth-quarter surge that clinched the 2003 state championship for their beloved Cougars. When the final horn sounded, Show Low fans poured onto the field in one of the liveliest championship celebrations seen in years.

Show Low running back Trale Permar leaves a trail of blockers and would-be Seton tacklers in his wake on this 13-yard touchdown run that clinched a 35-14 victory, an undefeated season and the state title for the Cougars.

Show Low Head Football Coach Jeremy Hathcock is completely obliterated by an ice-water dousing from his players following the Cougars’ win in the 2003 3A state championship game.

Show Low head coach Jeremy Hathcock points to his players after getting doused with ice water at the close of the 2003 state title game.

The Cougars were among a strong contingent in the 2003 playoffs. Chandler Seton Catholic entered the post-season as the top seed. No. 2 Winslow, No. 3 Show Low, No. 5 Snowflake and No. 7 Blue Ridge represented the East Region.

Blue Ridge belted No. 10 Wickenburg 42-14 in the first round before falling to Winslow, 13-6, in the quarterfinals.

Snowflake cruised to the semifinals with a first-round win against Keams Canyon Hopi (55-8) and against No. 4 Coolidge (35-20) in the second round.

In the other semifinal on Nov. 21, the Cougars defeated Winslow 27-13 to earn a spot in a title game for the fourth time in school history.

Seton advanced to the title game with a 27-5 win against the Lobos, setting up a game that would be won in the trenches, pitting the Sentinels’ powerful line against the smaller but quicker Cougars.

Show Low was not about to let Seton have a chance at denying them an undefeated season and the 3A State Football Championship which was decided at McClintock High School’s Jim Lyons Stadium on Nov. 29, 2003.

Every time the Sentinels got back into the game, the Cougars had a quick answer in the form of a touchdown. Show Low’s 35-14 win was a testament to hard work and a blue-collar attitude in its coaches and players.

The Cougars’ season began not long after their 6-5 season in 2002, coach Hathcock’s first year at the helm.

The season began in earnest in mid-summer, when Hathcock conducted several days of speed training. Then it was off to a football camp before pre-season practice and games every week since the opener on Sept. 5.

All the hard work paid off in a 13-0 season that saw an undersized team shut down powerhouse offenses while leaving the opposing defenses behind with unmatched speed at almost every position.

In the 2003 title game, Show Low took the opening kickoff and marched right down the field in 11 plays to take the lead. Marc Rova capped the 68-yard drive with a 30-yard run for a touchdown. Brian Murphy kicked the point-after for a 7-0 lead.

Neither team could mount a scoring threat and the first half ended with Show Low up 7-0.

Seton took the second half kickoff and drove 78 yards in 14 plays, eating up more than six-and-a-half minutes of the game clock. Quarterback Matt Refner hit Dan Koestner on a 13-yard TD pass, then Refner, in position to hold for the extra-point kick, ran and threw to Eric Barkyoumb for the two-point conversion to put the Sentinels on top 8-7.

It was the first time all season the Cougars trailed in a game, and it would only last three minutes, 12 seconds.

The Cougars came back on the ensuing series and drove 65 yards in seven plays to retake the lead for good. Quarterback David Gentry hit Daniel Wortman on a seven-yard TD pass to cap the drive. The key play of the drive was a 33-yard completion from Gentry to Wortman to the Seton 15.

“We went with what was working,” said Wortman, a senior linebacker/receiver. “The pass was open. We took it, and then we ran it. We have 15 seniors on this team who wanted it all year.”

Gentry ran wide on the option for the two-point conversion to put the Sentinels down by seven, at 15-8.

“We hadn’t been behind all year,” Hathcock said. “It was like they woke up a sleeping giant. Talk about answering a score. That play was open all night,” he said of Gentry’s run for the two-point conversion.

“There were a few (Sentinels pulling) face masks, but we knew what we had to do. It was easy to score the first time,” said Stetson Tenney, junior tackle. “The whole rest of the first half we pretty much stunk it up. When they scored to go up, it kind of lit a fire under us.”

Seton took the ensuing kickoff and lost the ball on a fumble three plays later. Wortman recovered to give Show Low the ball at the Seton 44.

The Cougars scored nine plays later when Trennon Judd went over the pile on a one-yard TD run. Murphy’s PAT made it a 22-8 lead with 9:10 left.

The Sentinels were forced to punt on the next series, but they got a break when the punt was muffed and Barkyoumb recovered at the Cougars’ 15. Four plays later, Koestner scored on a one-yard run. The extra-point kick sailed wide right, leaving the score 22-14 with 6:56 left.

After Rova returned the ensuing kickoff 20 yards, Gentry hit Wortman with a pass good for 71 yards and a TD. The PAT attempt was blocked, but the Cougars had secured a 28-14 lead with 6:29 to play.

Show Low’s Jason Covert then kicked and recovered an onside kick, and the Cougars ran some time off the clock and punted. Three plays later, after a sack of Refner and an incomplete pass, Trale Permar picked off a pass to give the Cougars the ball at the Sentinels’ 41. Five plays later, Permar ran 13 yards for a TD to ice the game. Murphy’s PAT made it 35-14.

“There were a lot of momentum changes in the first half,” said Permar, senior running back/defensive back. “The second half we got it into our heads that we were determined not to lose. We’ve been dreaming about this. We knew we had a coach that could do it. It’s awesome.”

The Cougars rushed for 187 yards and passed for another 161 — a total of 348 yards of total offense. The Show Low defense held the Sentinels, who were on a 10-game winning streak, to 113 yards rushing and 242 total yards.

“This game was more won in the trenches,” said Jason Covert, senior defensive end/offensive tackle. “Our defensive line just anticipated the center, and got off the ball faster. We weren’t going to be denied. We’ve worked too hard for it.

“It is the greatest feeling, being a senior. My last year in high school football being 13-0, you couldn’t ask for anything better,” Covert said.

Permar led the Cougars in rushing with a game-high 108 yards on 22 carries. Rova had 52 yards on seven carries. Gentry completed seven of 16 passes for 154 yards, two scores and no interceptions, and Wortman had five catches for 127 yards.

“We ran our base offense. We haven’t ran it in about four weeks,” Hathcock said after the game. “Everybody said (Seton) had the best short yardage defense (in 3A). I’ll put my lineup against them any day.”

“Our backs and receivers did a great job,” said Stephen Clark, senior defensive tackle/offensive guard. “We came to play football. It is outstanding that a team this small can outdo a team that averages 220 pounds. They say speed kills and apparently we had a lot of it.

“There was a lot of holding; a lot of face masks being pulled (by Sentinel players).They ripped my helmet right off my head right in front of a ref and it wasn’t called,” Clark said.

The Sentinels and the Phoenix-area media didn’t quite know what to make of the Cougars, whose motto this season was “Geeter Dun” — a line from comedian Larry, the Cable Guy, and a casually-dressed coaching staff in blue jeans.

While many teams’ coaches paraded around in coordinated outfits of the latest style, the Cougar staff preferred not to draw the attention to themselves — one of many reasons the players immediately bought into Hathcock’s system.

Hathcock, a record-setting running back at Blue Ridge from 1988-90, led Show Low to a 7-3 season in his third and final season in 2004. In 2006, he took over the head coaching duties at 6A Mesa Desert Ridge, where he led the Jaguars to 12 winning seasons, including 11 straight, and two title-game appearances in his 14 years there.