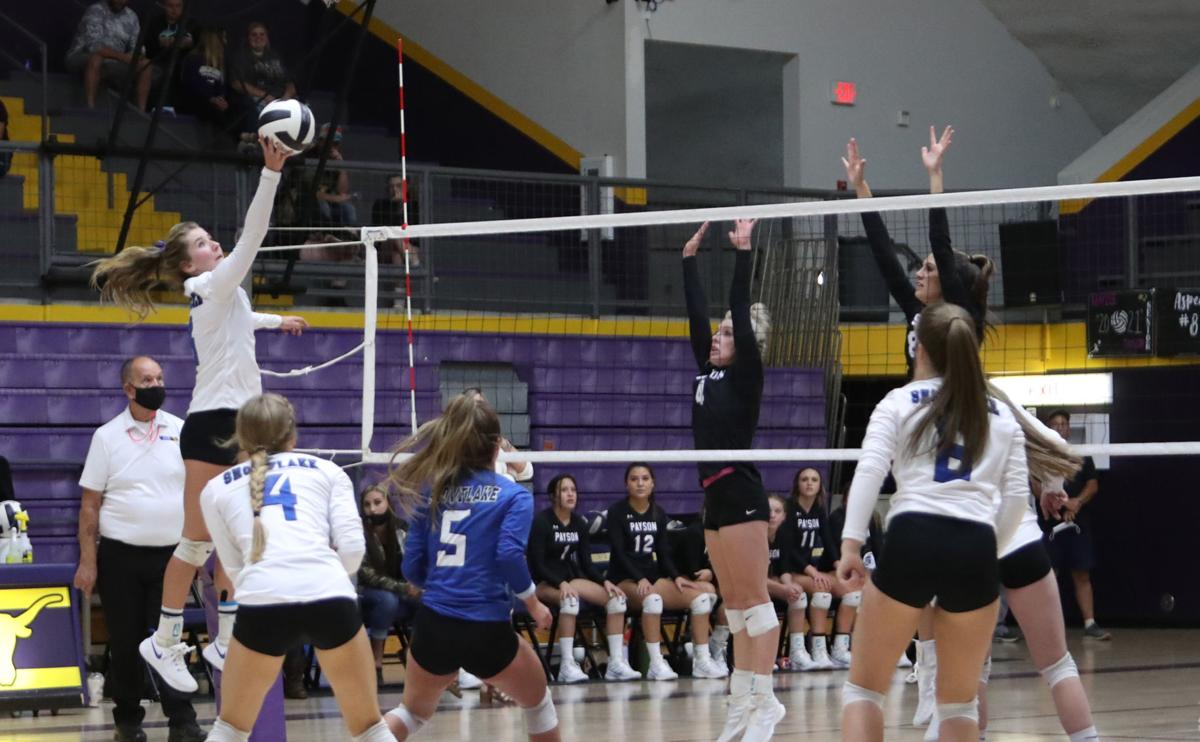 Snowflake’s Macee LeSueur pushes the ball over the net against Payson during a 3-0 win in October. The Lobos, the No. 2 seed in the 3A state tournament, will meet Payson once again in the first round at Tempe Marcos de Niza High School on Saturday, Nov. 14, at 1 p.m.

Snowflake’s Macee LeSueur pushes the ball over the net against Payson during a 3-0 win in October. The Lobos, the No. 2 seed in the 3A state tournament, will meet Payson once again in the first round at Tempe Marcos de Niza High School on Saturday, Nov. 14, at 1 p.m.

The 1A volleyball state tournament at Scottsdale Coronado High School begins on Friday, Nov. 13 with the first two rounds and concludes with the semifinals and finals on Saturday, Nov. 14.

Mogollon, the 1A Central region champion and No. 3 in last Saturday’s final rankings, will take on Salome in a first-round match at 1 p.m. on Friday. If the Mustangs win, they will face the Tucson Desert Christian-Scottsdale Cicero Prep winner Friday at 5.

No. 1 St. David and No. 2 Anthem Prep are the top two teams in the final 1A rankings.

The Snowflake High School varsity volleyball team won its last two matches of the regular season and secured an automatic berth in the 3A state tournament, which begins on Saturday at Tempe Marcos de Niza High School.

On Wednesday Nov. 5, Snowflake and Show Low volleyball teams faced off in Snowflake for the final 3A East region game of the season.

“They were recognized for their excellence on the court and in the classroom,” stated Lobo head coach Karen Hargrove.

Not only are the girls talented volleyball players, but they are also hard working students, with a combined GPA of 4.193.

On Thursday Nov. 6, the Lobos finished the regular season with a win over the fourth ranked Thatcher Eagles.

“Thatcher has a great program and we were excited to finish the season strong with a good showing, winning in three games,” said the coach.

Play-in games were Tuesday, and the tournament brackets were to be posted on Wednesday. The 3A State Tournament will be held at Marcos de Niza, in Tempe on the next two Saturdays, Nov. 14, and Nov. 21.

3A, 2A play-in winners advance to state tournament

Blue Ridge defeated visiting Winslow 3-2 in a Division 3A play-in match on Tuesday, Nov. 10, to secure a berth in the state tournament, which begins on Saturday at Tempe Marcos de Niza High.

In 2A volleyball, Tuesday’s play-in games were all won 3-0 by higher, home seeds, except for two 3-2 matches, as No. 18 Tucson St. Augustine knocked off Gilbert San Tan Charter and No. 23 Phoenix Christian upset No. 10 Morenci.