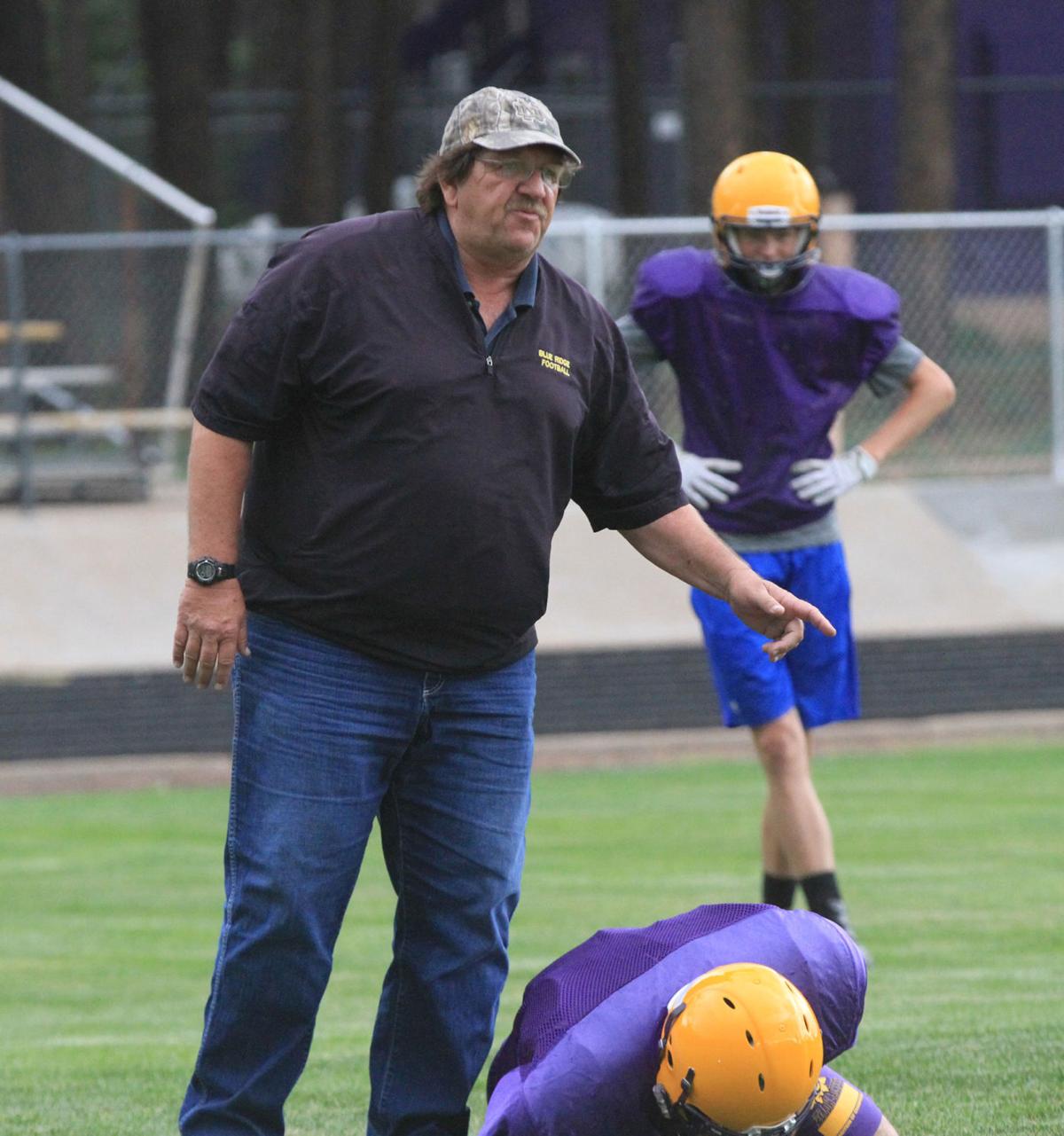 Blue Ridge head football coach Bob London oversees a pre-season practice in 2019. He is taking steps to minimize the risk of spreading coronavirus during workouts and games. 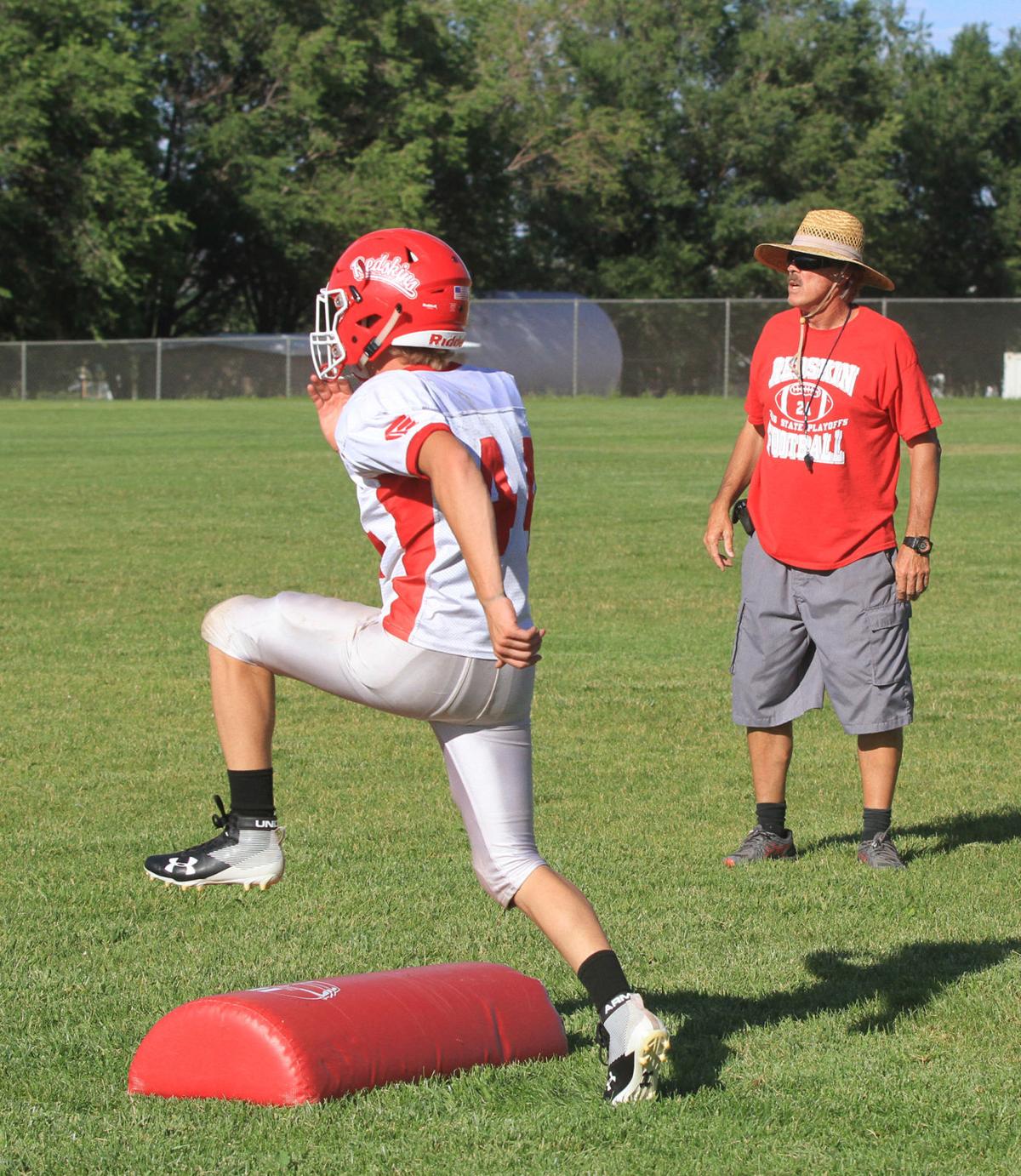 Blue Ridge head football coach Bob London oversees a pre-season practice in 2019. He is taking steps to minimize the risk of spreading coronavirus during workouts and games.

WHITE MOUNTAINS — Two area high school football coaches are taking the threat of COVID-19 seriously as they prepare for school reopening and possible restart of sports in the coming weeks.

The coronavirus pandemic cut short the spring sports season in March and schools in the state have been constantly re-evaluating the situation to determine how to reopen for the fall semester.

Gov. Doug Ducey lifted a stay-at-home order in late spring and Arizona saw a spike in cases during June and July. But in the last couple of weeks, the numbers, especially in hard-hit Apache and Navajo counties, have looked more promising.

Ducey delayed the start of in-person classes until at least Aug. 17, but has now left the decision to reopen to local school boards. The state is expected to release guidelines for safely reopening schools on Aug. 7.

The Arizona Interscholastic Association followed the governor’s lead by delaying the start of on-campus athletics and activities until Aug. 17, but the AIA is surveying member schools to develop a timetable.

Currently, all the state’s high school athletic programs are in summer mode until further notice. Athletes at Blue Ridge, St. Johns and other White Mountain schools are working alone or in small groups to try and stay in shape for the start of team practices.

“We are doing things in small groups. We’re getting 10 to 15 kids a day in the weight room.” said St. Johns head football coach Mike Morgan, who is tied with former Blue Ridge coach Paul Moro for the most career football coaching victories in state history. “We are running what the AIA calls our summer programs, We have basketball going on and they can play baseball. They are running on their own.

“We can start football practice on Aug. 17 (as it stands now). We’ll try to get the kids in in the next few weeks and throw the ball so kids can get back into shape,” Morgan said.

Blue Ridge High School plans to begin online learning on Aug. 10 and on-campus classes may not start until Oct. 5.

“We have opened the weight room to 10 people four times a day beginning at 6 in the morning,” said Blue Ridge head football coach and athletic director Bob London. “Each person has lifted with the same group of kids all summer. They have to wear masks and use the same racks. They are not wandering around.”

London and Morgan, two of Arizona’s most experienced coaches, are changing their procedures to halt the spread of the virus.

“We are going to do everything outdoors,” Morgan said of his pre-season practice. “And there is going to have to be social distancing. But everything is a go with us as long as school opens.”

“There are a lot of unanswered questions,” London said. “We’ve got to figure out how to maintain social distancing and travel to away games.

“We’ll minimize use of the locker rooms. Players will come from home dressed out. They will have to bring their own water and masks,” London said.

Normally, teams would be beginning practice about now, with games usually starting about three weeks from now.

“After we get the surveys back to the AIA, we have to re-calculate the start date, then eliminate the (schools) that have cancelled, and redo all of the schedules,” London said. “We’ll know more by the end of next week.”

St. Johns’ schedules will also change — with many region opponents having already canceled fall sports, the football team will move to a different region.

“The first varsity (football) game will be Sept. 11, if Aug. 17 stands as the first day of school,” London said. “My question is, are we going to have enough players and coaches to have a team? It’s weird.”

St. Johns, Holbrook move to 2A Salt region for football