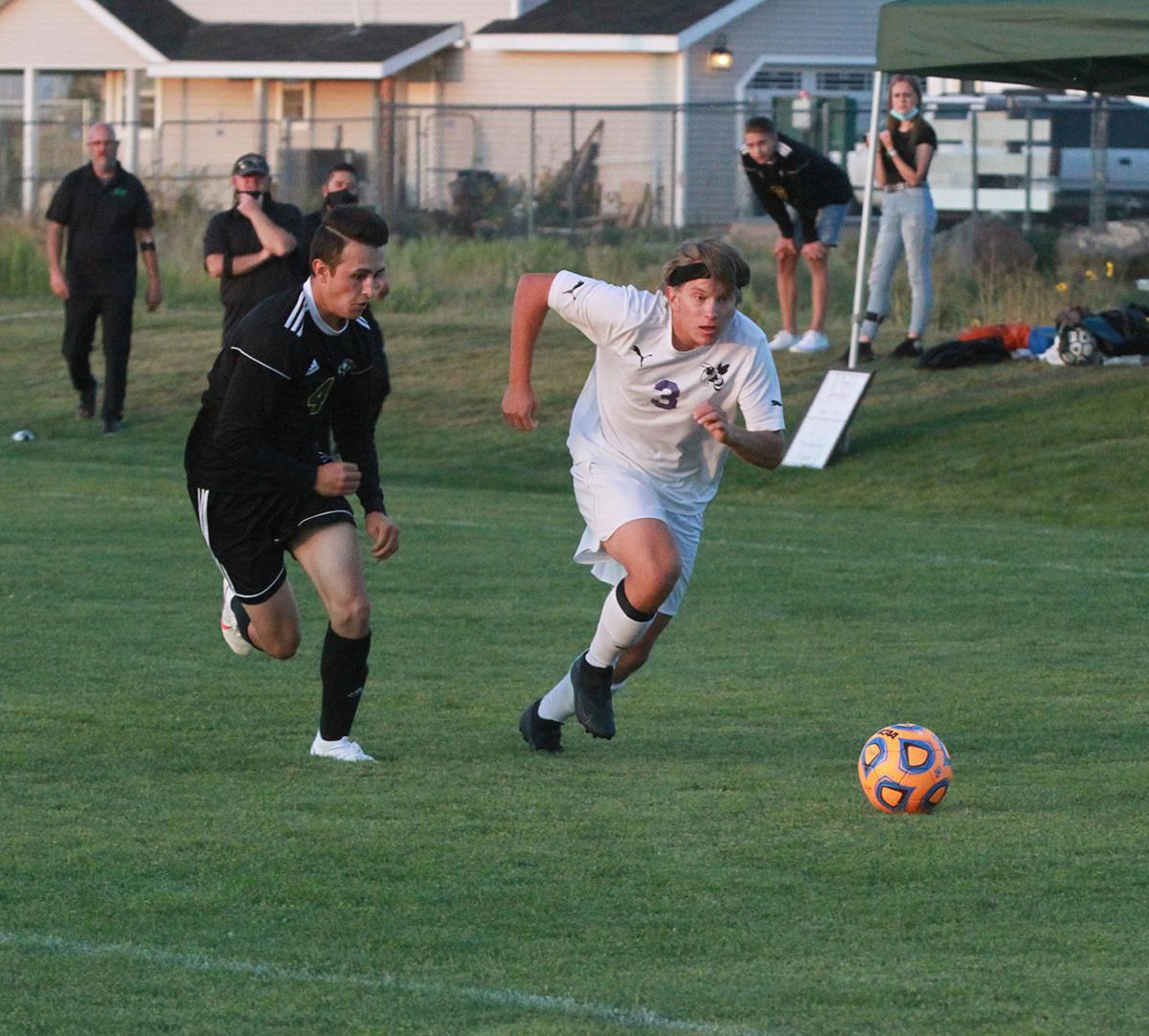 Show Low’s Kyle Blanchard (left) and Daniel Pansulla of Blue Ridge race for the ball during the Yellowjackets’ 2-0 win in the boys soccer season opener on Wednesday, Sept. 16.

Starters for the Blue Ridge boys varsity soccer team, along with game officials, stand for pregame ceremonies at the Yellowjackets’ season opener at Show Low on Sept. 16. Blue Ridge won the game 2-0. 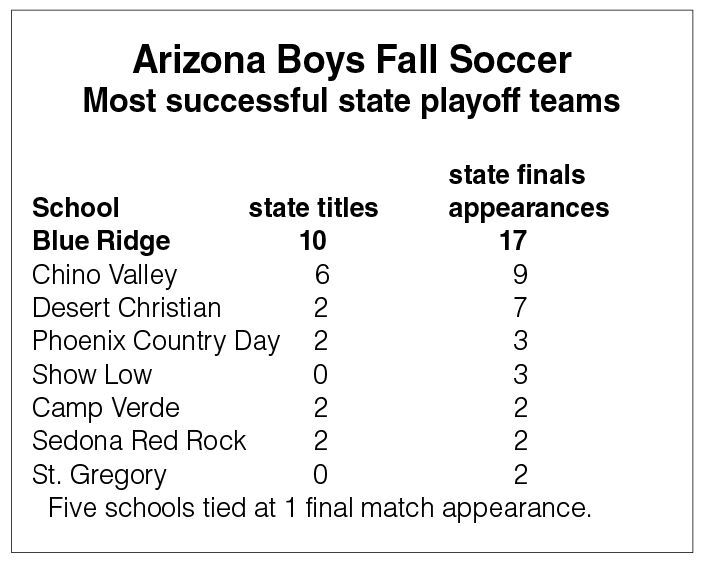 Show Low’s Kyle Blanchard (left) and Daniel Pansulla of Blue Ridge race for the ball during the Yellowjackets’ 2-0 win in the boys soccer season opener on Wednesday, Sept. 16.

Starters for the Blue Ridge boys varsity soccer team, along with game officials, stand for pregame ceremonies at the Yellowjackets’ season opener at Show Low on Sept. 16. Blue Ridge won the game 2-0.

LAKESIDE — As the winningest program in Arizona Boys Fall Soccer history, the Blue Ridge Yellowjackets normally reload with talent from year to year.

But with a new head coach, a new system, a key injury to a key player and setbacks due to COVID-19, this is no ordinary year.

This year Blue Ridge is coming off a 23-0 season in 2019 and the school’s 10th state boys soccer championship – more than any other school.

“A lot of things go into trying to defend a championship. We can get complacent at times,” Elkins said. “Anytime you are trying to win a championship, one of the biggest things to avoid is not getting complacent. I think we are running into that.

“I am taking over for a legendary coach (in Crain),” Elkins said. “I think he’s a legend, considering what he has done for this program. He is the reason I can be here. I appreciate (where I am). It is a huge challenge”

Several players have had to move to other positions out of necessity. There are several other changes this season.

“I am putting in a new system,” Elkins said. “The main changes are tactically and where we are putting players. When you are not playing games in the summer, experience changes everything. We weren’t able to scrimmage for going on four months. It messes with the team tactically. We are also changing trainings to be more social-distance friendly. That takes away a lot of training and drills.”

Blue Ridge has won its first four games with the players just beginning to adjust, which excites the new coach.

“This is an incredible team. I am excited to see where we are approaching the (state) playoffs,” he said.

I’m proud of my team, honestly. With all the things they have, they have been exceptional,” Elkins said. “They are bombarded with being online. School (in-person) is just getting back a couple of weeks. And the impact of not being in school socially.”

“We did have five seniors last year,” Elkins said. “That team last year was very sound technically and they were also very smart players. There are big shoes to fill. But this team recognizes that.”

Elkins says the team’s strength is its championship pedigree.

Returnees leading the way for Blue Ridge this season are senior Micheal Littleman, the 2019 All-Division 2A Offensive Player of the Year, and fellow all-state first-teamer Gustavo Cuiriz.

“Michael Littleman is my guy in midfield. He controls a lot of what we do,” Elkins said. “He’s an integral piece. along with Gustavo Cuiriz – he’s a heck of a player. He and Michael work well together and control everything.

“At center-defense and midfielder is Jackie Belnap. He is a vital part of what we do.

“Up front, we have Daniel Pansulla (a senior), one of our hardest workers who has a lot of speed, and our striker, Canyon Brosemann (senior), who comes from a soccer family,” Elkins said. “He’s a smart kid and he’s forcing the ball against the defenses.”

The coach said there is lots of talent on defense.

“Devin Fish (a senior), our left back, can make big runs playing offense,” Elkins said. “We have a sophomore anchoring everything in the middle of the defense, Brennan Jones. In my opinion, he can go for Defensive Player of the Year – he’s our stopper back there.

“Moving to center back, next to Brennan is Alberto Diaz, a junior. He’s a midfielder at heart but he is willing to switch to defense.

“Our starting keeper (senior Andy Plath) is out for the season. But we have another midfielder, Caesar Bonilla (a junior). He’s an all-state keeper as well. We have the luxury here at Blue Ridge to have him. He is willing to sacrifice his starting spot in the midfield for the team,” Elkins said.

Elkins was an assistant to Crain last year before taking over as head coach.

“My assistant now is Tyler Tsoukarlahkis,” Elkins said. “When I was a senior captain at Blue Ridge, he was a freshman on the varsity. Now we are in similar roles again. He’s our defensive guru. And we have Jerry Navarro, our junior varsity coach. He also helps with training the varsity too.”

The Yellowjackets haven’t really assessed their competition around the state, choosing at this point in the season to focus on what they need to do.

“I think there are probably some really good teams this year. We only know about certain teams,” Elkins said. “Everybody gives Blue Ridge their best game.

“We’re not focused on one team, just ourselves.”