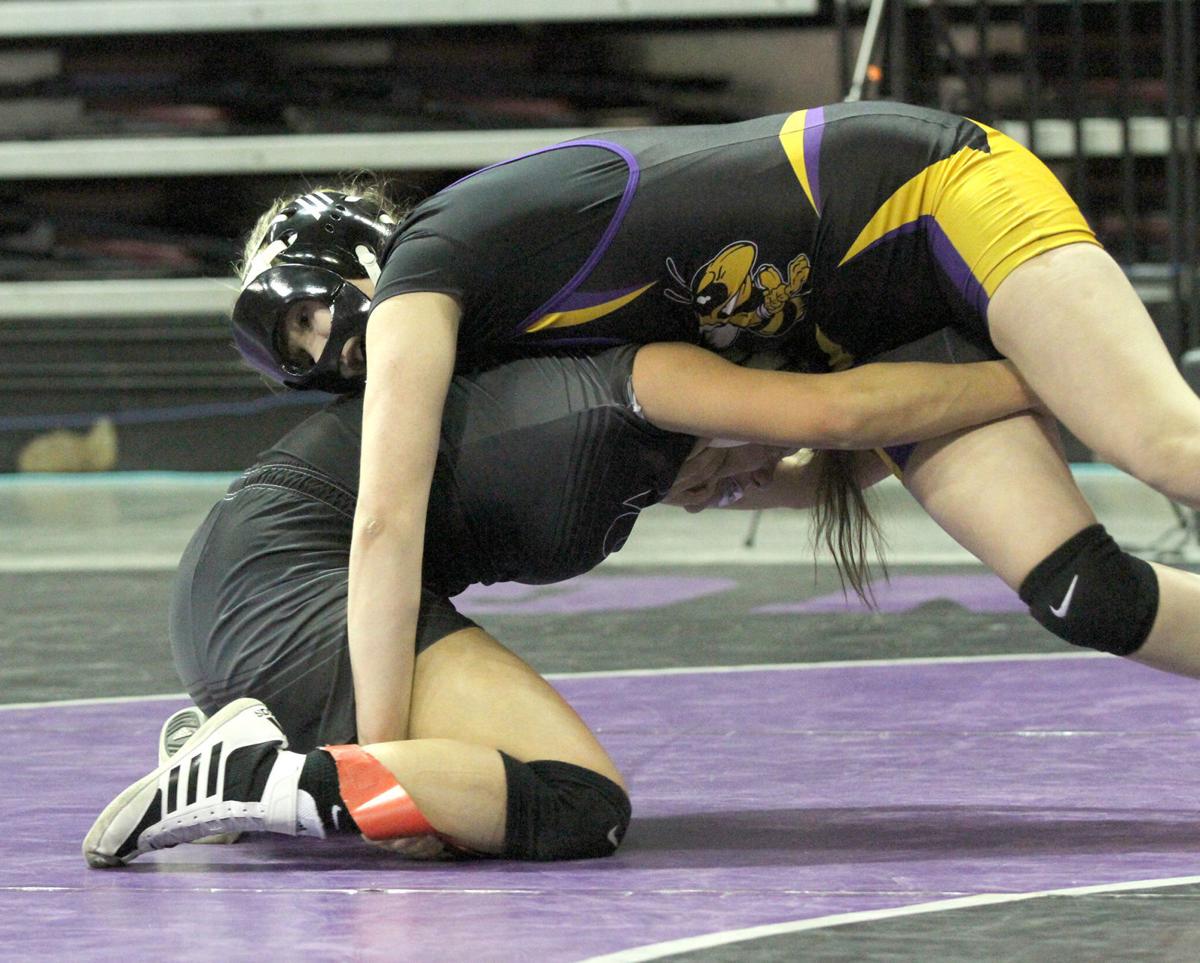 Blue Ridge senior Gretchen Knox tries to position her opponent, Ysela Gradillas-Flore of Marana Mountain View, for a pin during the fifth-place match at the Arizona Interscholastic Association’s Girls Wrestling Championships in Prescott Valley on Saturday, Feb. 15. Knox was unable to pin Gradillas-Flores but did win the match 2-1. 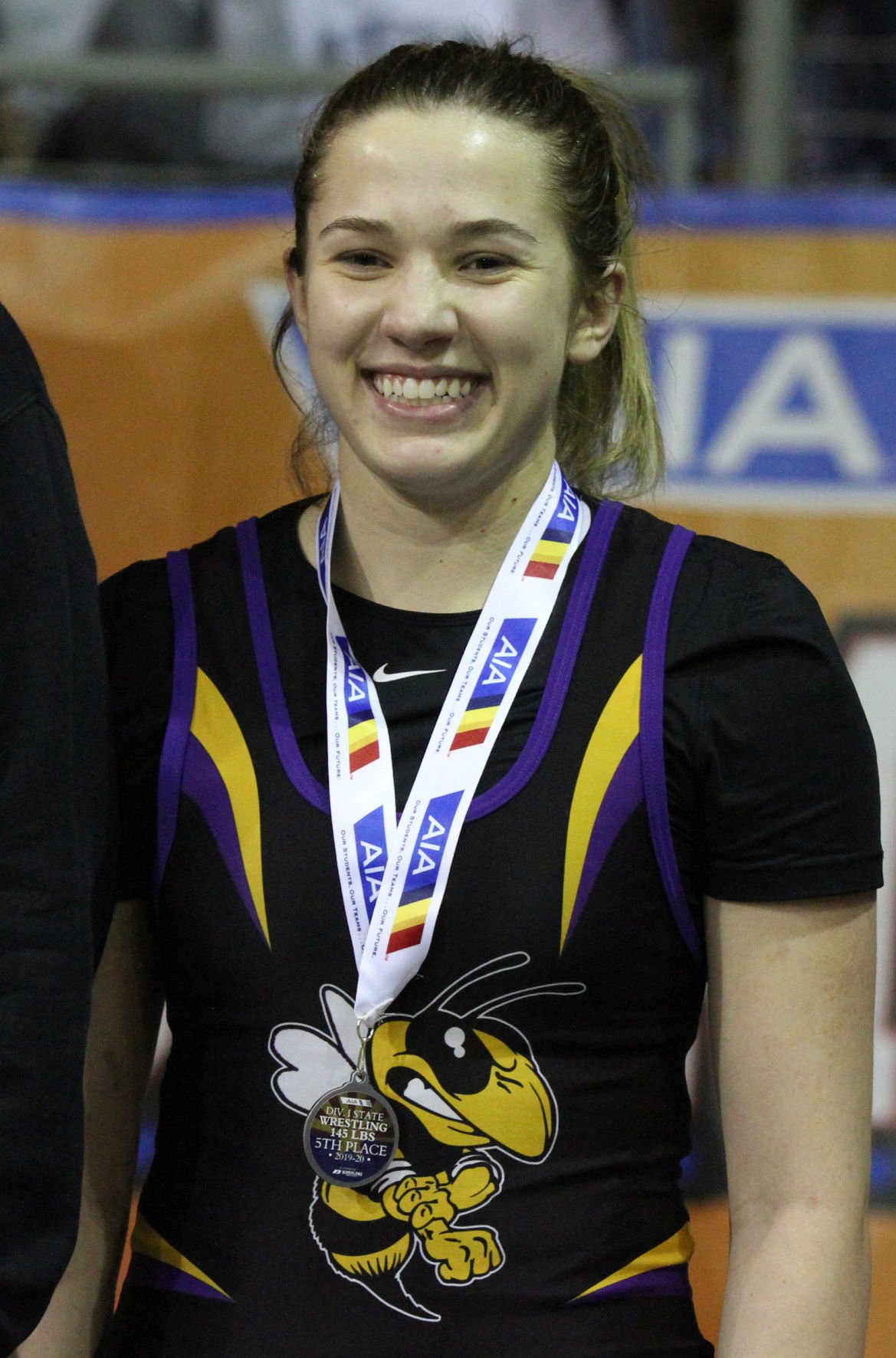 Gretchen Knox of Blue Ridge became the first female wrestler from the White Mountains to win a medal at the state tourament.

Blue Ridge senior Gretchen Knox tries to position her opponent, Ysela Gradillas-Flore of Marana Mountain View, for a pin during the fifth-place match at the Arizona Interscholastic Association’s Girls Wrestling Championships in Prescott Valley on Saturday, Feb. 15. Knox was unable to pin Gradillas-Flores but did win the match 2-1.

Gretchen Knox of Blue Ridge became the first female wrestler from the White Mountains to win a medal at the state tourament.

Blue Ridge senior Gretchen Knox is not one to back away from a challenge.

One year after the Arizona Interscholastic Association added girls wrestling to its winter sports slate, Knox decided to give it a try for the 2019-20 season.

And at last weekend’s AIA Girls Wrestling Championships in Prescott Valley, she made history as the White Mountain’s first female wrestler to win a medal in state competition.

“It was something new,” Knox said. “I was interested because of my background in martial arts. I got into it kind of on a whim.

“Girls wrestling is getting really big across the country. It’s great to be a part of it. It’s super mental and physical, it’s tough. It is easily the hardest sport I’ve ever done.”

It looked like the challenges may be too great during the season leading up to February’s sectional and state competition. Knox was only able to compete in a limited number of contests and she broke her nose in mid-January, but she kept right on competing with the aid of a face-guard.

The 145-pounder took third at both the Window Rock and Winslow Doc Wright tournaments, then finished second at her sectional qualifier to qualify for state.

“We had the biggest bracket (in all of Arizona) at my weight at our wrestling sectional,” Knox said. “They only take the top two to state (where 16 compete for the title).”

At the state tournament on Feb. 14-15, Knox advanced to the second round after the top seed had to forfeit on the first day. She won her second-round match with a 13-2 major decision over Arabelle Harrison of Shadow Ridge, and advanced to the semifinals.

Taliyah Armstrong of Mesa Westwood pinned Knox in the second period of the semifinal and went on to win the state title with a 6-2 decision over Ironwood’s Olivia Bauer.

“That (semifinal) match was close, but I got caught,” Knox said. “I beat myself — made a little mistake.”

The loss sent Knox into a playoff for third place in the double-elimination tournament. After getting pinned by Karstin Hollen of Mesa Mountain View, who went on to finish fourth, Knox finished the state tournament by wrestling for fifth place in the medal round on Saturday.

Knox defeated Ysela Gradillas-Flore of Marana Mountain View 2-1 for fifth place and she finishes the season with 18 wins and 7 losses.

My final match was close,” Knox said. “It was not the best I could have done. I didn’t want to give her a chance to shoot and get under my legs.

“It wasn’t a perfect ending. It’s only my first year. It was just a great experience overall.

Hopefully, I paved the way for other girls — other girls will be encouraged to try it,” Knox said.

With Knox being the only female wrestler in the area, she relied on the Blue Ridge boys team and Yellow Jacket coaches Travis Sorensen, Jeremiah Navarro and Andre Franco to get prepared.

Sorensen, the head coach, said he was honored to be able to coach Knox.

“I’m super-proud of her, she is so hard-working,” Sorensen said. “She’s as tough as nails because she can break her nose (the day before the Doc Wright tourney) and keep wrestling.”

Knox approached the season training five nights a week, mostly by weightlifting and some jogging. In addition to her other sports, she has been active in Tae Kwon Do and Ju Jitsu since fifth grade.

Knox is weighing many options after graduation. She ranks first in her class as an honor student with a 4.0 grade point average. She has been accepted by Northern Arizona University’s honors program and has submitted applications to several colleges, including the Air Force Academy. But she is unsure what field of study to pursue and is waiting on decisions from other colleges before making hers.