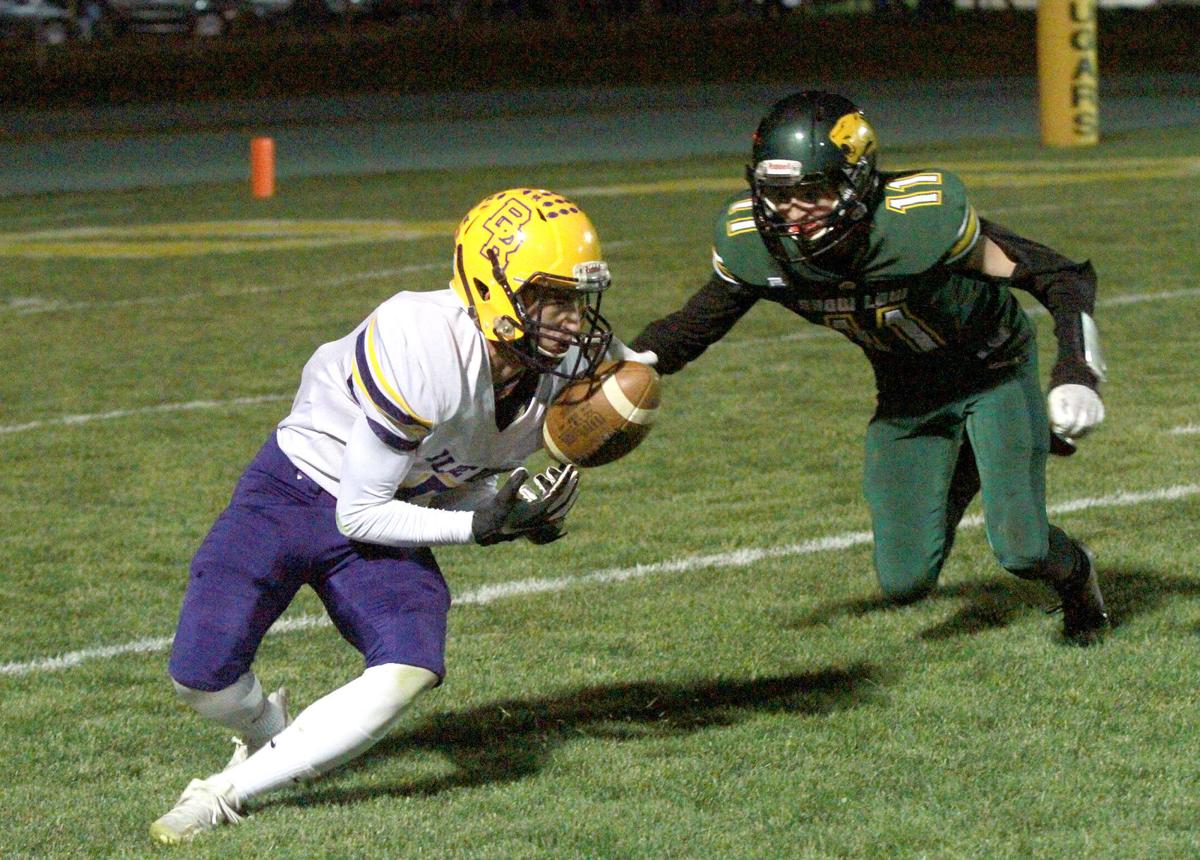 Jacob Kern of Blue Ridge prepares to haul in a pass for a 24-yard gain and a first down to set up the Yellowjackets’ third touchdown as Show Low’s Isaiah Halcomb defends late in the first half of a 28-14 win against the Cougars on Friday, Nov. 6. 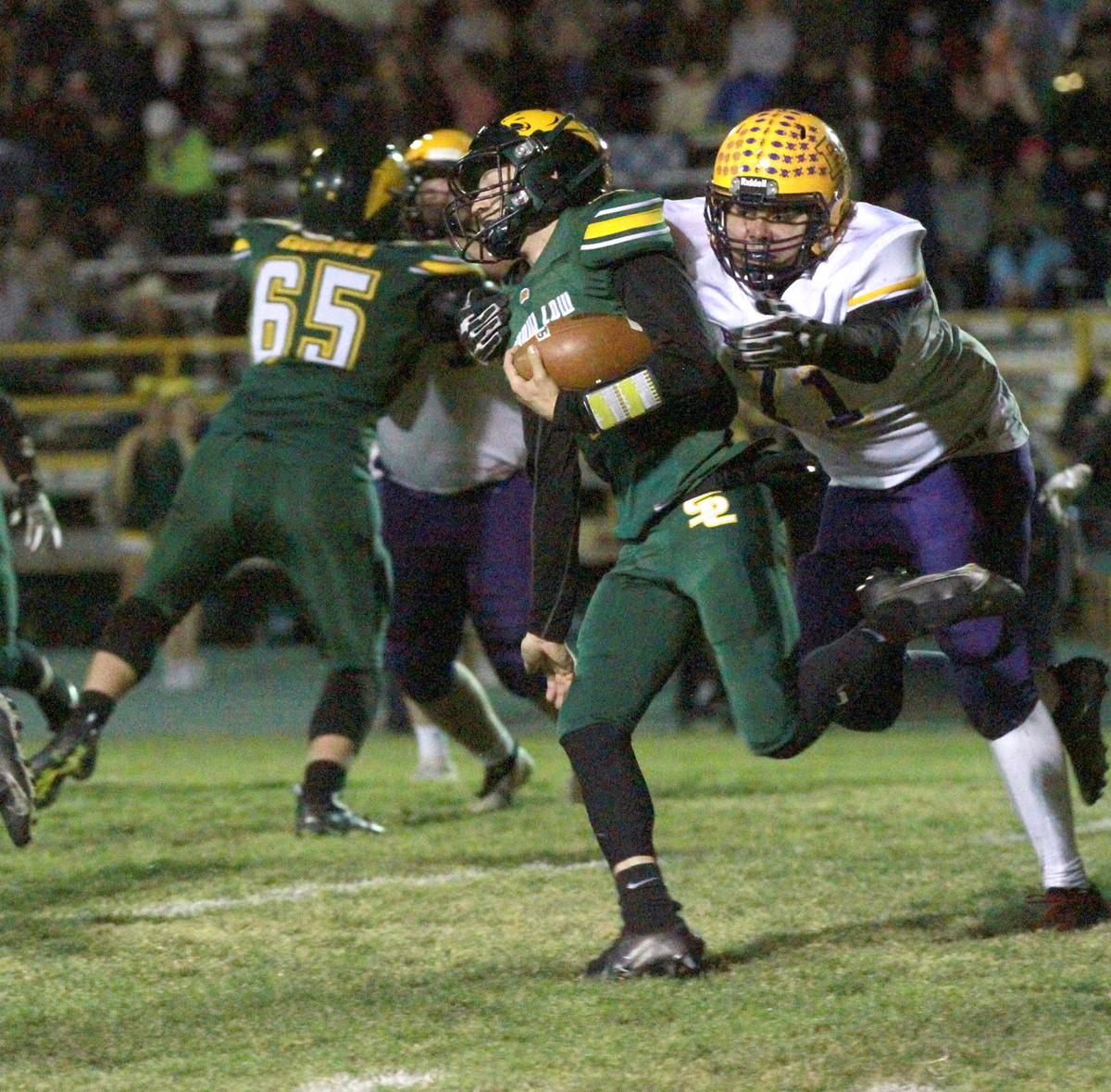 Blue Ridge defensive lineman Ronan Palmer reaches and wraps up Show Low quarterback Colton Yeager, holding him to a short gain during the first half of the Yellowjackets’ 28-14 win on Friday, Nov. 6.

Jacob Kern of Blue Ridge prepares to haul in a pass for a 24-yard gain and a first down to set up the Yellowjackets’ third touchdown as Show Low’s Isaiah Halcomb defends late in the first half of a 28-14 win against the Cougars on Friday, Nov. 6.

Blue Ridge defensive lineman Ronan Palmer reaches and wraps up Show Low quarterback Colton Yeager, holding him to a short gain during the first half of the Yellowjackets’ 28-14 win on Friday, Nov. 6.

Tonight is the night for the season’s second major battle for the 3A East football crown, as the Round Valley Elks come to Lakeside to take on Blue Ridge in a huge region tilt.

The Elks (5-1 overall, 3-0 in the East), ranked No. 3 in the Arizona Interscholastic Association’s initial rankings of the season on Tuesday, Nov. 10, can clinch the region title with a win tonight. If the No. 6 Jackets (4-1, 3-1) prevail, it will force a three-way tie for the East region championship.

The scenario was set up earlier this season when No. 2 Snowflake won 22-21 in Lakeside on Oct. 16, handing Blue Ridge its only loss this season.

The Elks defeated the visiting Lobos 37-29 two weeks later, on Oct. 30, and took the lead in the East standings. It was Snowflake’s only loss this season. Round Valley’s only loss came on Oct. 9, at No. 8 Safford.

Round Valley and Blue Ridge have occasionally faced off for the 3A East crown – most recently in the mid-2000s.

Some of those matchups did not live up to the billing, but this one promises to do just that.

The Elks, state champions in 2A a year ago, were moved up to 3A this year, along with perennial 2A powers Phoenix Christian and Thatcher. All three teams are right in the thick of the 3A playoff picture.

Round Valley has lots of athletes in both in the line and skill positions. The Elks have one of their best groups of defensive backs and receivers, led by speedy return specialist Jovan Ortiz, in many years.

Blue Ridge is led by senior quarterback P.J. London, a Division I prospect, as well as an experienced and well-schooled squad. London is not only a dual-threat signal caller but he is the team’s free safety, punter and placekicker all rolled into one player.

Both teams are solid with balanced offensive production so it should make for an exciting contest.

The top two teams, based on final standings, in each of 3A’s six regions receive an automatic berth in the state playoffs, leaving just four at-large berths in the 16-team tournament.

But there is a lot more on the line than just the matchup in Lakeside tonight.

And in Heber there will a Division 1A eight-man first-round playoff game as Mogollon (6-0) plays host to San Manuel (3-1).

All tonight’s games as set for 7 p.m. kickoffs.

State playoff pairings for 2A and 3A will be announced after this weekend’s games and round-of-16 play-in contests will be at the high seeds on Nov. 20.

Blue Ridge running back Damon Mitchell rushed for 157 yards and three TD’s and quarterback P.J. London threw for a touchdown to lead the Yellowjackets to a 28-14, 3A East region football win at cross-town rival Show Low on Nov. 6.

However it was Show Low that scored first, on the initial offensive series of the game. Sophomore Bryson Ryan capped the nine-play, 67-yard drive with a 15-yard run for a touchdown.

Blue Ridge came right back with a long drive but an interception by Cougar Isaiah Halcomb halted the scoring threat.

But after forcing a Show Low punt, the Jackets mounted a six-play, 70-yard drive to tie the game at 7-7, thanks to a 29-yard TD pass from London to Reece Esparza.

After forcing another Cougar punt, the Jackets mounted a 19-play, 90-yard scoring drive to take the lead for good. Mitchell capped the drive with a 3-yard TD run.

Blue Ridge recovered a fumble on the next Show Low series and went 40 yards in seven plays to push the lead to 14. Mitchell’s 2-yard TD dive with 55 seconds left in the first half capped the series.

Defenses held the offenses in check through the third quarter, and the Jackets were in Show Low territory early in the fourth quarter when Cougar Colton Yeager intercepted a pass and returned it 35 yards to the Blue Ridge half of the field. Ten plays later, Ryan ran 12 yards for his second TD of the game and to put Show Low back to within a touchdown. The point-after kick made it 21-14.

But Blue Ridge scored just three plays later to help secure the win when Mitchell took an option pitch from London and scored on a 44-yard TD run. and the Jackets went back up by 14 with 4:37 left in the game.

PHOENIX — It looked like the Snowflake football team would be idle last week after cancellation of its scheduled game against Winslow, but the Lobos found another quality opponent to go against when, late last week, they scheduled a 3A game at Bourgade Catholic.

The Lobos took a 31-10 halftime lead on the way to a 45-17 victory, improving to 5-1 overall. Most of the six games have been against teams in contention for the 3A playoffs.

Senior Mayson McKinlay, who ran the ball four times for 95 yards, ran for a score and also had a four-yard TD catch. Junior Noah Baum had three catches for 107 yards and a TD; senior Caleb Lyman had three receptions for 102 yards and a score. Camden Brimhall had nine carries for 72 yards and a TD. Cantrell also ran for a score. Placekicker San Crockett was six-of-six kicking PAT’s and he also added a 42-yard field goal in the first quarter.