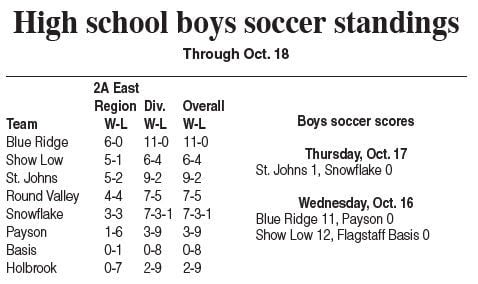 Only three regular-season matches remain in boys soccer for teams in the White Mountains. Six area teams have one game left before the state tournament which begins next week.

In another 2A East finale, No. 19 Holbrook plays host to No. 16 Payson at 6 o’clock on Wednesday.

In 2A Boys Fall Soccer, the top team in each region earns an automatic bid to the state tournament. Five additonal qualifiers will be chosen based on their overall ranking at the end of the regular season.

The eight-team bracket will be seeded according to each team’s overall ranking in the AIA’s final rankings. The tournament will be three rounds of single elimination.

First round matches (quarterfinals) will be held on Wednesday, Oct. 30, at the high seeds (subject to relocation).

Semifinals and finals will be on Nov. 1 and 2 at Gilbert Williams Field High School.