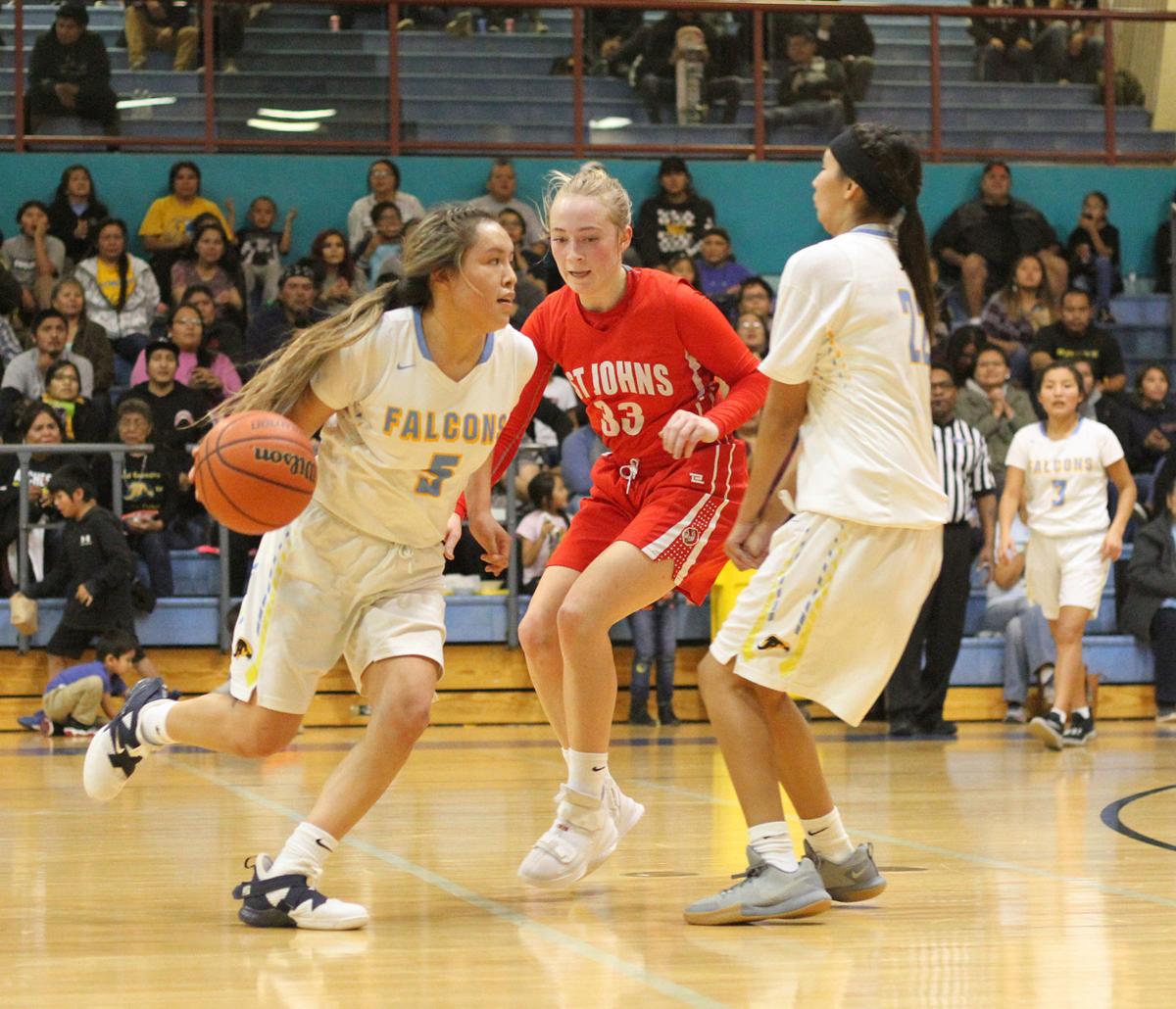 Trachelle Johnson of St. Johns fights through a pick set by Alchesay’s Brennae Butterfield as Falcon Shandell Suttle looks to pass or shoot during the Redskins’ 47-44 win on Thursday, Jan. 30. Johnson led St. Johns with 12 points in the victory while Suttle had 10 for Alchesay. The St. Johns girls, who lead the 2A North, have control of their destiny in the region race with three games — one a non-conference contest — this week. 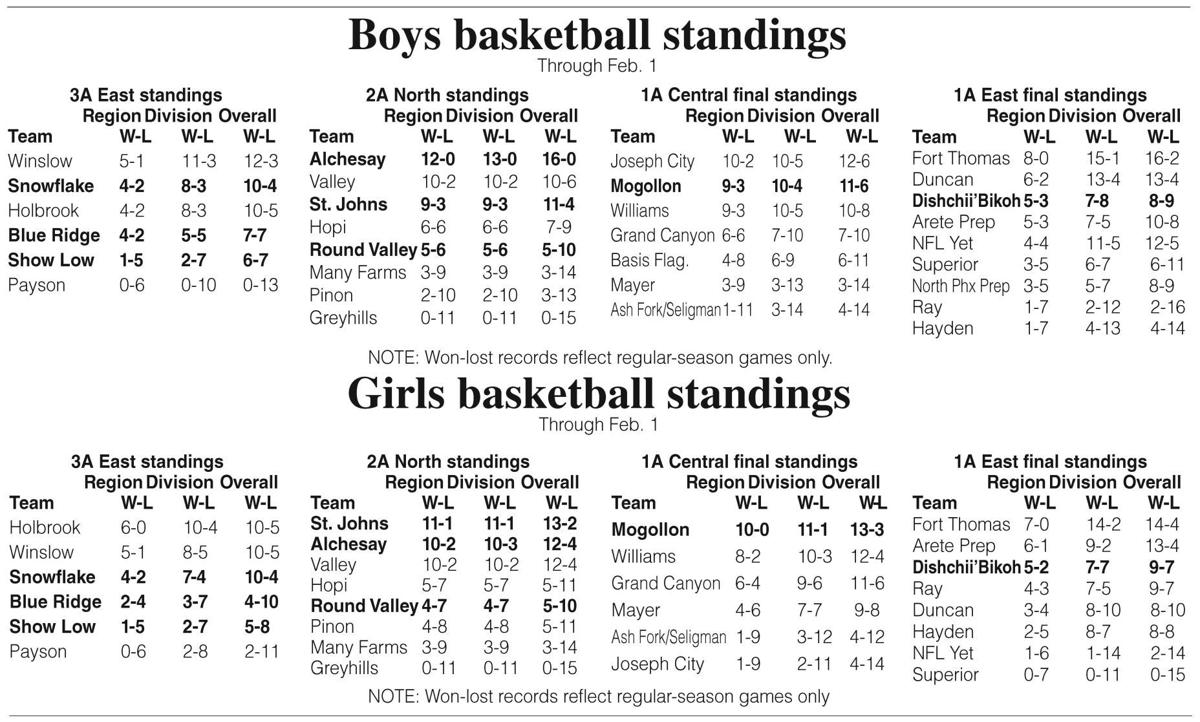 Trachelle Johnson of St. Johns fights through a pick set by Alchesay’s Brennae Butterfield as Falcon Shandell Suttle looks to pass or shoot during the Redskins’ 47-44 win on Thursday, Jan. 30. Johnson led St. Johns with 12 points in the victory while Suttle had 10 for Alchesay. The St. Johns girls, who lead the 2A North, have control of their destiny in the region race with three games — one a non-conference contest — this week.

The Mogollon girls defeated Mayer in their regular-season finale on Wednesday to finish 10-0 as the 1A Central region champions.

Mayer hosts the 1A Central Tournament on Wednesday-Friday, Feb. 5-7. If Mogollon wins the section tournament, the Mustangs and the sectional runner-up advance to the state playoffs.

The Dishchii’Bikoh girls finished third in a strong 1A East with a record of 6-4. Fort Thomas ()7-0) won the region title.

In the 1A East, both state-playoff berths will be determined in the sectional tournament, hosted by Fort Thomas on Feb. 4-7.

Each of the five regions in 1A will have two automatic bids to at least conference play-in games — the regular season champions, which are guaranteed the top-five seeds in the play-ins, and section tournament champs. Those 10 teams and six at-large teams, based on final ranking, will compete in play-in games, hosted by the higher seeds, on Friday, Feb. 14. The eight winners move on the to the eight-team 1A state tournament to be held in the Prescott area Thursday-Saturday, Feb. 20-22.

The St. Johns girls are set to enter the post-season on a positive note. The Redskins seized control of first in the 2A North with a win at Whiteriver Alchesay on Thursday, Jan. 30. The Falcons and Sanders Valley are one game behind.

St. Johns will host the 2A North Tournament on Feb. Wednesday-Saturday, Feb. 12-15.

The top two teams in each region earn a berth to at least a conference play-in game on Feb. 18. Teams ranked 1 through 8, along with the eight winners from the play-in tournament advance to the 16-team state tournament in the Prescott area on Feb. 21-22 and at the Veterans Memorial Coliseum in Phoenix on Feb. 28-29.

The St. Johns girls have three games left in the regular season, all this week. The Redskins host Round Valley on Tuesday and 3A Show Low on Thursday before going on the road to Many Farms on Saturday, Feb. 8, for the final game before playoffs begin.

The Alchesay girls travel to Sanders tonight for a big game to stay in the North region race, then they close the regular season at home in Whiteriver on Thursday as the Falcons host Hopi.

After tonight’s game at St. Johns, the Lady Elks travel to Tuba City on Thursday to take on Greyhills, then return home for the regular season finale against Pinon on Saturday.

Blue Ridge and Show Low travel to Heber Mogollon on Tuesday, Feb. 4, in what is a home game for the Cougars. After a non-conference game at St. Johns on Thursday, the Cougars host Payson on Saturday, Feb. 8 at Lakeside Blue Ridge High.

The top two teams from each of 3A seven regions will earn an automatic bid to the 24-team 3A state tournament, which begins with teams seeded 9 through 24 on Feb. 18 at the higher seeds. The state tournament will be seeded according to the overall ranking of the 24 teams.