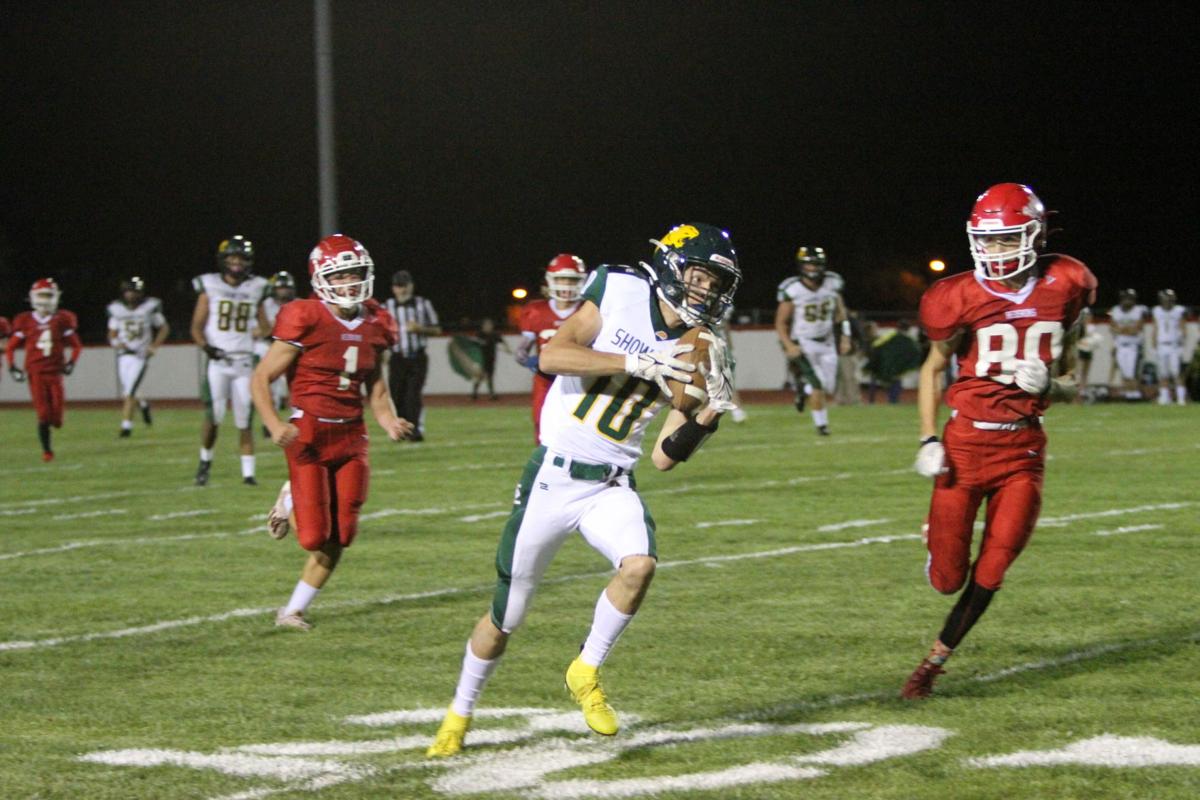 Above, St. Johns senior quarterback James Thomas hands off to senior running back Afton Cox as the Redskins’ offensive line works against the Cougars’ defensive line. Below, Show Low receiver Jeremy Kishbaugh hauls in a reception for 52 yards as James Thomas (1) and Wes Scarbrough defend the play early in the second quarter. 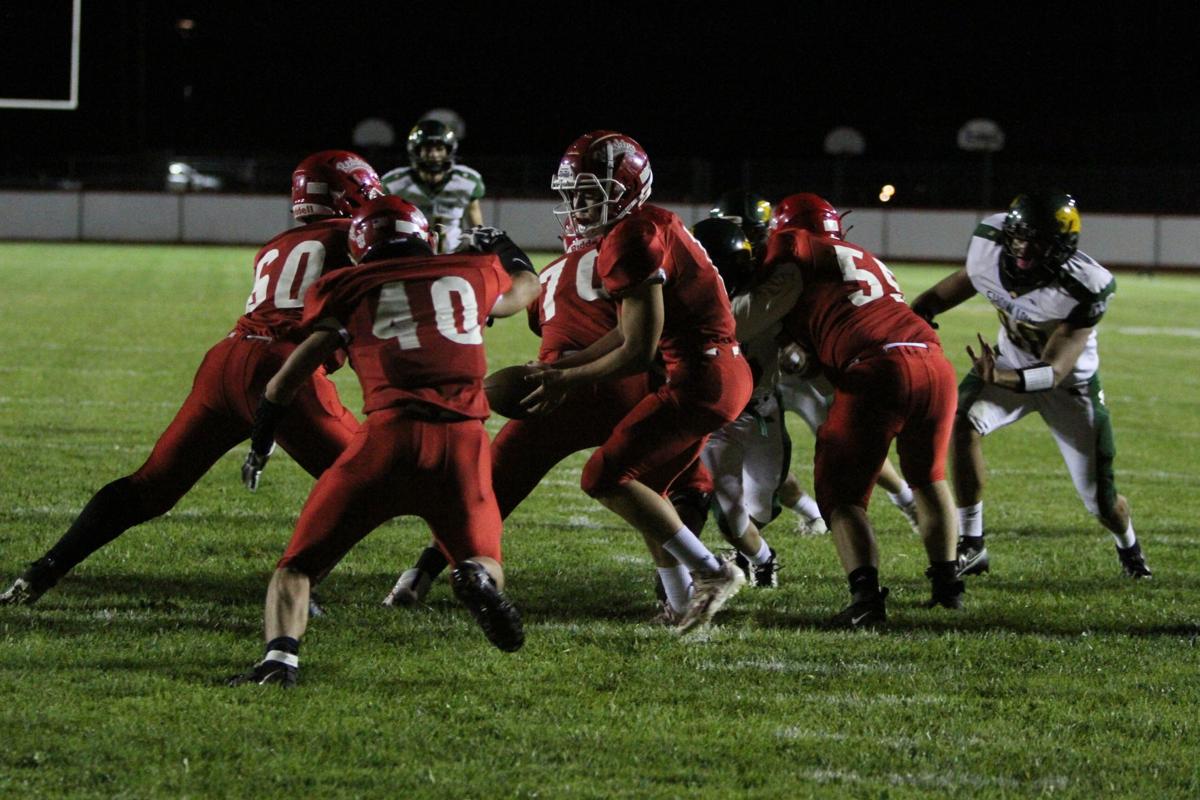 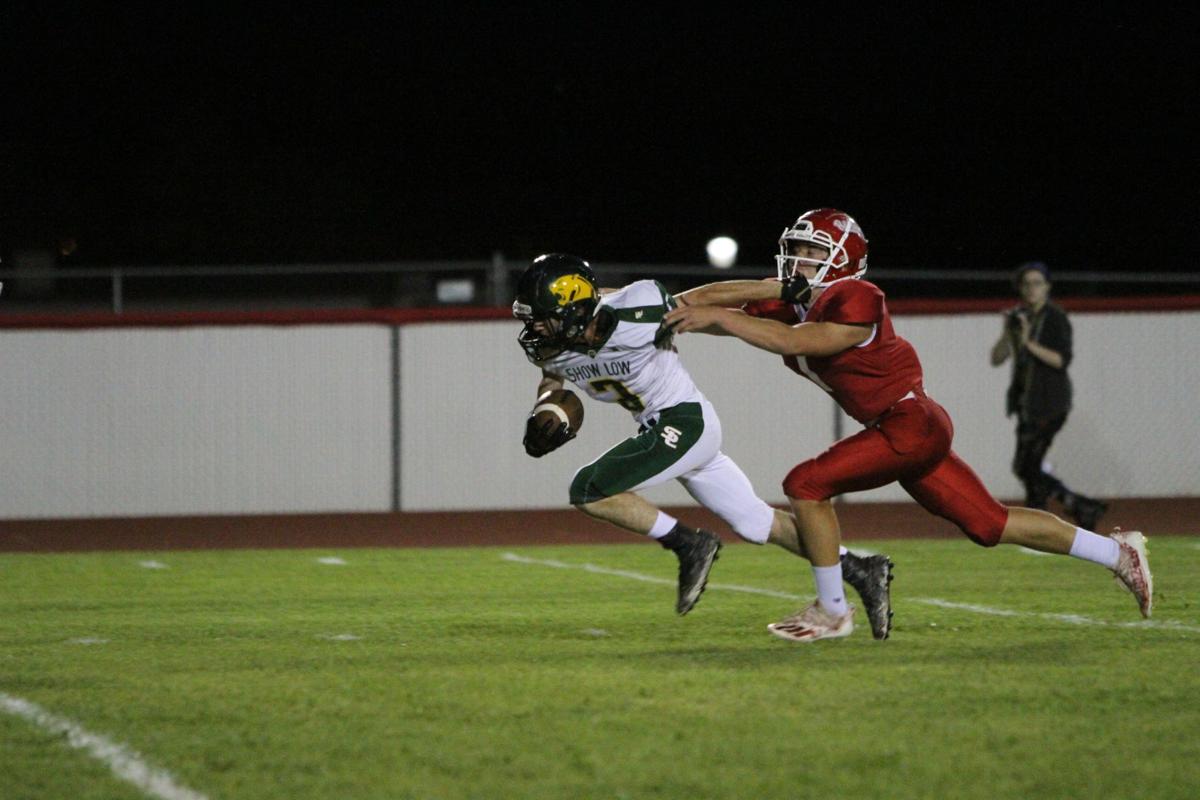 Show Low’s Layne Perkins runs a step ahead of a St. Johns defender trying for a tackle in Friday’s game in St. Johns. 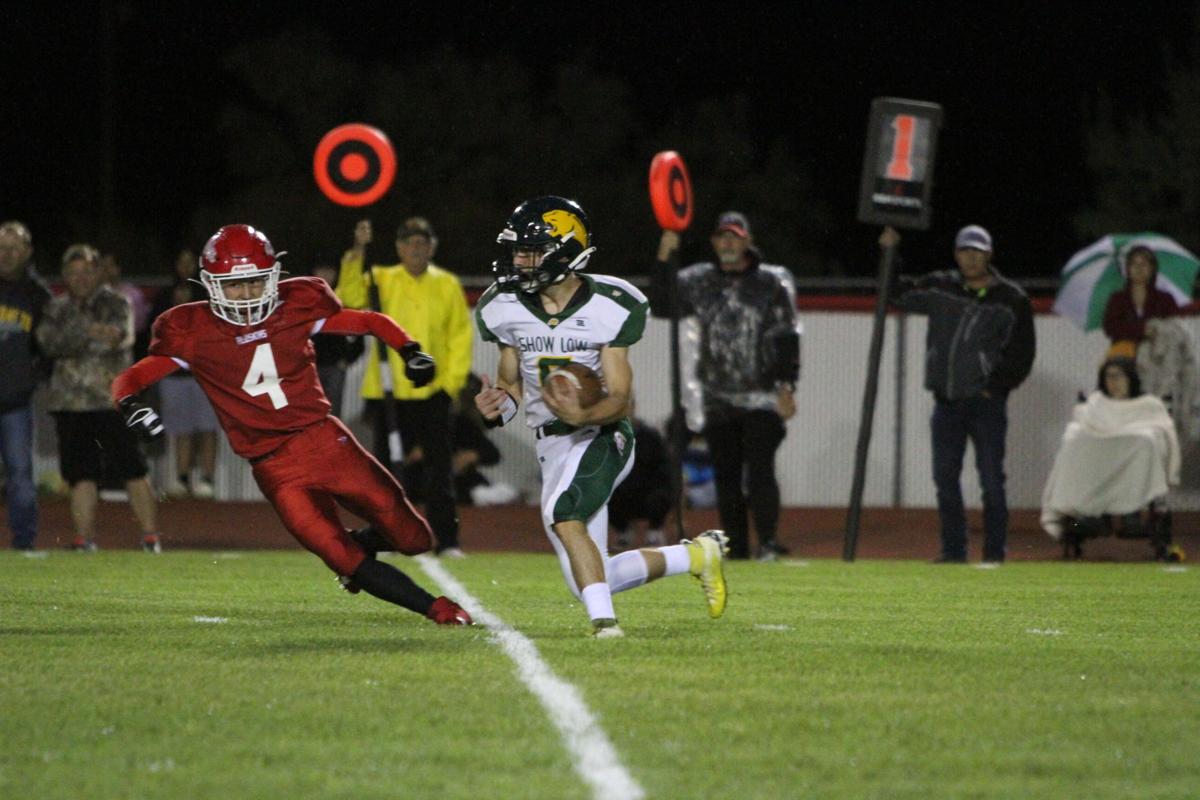 Above, St. Johns senior quarterback James Thomas hands off to senior running back Afton Cox as the Redskins’ offensive line works against the Cougars’ defensive line. Below, Show Low receiver Jeremy Kishbaugh hauls in a reception for 52 yards as James Thomas (1) and Wes Scarbrough defend the play early in the second quarter.

Show Low’s Layne Perkins runs a step ahead of a St. Johns defender trying for a tackle in Friday’s game in St. Johns.

In a season-opening game that was delayed until 7:58 p.m. and ended at 10:09, the Cougars’ senior quarterback bolted for 56 yards on the first play from scrimmage. That set up his own 10-yard touchdown run on the next play, and he added two other TD runs to lead Show Low past St. Johns 43-0.

On 2-point PATs, Yeager ran in a pair and threw for a third, kicked a 1-pointer to boot and intercepted a pass as a free safety.

After his first game on the sidelines for the Cougars, coach Carlo Hernandez deflected individual attention from Yeager and instead focused on the team as a unit.

“Everybody has to do their job,” Hernandez said. “I think all that hard work showed these guys that it takes all of us to be competitive. I thought we did well running the ball and in pass protection.”

On defense, the Cougars chased the Redskins’ James Thomas all over the field, sacked him at least twice and gave the senior quarterback fits in trying to find open receivers. Thomas also was intercepted twice.

After Show Low’s first score just over a minute into the game, St. Johns recovered an onsides kick at its 38-yard line. The Cougars forced Thomas to fumble on the Redskins’ first offensive play, and five plays later Yeager evaded a few tackles on the way to a 27-yard TD and a 16-0 Show Low lead at 9:55 of the first quarter.

Senior Bryson Ryan added 54- and 10-yard touchdown runs, and senior Ryan Kishbaugh had a 5-yarder to finish the Cougars’ scoring. Sophomore Nash Brewer took over at quarterback for Yeager at the start of the fourth quarter and directed a 37-yard scoring drive that capped the scoring at 10:21 of a non-stop clock.

The Redskins lost one other fumble, were intercepted twice, had two punts deflected and reached the red zone just once. Thomas did sparkle on a 47-yard run to begin the Redskins’ second drive, but that scoring threat was thwarted by Show Low right cornerback Carson Cooper who intercepted Thomas’ pass at the 3-yard line.

“We got beat every way you can get beat. We didn’t do anything right tonight. We didn’t block. We didn’t tackle. We didn’t look like a Redskin football team at all,” said Morgan who’s been on the end of 342 wins in his career, most for any high school coach in Arizona.

Morgan was most upset at his players’ effort toward the end of the game even with the result in no doubt.

“To say that St. Johns High School is one of the winningest football programs in the state of Arizona history was a joke tonight. We didn’t play like that at all. But, we will get better. We will improve. These kids they have no idea how hard they’re going to have to work. Our schedule’s going to be tough these next three or four weeks. Their backs aren’t very big and they ran through our arm tackles. We have a lot of work to do, but it starts with me. I got to get it out of the kids. This was an embarrassment tonight. They weren’t 43 points better than us. We let them be 43 points (better) because I thought our kids didn’t finish. They gave in to fatigue. They quit. And that’s something that Redskin football isn’t about. You never quit. That’s going to be the biggest thing we hit on Monday.”

In addition, Morgan was piqued with the Arizona Interscholastic Association and the early-season schedule that has the Redskins playing another 3A juggernaut in two weeks — Round Valley, which demolished Phoenix Christian 48-0 Friday.

“I, personally, don’t think it was a smart idea to open up with Show Low because it’s difficult to get the kids here in the summer. I’m not trying to make excuses. They’re a big school, totally outclassed us tonight. If we’d had a game or two under our belt I think we’d been a lot better off. That was my argument going in to this year. Somehow the AIA gave us Round Valley and Show Low in a three-week period to start the year. I can see playing 3A schools but few and far in between,” Morgan said.

It was actually Nash Brewer with the pick on the 3. Not Carson.