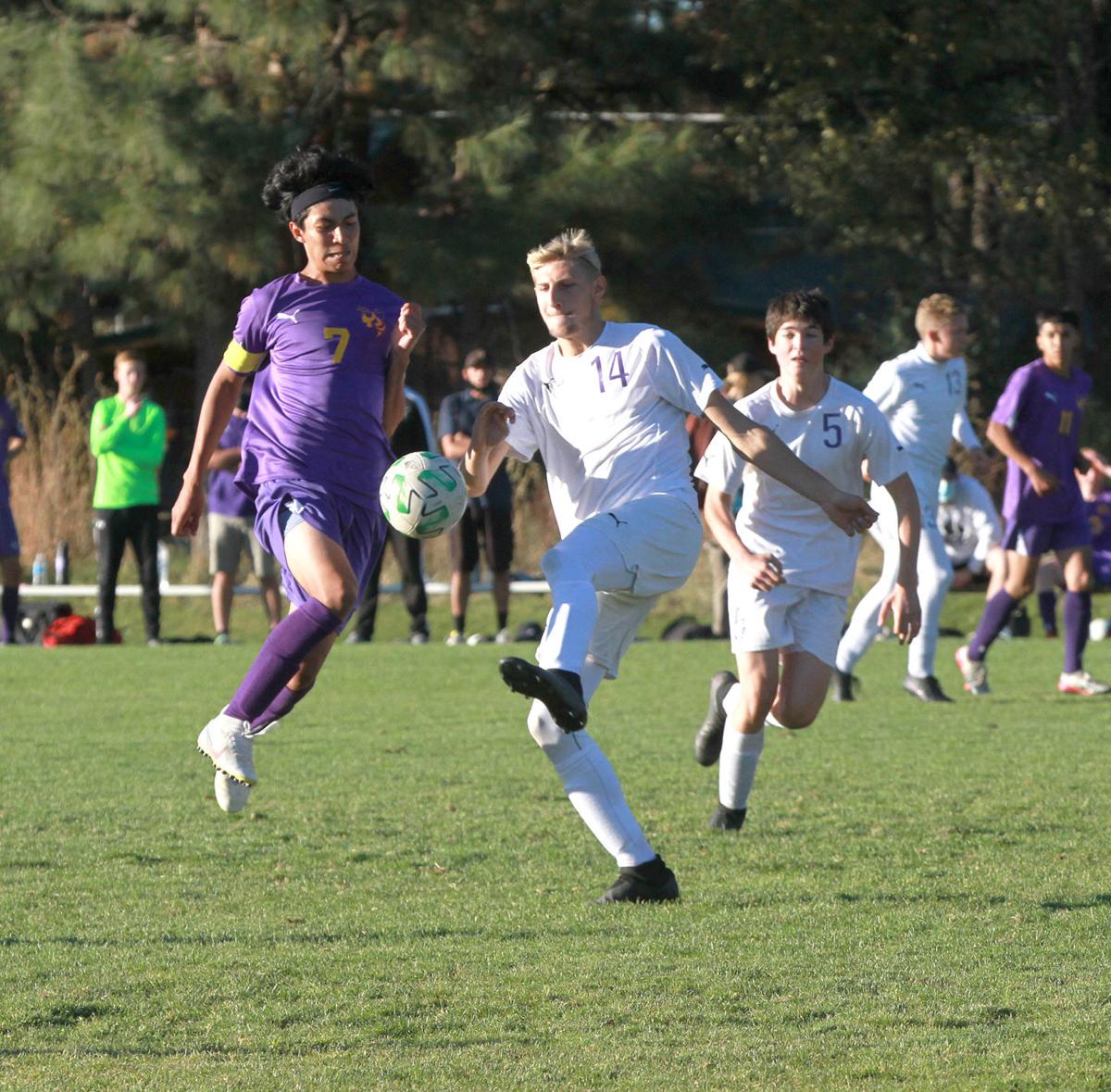 Blue Ridge senior striker Gustavo Cuiriz (7) and Payson senior Hunter Lee converge on the ball during the first half of the Yellowjackets’ 1-0 win in the first round of the state soccer tournament on Wednesday, Nov. 4. Blue Ridge went on to defeat Show Low, 2-0 in Friday’s semifinals and Chino Valley, 4-0, in Saturday’s final in Scottsdale to win the state championship. 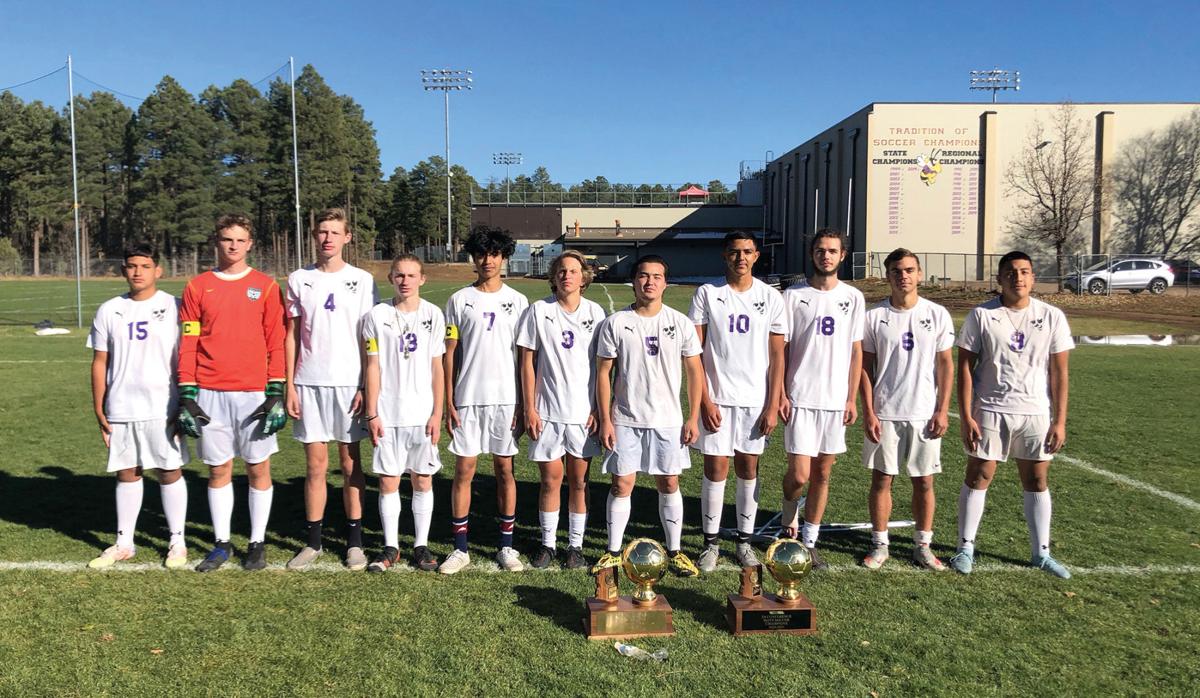 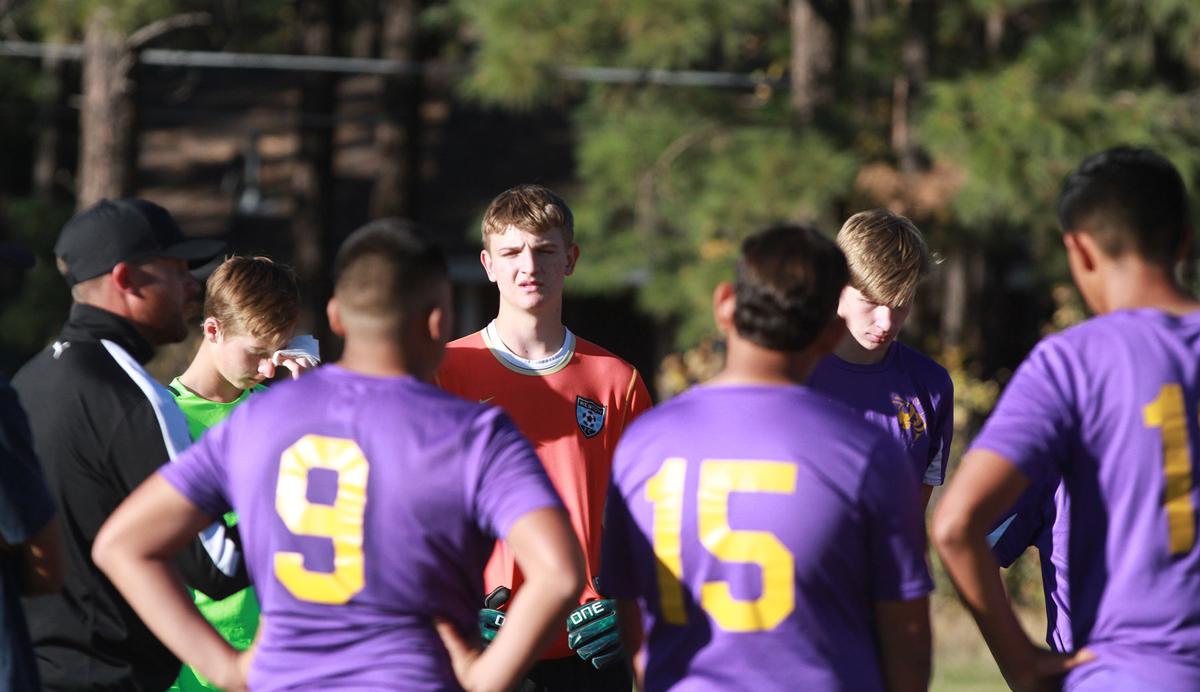 Senior goalkeeper Andy Plath (center) and the Yellowjackets have a pre-game talk before their first round game against Payson. Plath did not allow any goals by opponents once he returned from an ankle injury. 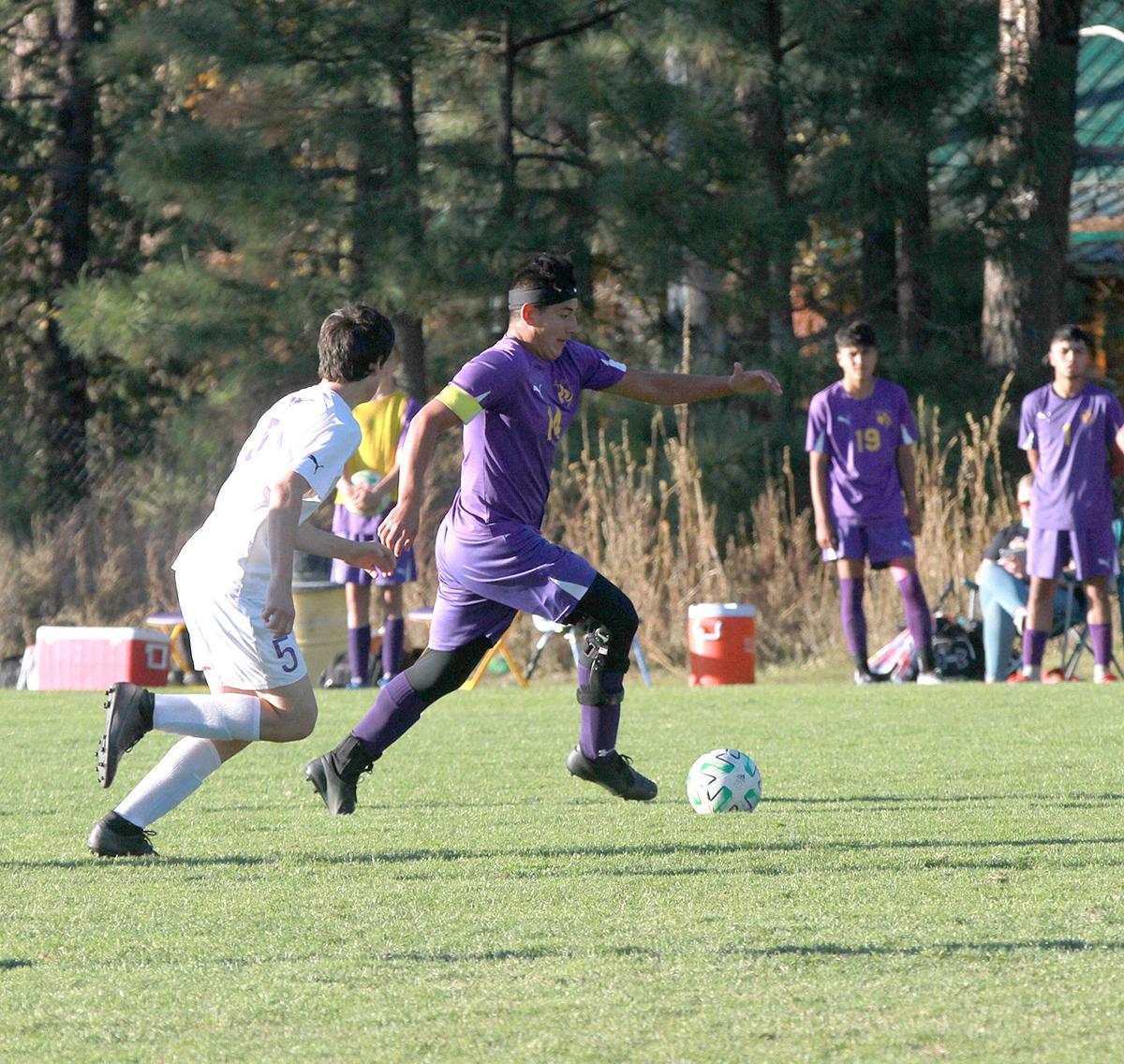 Blue Ridge senior striker Gustavo Cuiriz (7) and Payson senior Hunter Lee converge on the ball during the first half of the Yellowjackets’ 1-0 win in the first round of the state soccer tournament on Wednesday, Nov. 4. Blue Ridge went on to defeat Show Low, 2-0 in Friday’s semifinals and Chino Valley, 4-0, in Saturday’s final in Scottsdale to win the state championship.

Senior goalkeeper Andy Plath (center) and the Yellowjackets have a pre-game talk before their first round game against Payson. Plath did not allow any goals by opponents once he returned from an ankle injury.

But the team appeared vulnerable just a couple of weeks earlier. The Yellowjackets suffered a 3-0 loss to cross-town rival Show Low on Oct. 21. It was the second loss of the season for Blue Ridge and the first since a 3-0 loss to Chino Valley on Oct. 1.

However with the return of senior goalkeeper Andy Plath, thought to be out for the season with a broken ankle, and a couple of position changes, things soon fell into place for the final regular season game on Oct. 24. Cesar Bonilla, a junior who kept goal during Plath’s absence, returned to midfield, enabling midfielder Micheal Littleman, a senior captain, to focus on defense.

“This team learned a lot about perseverance,” said Blue Ridge first-year head coach Kirby Elkins. “They learned about getting through obstacles we didn’t think we had.

The Jackets never gave up a goal after that. Blue Ridge defeated Camp Verde 2-0 in the regular-season finale and secured the No. 2 seed in the state playoffs.

Blue Ridge defeated No. 7 Payson, 1-0, in a first-round game in Lakeside on Nov. 4. Canyon Brosemann, a senior, scored the Jackets’ goal in the second half.

“We missed some opportunities in the first half. Payson played well. It was a tough one to get and I’m happy to get it.,” Elkins said. “That left the two teams that beat us standing in our way. That was the way we wanted it.”

The win against Payson set up a Blue Ridge-Show Low semifinal during the final weekend of the playoffs at Scottsdale Coronado High on Nov. 6.

Gustavo Cuiriz, a senior captain, scored both goals in the game as the Jackets defeated the Cougars 2-0 to advance to the title game for the 11th time in the past 12 years and for the 18th time in school history.

“Against Show Low I thought we absolutely dominated,” said the coach. “Gus had an incredible game. Our defense was phenomenal and we got the win.”

Blue Ridge met No. 1 Chino Valley, the only other team to defeat the Jackets in 2020, in the final at Coronado High on Nov. 7. Chino’s Cougars, in their seventh championship match in the past eight years, were hoping to win the school’s seventh state title.

Bonilla scored a goal about four minutes into the contest and sophomore Luis Perez scored later in the first half to make it 2-0, Blue Ridge. Brosemann added a goal in the second half and Cuiriz put in the dagger with a final goal as the Jackets won 4-0 and finished 18-2 on the season.

“We got our redemption against Chino. We also dominated that game,” Elkins said. “Our passing was phenomenal. Our guys just had the hunger to win. We wanted the title badly.”

Elkins said his team was fortunate to get all its players back from injury to finish the season.

“We had an incredible amount of injuries this year,” said the coach. “We got our full squad back a week before the playoffs for the first time this season and summer workouts. That was a blessing.

“After the Show Low game things really changed,” Elkins said. “When you are young and are going for a championship, you have to peak at the right time, and we did.

“The way they responded to the two losses – it could have gone either way. They could have kept their heads down,” said the coach. “They not only wanted to win, but win in a dominant fashion. It showed in taking care of Chino like we did. They are very good. It was just our day. I’m proud of the way we responded.”

Elkins praised his squad for making sacrifices to benefit the team.

“Talk about overcoming obstacles. Andy Plath broke his ankle. Within five weeks he was almost 100%,” Elkins said. “It shows his work ethic. He’s our backbone for this squad. Once he came back, we got four clean sheets in a row. He didn’t let in a goal. He returned for the last regular season game.

“Getting Cesar back in midfield changed our offense and how we pass,” said the coach. “He’s very smart. He puts players in the right position to score. Gustavo moved to striker when he got healthy.

“The one who really sacrificed was Michael Littleman. Last year he was Offensive Player of the Year and first-team all-state. Offensively he made everything go, he was the facilitator. He’s coming off an ACL injury and it took some time for him to return to form. So he played defensive midfield instead of offensive middle. When I proposed that to him, he said, ‘I got you coach.’ The Sanchez kid, he shut him out of the game. When he had to play defense he came through. That shows you he is a true leader,” Elkins said.

The title is the 11th for Blue Ridge in the 27-year history of the state fall soccer championships.