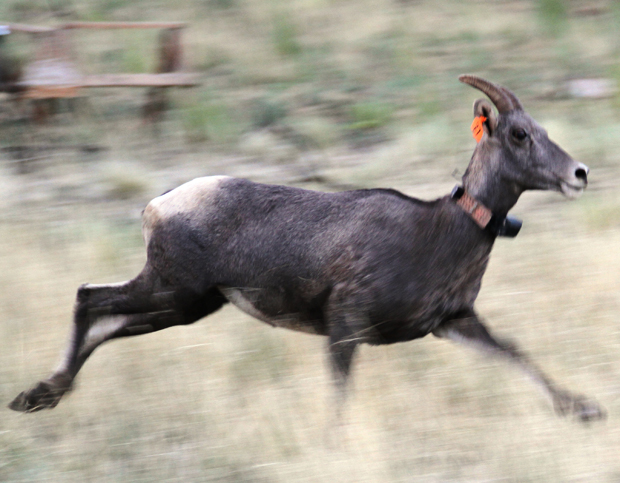 Female Rocky Mountain bighorn sheep as it is released in the south fork I the Little Colorado River. 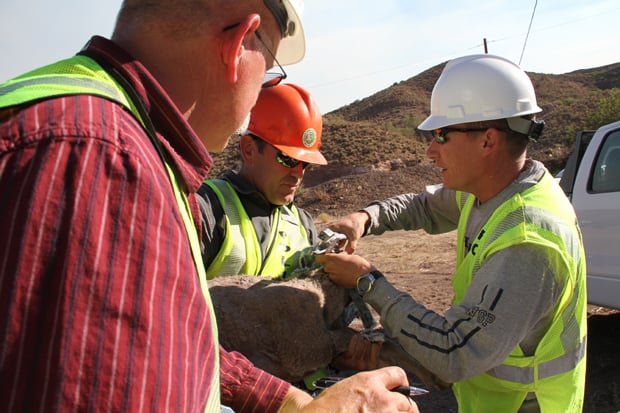 Biologist from Arizona Game and Fish places ear tags in all the sheep for later identification. 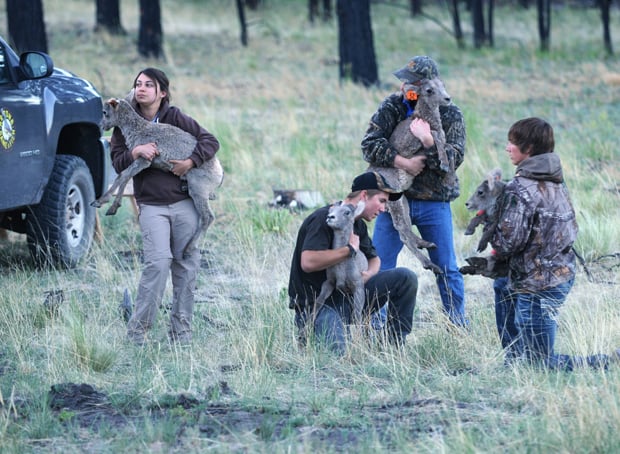 Lambs were held by Arizona Game and Fish staff then released as the adult females were allowed to jump from the trailer so they could all leave as a herd.

Female Rocky Mountain bighorn sheep as it is released in the south fork I the Little Colorado River.

Biologist from Arizona Game and Fish places ear tags in all the sheep for later identification.

Lambs were held by Arizona Game and Fish staff then released as the adult females were allowed to jump from the trailer so they could all leave as a herd.

EAGAR — Twelve Rocky Mountain bighorn sheep are now exploring new territory on the Apache National Forest in eastern Arizona, announced the Arizona Game and Fish Department (department). The sheep were captured June 25 using a drop net on the Morenci Mine property, owned by Freeport McMoRan, Inc. (FMI), in southeastern Arizona, in cooperation with mine officials. All of the sheep were released in good condition the following day near the South Fork area of the Little Colorado River.

This translocation is the first of several planned efforts over the next few years, and is part of the department’s Morenci Mine Rocky Mountain Bighorn Sheep Management Plan. The plan includes the capture of surplus bighorns in the mine area to use as source stock to establish new herds in suitable, historic habitat in eastern and central Arizona, and to augment existing populations that are below desired population levels.

“A local landowner previously found two sheep skulls and skeletons in the Little Colorado River area, so we know the species historically inhabited the area. Examination of one skull dated it to Arizona’s pre-settlement era,” says Diane Tilton, spokesperson for the department’s Pinetop regional office.

The South Fork location was evaluated in the early 1990s for its suitability as bighorn habitat, and it has now become a priority site for an initial release and establishment of a new bighorn population.

Beginning in 2002, the department began using bighorns from the Morenci Mine as source stock for translocations. Between 2005 and 2007, several capture operations occurred on the mine with the sheep being translocated to West Clear Creek in Game Management Unit 6A. These efforts were very successful, and with the ensuing population growth, the department was able to offer four hunt permits for rams in 2014.

Even with removals over the years, the population is thriving on the mine. The population requires active management to reduce the hazardous conditions sheep cause for motorists when they cross State Highway 191. In the past 12 years, nearly 200 sheep have been killed on the highway, which bisects the mine, and on adjacent, active mine roads.

“It is a high priority for the department, FMI and Arizona Department of Transportation to reduce vehicle-sheep collisions. Translocating bighorns from the mine area is one of the strategies the department uses to create safer roads for wildlife and motorists,” says Tilton. Plans for future translocation release sites include supplementing the existing bighorn sheep herds in the Foote Creek and Black River herds in eastern Arizona. At least 10 rams, the core of the Black River herd, died in the 2011 Wallow Fire.

Funding for the bighorn capture and translocation efforts comes from Arizona Game and Fish funds that are supported by hunter dollars and donations; the department’s Special Tag Fund supported by the Arizona Desert Bighorn Sheep Society; and, funds from the Pittman- Robertson Federal Aid in Wildlife Restoration Act of 1937 that is administered by the U.S. Fish and Wildlife Service and supported by hunters through a special excise tax on hunting and camping equipment.