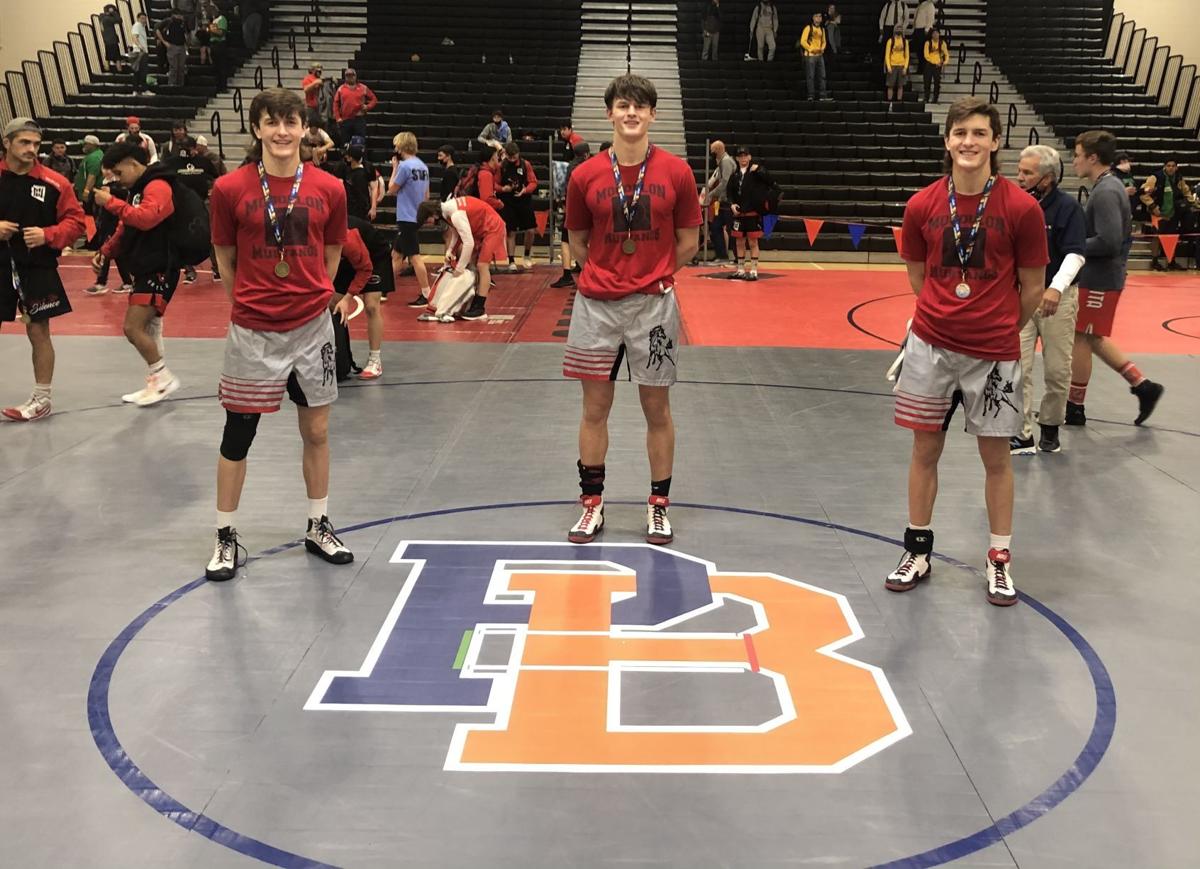 Mogollon wrestlers, from left, Cael Porter, Fisher Porter and Malaki Porter stand on the mat at Poston Butte High School with their first-place medals at the Division 4 state tournament March 18. Their grandfather called them “the Porter Boys” on the PB mat. Below, St. Johns’ James Thomas celebrates winning the 170-pound state championship on March 18 at Poston Butte. 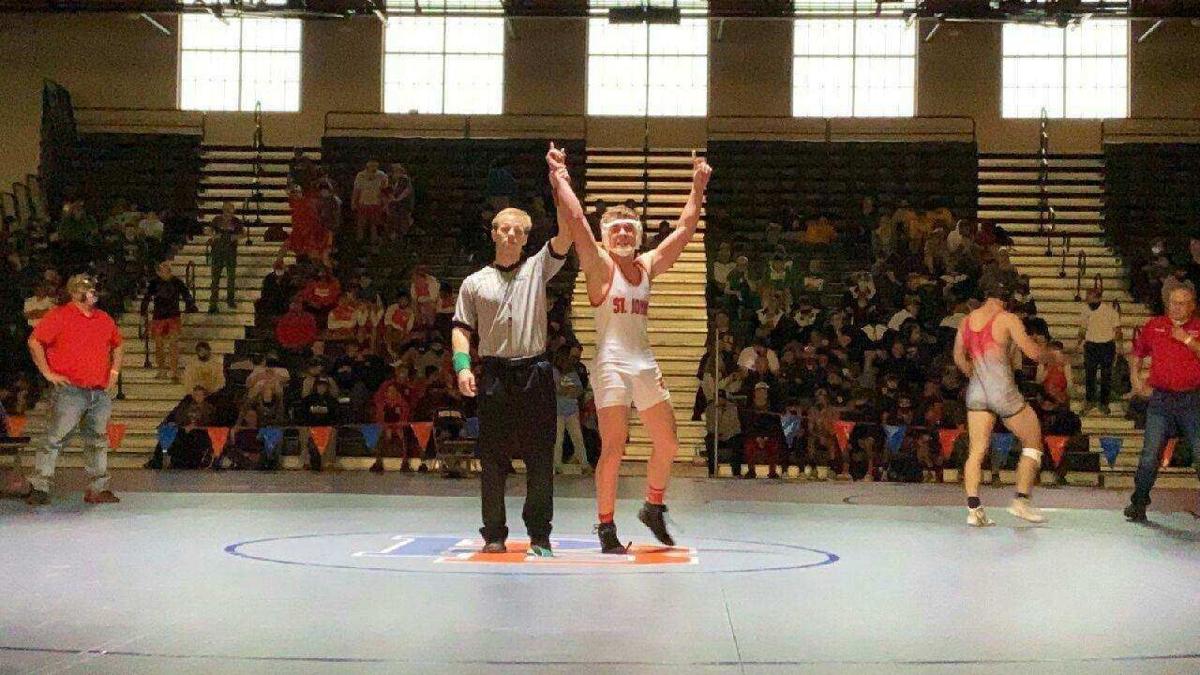 Mogollon wrestlers, from left, Cael Porter, Fisher Porter and Malaki Porter stand on the mat at Poston Butte High School with their first-place medals at the Division 4 state tournament March 18. Their grandfather called them “the Porter Boys” on the PB mat. Below, St. Johns’ James Thomas celebrates winning the 170-pound state championship on March 18 at Poston Butte.

Porter, his twin brother, Malaki, and their cousin Fisher all won Division 4 state titles for the Mustangs on March 18 at the state tournament held at San Tan Valley Poston Butte High School.

The three boys, all juniors, have been wrestling since they were babies, said Mogollon assistant coach Reed Porter, the twins’ father and Fisher’s uncle.

“If you ask my wife, they were wrestling in the womb,” said Reed, also the principal at Mogollon Junior/Senior High School and a longtime wrestling coach.

“I coached junior high wrestling here for probably close to 20 years, and from the time that any of my kids could basically walk they were at practice with me. The first word they could spell was Mustangs because we did Mustang jumping jacks. They would spell that word out before they even knew how to spell their own name I think. They’ve been wrestling forever.”

Whether at home, at practice or in a regulation match, competition among the three has been fierce and serious, Reed said.

“When they were in peewee league — we’d go to some tournaments down in the Valley — they’d always end up wrestling each other in the finals. It was interesting because neither of the twins ever beat the other one twice in a row. It was always a back and forth. As the saying goes, iron sharpens iron, and they worked together well over the years to make each other better. And Fisher’s been right there with them. He’s gone to the same tournaments. He’s grown a lot more. He’s bigger in nature so he’s up a couple weights. They wrestle each other every day in practice as well even now.

In the 2020 tournament as a sophomore, Cael won in overtime and was the runner-up as a freshman; Malaki was second last year and third in 2019.

“I think it was a goal for all three of them to get there. I think Cael had a little more confidence going in to that. Malaki, when he took second last year, it lit a fire in him. He’s just been a workhorse, doing a lot of extra stuff. All three of them have been running home after practice rather than driving home, extra sprints in the hallways at school, just the extra things that build mental confidence.”

Winning was exciting for each of the Porters individually, of course, but they were also just as happy for the other two, Reed said. They also got to splurge by ending their abstinence from sweets, which serious wrestlers avoid during the season.

“It was a family affair kind of thing. It was pretty cool. When Cael won, he was the first one from our team out there wrestling, he was extremely excited. When he won he came over and gave me a hug in the corner, and my brother who’s a coach, but the cool thing was he immediately ran up into the stands and found my wife and went and gave her a big hug.

“The cool thing after that was after Malaki won he was — they were pretty strict about who got on the edge of the mat – but he came down. These guys, they do a little sacrifice. They don’t drink any soda during wrestling season. It’s been a tradition we’ve done for years and years and as soon as Malaki won (Cael) was on the corner of the mat and he had an ice-cold Dr Pepper for him and gave him a big hug. So that was kind of a cool experience. They get super-excited for each other. Same thing for Fisher. When he was done wrestling – a big hug from both of them. Huge celebration.”

As a coach and father, watching his sons and nephew excel made Reed burst with pride, especially since in last year’s tournament his twins and their now-graduated brother, Timmy, all compete. But only Cael earned a first-place medal.

“It’s awesome. Pride kind of gets a bad rap, but I’m very proud as a father to see them accomplish great things, but more than anything to see them both on and off the mat being good kids,” Reed said. “It was a top 10 moment for me as a father to have two of my sons win a state championship and a nephew win it. Last year was a heartbreaker. I wanted to be happy for one but just felt terrible for the other two that lost. This is good relief this year when all three of the win. It’s a much better feeling.”

In the 132-pound finals match, Cael was matched up against a familiar and neighboring opponent — Wesley Scarbrough of St. Johns.

“They wrestled earlier in the year and Cael won 4-1 or something like that so we knew it would be a tough match going into it. But Cael handled his business and ended up beating him 10-0 in the finals,” Reed said, adding the two wrestling programs share a lot of camaraderie.

“The wrestling community is pretty tight. All the coaches, we understand what these kids go through day to day, so there’s a lot of respect between coaches. A lot of coaches reached out, congratulated us, me as a father, talking about how neat it was to have two boys win it. It went both ways. I was extremely pleased with Morenci, they had five state champions, St. Johns was very gracious and very kind to us, and we told them how great that Scarbrough kid was. It’s a lot of respect. It’s hard when you lose and be happy for them but at the end of the day you know that they’ve worked just as hard as anybody else and they’ve earned it at that particular moment and as coaches we congratulate them.”

The Mustangs also had Payton Reidhead earn sixth place in the 138-pound class and Kaige Reidhead fourth place at 120.

St. Johns’ Thomas had no doubt

James Thomas from St. Johns faced last year’s state title in the 170-pound final at the Poston Butte tournament but left no doubt who was the better wrestler this season.

“That’s a really good kid, obviously as a returning state champion. James controlled that match from the get-go, was never in jeopardy,” St. Johns coach Brandon Crosby said. “He just controlled the entire thing and that’s kind of how he was this whole season. James did a ton of work in the offseason in the weight room. At the state tournament he controlled every match, never had any hiccups or anything in a pretty competitive weight class.”

James leaped from the 145-pound class to 170 this year and finished undefeated in 18 bouts. But overall the Redskins suffered through a difficult season, Crosby said.

“The season was pretty frustrating. Usually we get 50 to 60 matches and these kids would have really come along because they came in and went right to work. They worked hard and I didn’t have to push them a whole lot. So that was frustrating that they didn’t get the opportunity to have the kind of tough, normal season that we usually have because they would have excelled. But considering what it was we were glad to be able to wrestle. I thought they did really good. We went 9-3 in the duals. We had three tough duals with some schools that we lost. I thought our showing at the state tournament was pretty good. We had some kids that really stepped up and rose to their potential.”

Scarbrough, who fell to Cael Porter in the finals, also was a standout wrestler for the Redskins, Crosby said.

“He had a great season too. He had only two losses on the year. He just really bloomed. He really came along this year. He improved greatly and was a great competitor for us. We also had Ren Crosby place third for us down there. This was only his second year of wrestling. He was a pleasure to coach. He came out and worked his tail off and really did a great job for us as a senior,” Crosby said.