Log In Sign Up
You are the owner of this article.
Edit Article Add New Article
You have permission to edit this article.
Edit
Home
Local
WMITV
Sports
Police
Opinion
Obituaries
Public Notices
Entertainment
Community
Classifieds
COVID-19
1 of 3 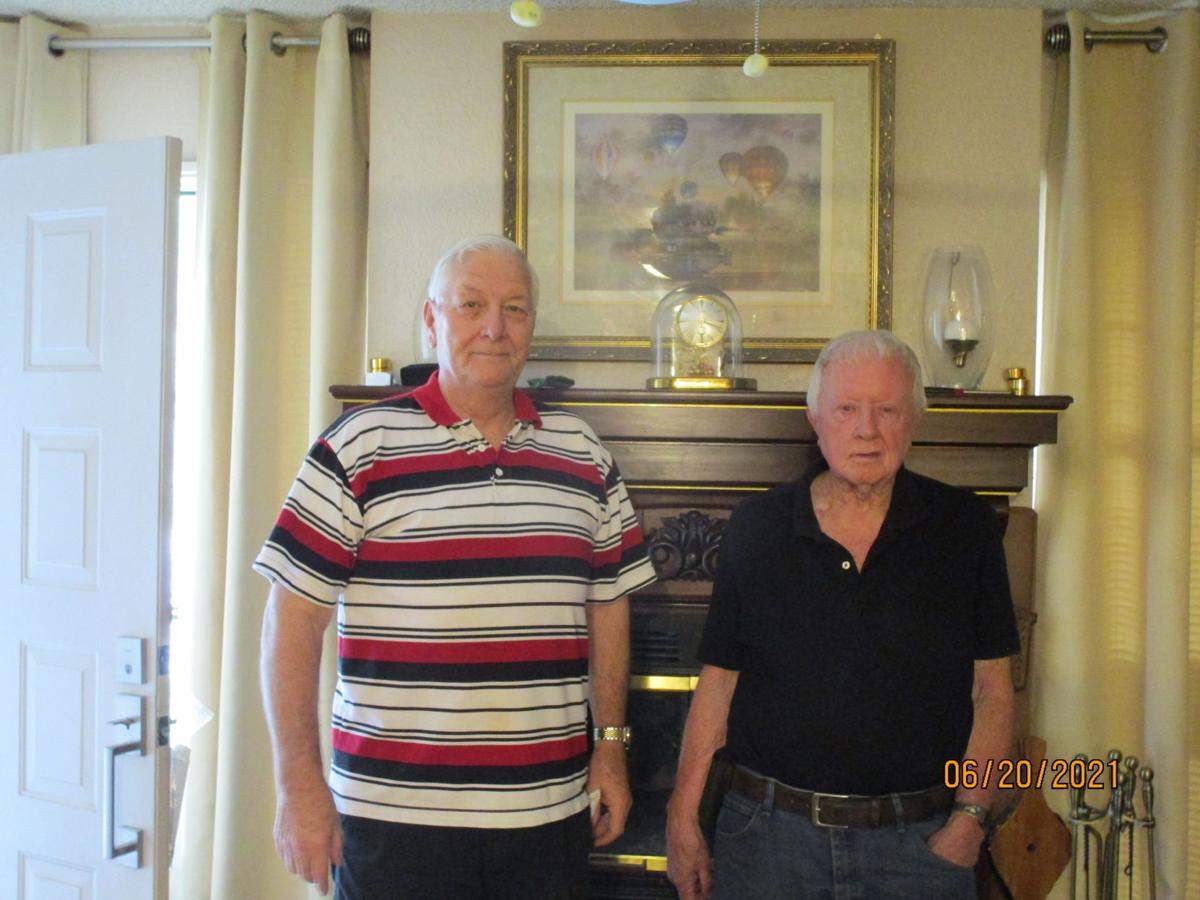 Don Woodward, right, and friend J.D. Zinke have been seeing interesting things flying over Show Low and the White Mountains at night. Woodward reports seeing ‘UFOs over Show Low’ more than 200 nights in the past year. 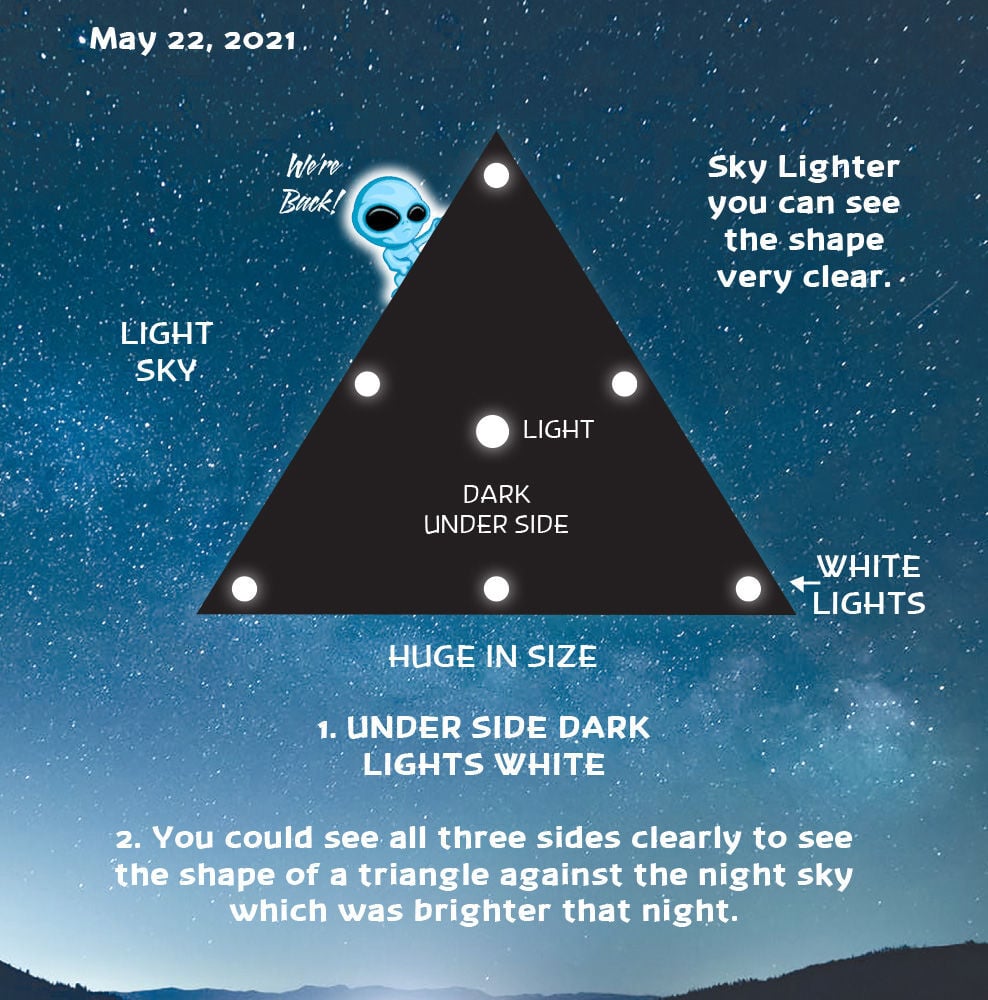 Don Woodward made a drawing this graphic was based on the night of May 22. He made several drawing to describe what he is seeing over Show Low and the White Mountains at night.

Don Woodward, right, and friend J.D. Zinke have been seeing interesting things flying over Show Low and the White Mountains at night. Woodward reports seeing ‘UFOs over Show Low’ more than 200 nights in the past year.

Don Woodward made a drawing this graphic was based on the night of May 22. He made several drawing to describe what he is seeing over Show Low and the White Mountains at night.

Editor’s note: This is the first of a three-part series about “Unidentified Flying Objects” or “Unidentified Aerial Phenomena” reported in the night sky over the White Mountains.

SHOW LOW — Some people might think 83-year-old Don Woodward is seeing things that aren’t there, but he’s confident that unidentified flying objects (UFOs) are usually flying over the White Mountains.

In fact, Woodward has closely detailed sighting a “triangle pattern” of UFOs and their “mother ship” flying in the area for more than 200 nights in the past year.

Woodward credits his many sightings of UFOs on his inability to sleep for more than a few hours at a time.

“I spent endless hours on this UFO subject to make sure it is what I call ‘Real UFOs Over Show Low.’ Well they are real UFOs, not a fairy tale,” Woodward stated in a written submission to the Independent. “I have now been watching these three triangle-shaped UFOs for over a period of 10 months on my many trips to Fort McDowell to play roulette.”

Woodward was not alone when the UFOs were seen as he was traveling with a friend, J.D. Zinke.

“We made 44 trips trips to Fort McDowell over the period of these 10 months. On our trip on May 3, 2021, when we were between Heber and Show Low, we noticed that particular night all these UFOs were in the same area close together,” Woodward writes. “One of them was low and you could see the lights clearly. It was on the right side of the highway. You could see it like more of a side bottom view. J.D. stopped his Toyota SUV and took out his binoculars.”

Zinke told Woodward he could see white, blue and red lights on the UFO. Woodward stated he had seen only white lights — never colored lights — on the UFOs he saw.

“But through the binoculars there could be some smaller lights that would be blue and red,” he wrote.

While many people have been reporting lights in the sky often linked to the Space X satellite system, Woodward does not believe the UFOs over Show Low are related.

During the period of May 19-21, Woodward closely detailed his sightings.

Woodward wrote that it was a clear night on May 21 and he could even see the “bottom of the craft.”

He said it was low but he had no idea of what altitude it was flying at “but it was very big in size,” he wrote to the Independent.

Woodward stated: “They are visible almost every night. They do move around.”

“You could see all three sides clearly and see the shape of a triangle against the night sky, which was lighter that night,” Woodward stated in his letter to the Independent.

He stated that saw the UFO triangle over Fool Hollow Lake four nights in a row from May 25-29. All of the sightings were between 8 and 9 p.m., according to Woodward.

On May 28, Woodward wrote, “I now have seen it most every night except when it is cloudy, over 200 times. It seems to stay in the same general area all of the time. It moves around in what I call the general area of Show Low. It stays high most of the time. In two occasions I caught it low over Show Low and could actually see the triangle shape very clearly and count lights on the bottom side.”

Woodward made a diagram in his letter noting that a jetliner usually flies at about 35,000 feet and he believes the “triangle” flies at about 80,000 feet on normal nights.

On May 29 he noted, “I took the visual distance of the ground level and the jetliner that flew over yesterday and tried to put the same distance above it plus one-third more, reaching my conclusion.”

He had an even closer experience on the night of May 30.

“After 8 p.m., I went outside to see if the UFO was back. Well it was right over the town of Show Low. I could see it clearly, the bright seven white lights and I could actually see the shape of the triangle. It appeared right overhead.”

He wrote that night that there was a second triangle.

“It wasn’t alone either this night; there were two UFOs. The second over my right side. I could see the seven lights — no mistake about it. I have viewed these UFOs so many times. If they are out, I can find them,” Woodward wrote.

He continued in his letter to the Independent to note sightings again on May 31, June 1-2, June 5-6. He stated it was cloudy on June 3-4.

In a one-on-one interview with the Independent, Woodward said, “I just wonder why the hell it is here every night. I’ve been watching this thing for a year now. I see them all of the time and they’re here every night. When it’s cloudy, you can’t see them.”

He said he’s tried to photograph them using a camera phone, but it just doesn’t work.

Woodward said he’s currently trying to write a book about the “UFOs Over Show Low.”

“I’m trying to get this down because I know it’s real. That’s why I’m doing it. This isn’t a made-up, hokey-pokey story, like you hear about on TV. They make up a series and it’s gone that night and it’s never coming back. This thing is here every night. … It does all different things — it’s real. I wonder about the things that go on TV. This is more real than what I have seen on TV,” Woodward said.

Many people might think that Woodward, at 83, has lost his mind as he’s out looking for UFOs most every night.

“I don’t care. I just went through that with a person. I pissed them off and I haven’t seen them in five days. It’s a UFO — no doubt in my mind. It’s aliens. It’s not Russian, it’s not China and it’s not ours. Maybe we are a food supply for future use. I don’t think they’re friendly and I think they’re sneaky because you never see them in the daytime. As soon and it starts getting light they’re gone,” he said.

Woodward lives in the Fool Hollow area and often sees the UFOs to the southwest, directly over Show Low. He often calls Zinke to confirm sightings at night, as Zinke lives in central Show Low and he reports seeing the triangular-shaped craft to the northwest. It is often located between the two men’s houses.

“J.D. lives on the other side. One night I called him and we saw three of them. Sometimes it’s not just one. I’m looking towards Show Low and they move all over. They usually stay in the general area,” Woodward said.

Almost everyone I know has experienced something they can't explain and I hope this gentleman knows he has lots of company. Besides, this is the best advertising that guy in Heber who carves aliens is ever going to get.

In 2006 my self and xxxx Watson junior had a ( face to face) / up close encounter .befor that I figured they were real,but could of cared less either way.after that,little rick and I get to go to our graves knowing what happened,and that they are very,very real.but the more I looked into it,I would say 1 out of 50 on the mountain have had a up close encounter.one person (8) members of thier family were present,and he said things that only someone who witnessed what we did would know.if Watson wasn't with me,I would of never told a soul.but since he was,I simply call the facts for what they are.i looked at this article and considered it a information dump,because if Watson and I were literally feet away from real life space alien type of situation.to terrified to turn and run.then I'm positive that many more people than us have had similar situations.