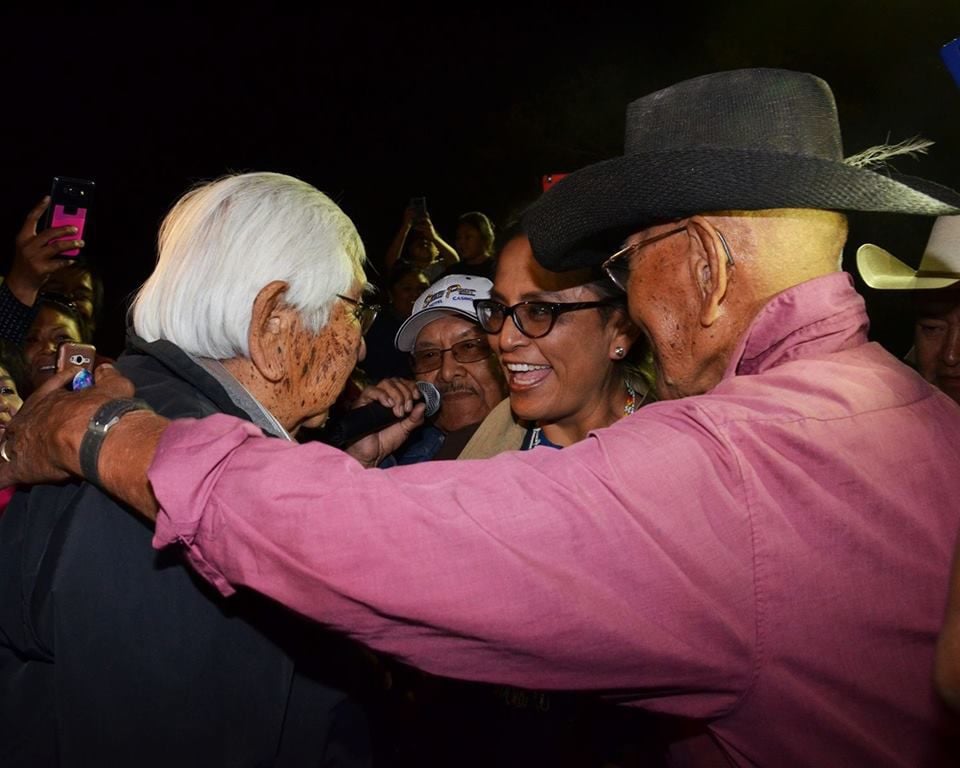 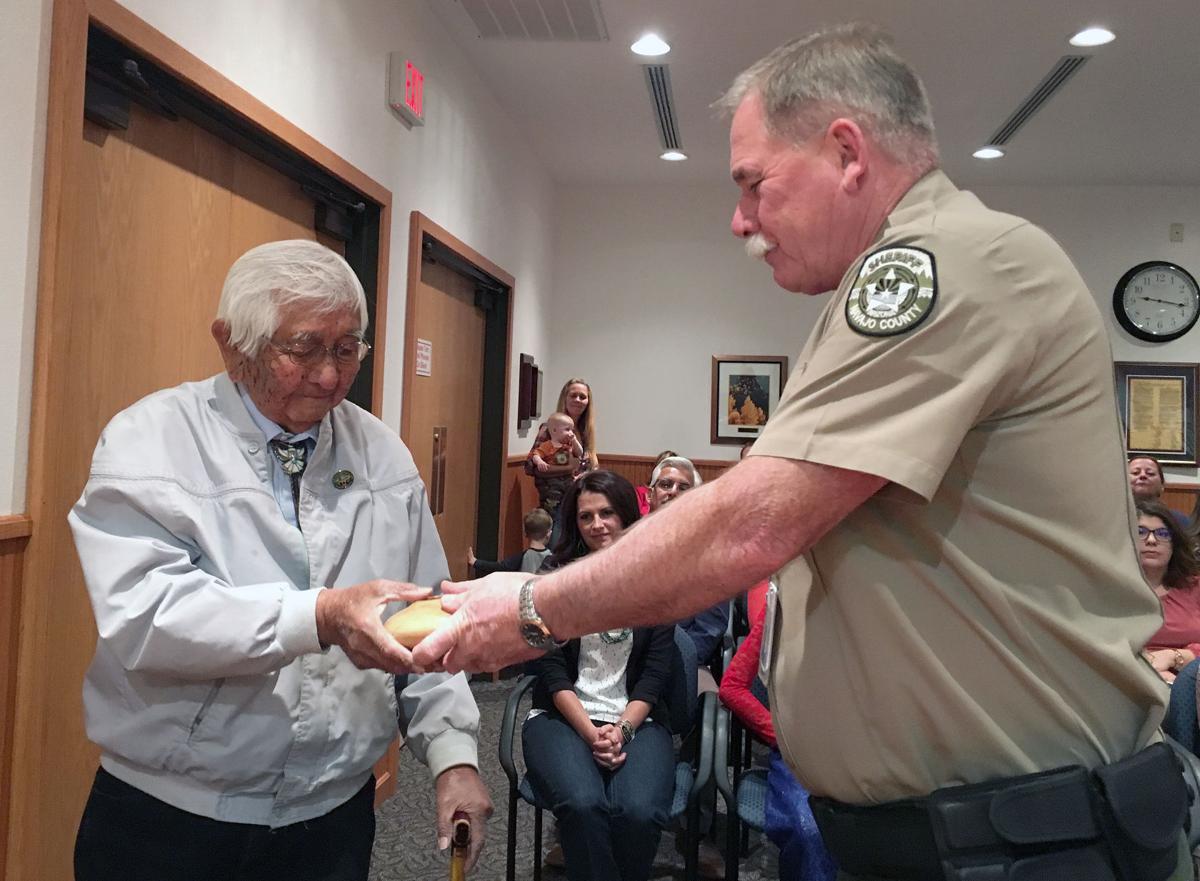 White Mountain Apache Tribe Chairman Ronnie Lupe, was honored last year by the Navajo County Board of Supervisors. Lupe, at left, is presented with a gift for his many years of service as a Navajo County leader. The gift was presented by Navajo County Sheriff K.C. Clark.

White Mountain Apache Tribe Chairman Ronnie Lupe, was honored last year by the Navajo County Board of Supervisors. Lupe, at left, is presented with a gift for his many years of service as a Navajo County leader. The gift was presented by Navajo County Sheriff K.C. Clark.

WHITERIVER – The White Mountain Apache Tribe made its own history Wednesday night when its people elected their first-ever tribal chairwoman.

Gwendena Lee-Gatewood, executive assistant to the tribal chairman and the tribe’s public information officer, won WMAT’s popular vote to lead the tribe for the next four years, beating challenger and current Vice Chairman Kasey Velasquez by 224 votes. The unofficial final tally had Lee-Gatewood with 2,510 votes to Velasquez’s 2,286.

“I am truly honored that the tribe has spoken,” Lee-Gatewood said Thursday morning. “I want to congratulate my opponents (and their supporters) for a hard-fought race.

“This election is historic because it’s the end of one era and the beginning of another, a time when women’s voices are being heard and taking on leadership positions, a time when technology allows real-time communication, which is important for our tribal members who may not live here, but abroad who can be engaged in the government process through active communication,” she added. “We are now a part of this. Our ancestors marked the path and led the way; ours is an obligation to enlarge and broaden our future.”

It was a huge turnaround from February’s primary election when Velasquez edged Lee-Gatewood, 1,137-934. They were the top two vote-getters and advanced to Wednesday’s general election.

During her campaign, Lee-Gatewood garnered the support of several local leaders, but none was bigger than the support she received from her boss, outgoing Tribal Chairman Ronnie Lupe, the longtime leader of WMAT. Late last year, Lupe decided not to run for a 10th term in office.

“I want to thank my team who worked so hard and Chairman Lupe for his support throughout the campaign,” she said. “His leadership and legacy is humbling and I thank each of you who have prayed for me and wished our team well.”

She was out on the campaign trail every day – including weekends – stumping for votes all over the Fort Apache Indian Reservation and spreading her message of “It’s time to change the narrative.” Rarely, if ever, did she ever mention the possibility of becoming the first elected female leader in the long history of the White Mountain Apache Tribe.

She, like Velasquez, relied heavily on social media for spreading the word about their campaigns.

One of Lee-Gatewood’s main talking points was a plan for her first 100 days in office, in addition to performing regular tribal chairwoman duties. These initiatives include how she plans to start the processes to inspire Apache youth, create accountability, honor Apache culture, protect WMAT’s natural resources, use technology, increase tribal revenues and build employee morale.

“We have a lot of work ahead of us, work that needs to be done and we cannot slacken our pace,” she said. “I truly believe this election has not been about me, it’s about you – and I believe in you. You are the true heroes in your homes, in your places of work, in our schools, and in our community.

“Congratulations to all the candidates. God bless all of you and God bless the White Mountain Apache Tribe.”

For vice-chairman, Jerome Kasey III, who had been campaigning with Lee-Gatewood, easily beat Tony Alsenay, who had been running with Velasquez, 3,003-1,743.

“To God be all the glory,” Kasey III posted on his Facebook page. “He and He alone is worthy to be praised. 3,003 (votes) would of never have been possible but for the favor of God and his blessings.”

For tribal council, Districts I, II and III each had one seat available, while District IV had two seats up for grabs.

In District I, incumbent Travis Tessay defeated challenger Wilkie Gregg, 432-261, while in District II, another incumbent, Colleen Fazen, lost her bid for re-election as Renaldo Dazen edged her, 280-239.

In District IV, incumbent Alvena Bush and Gary Alchesay were the top vote-getters in a field of four candidates. Alchesay earned the most votes with 1,496, followed by Bush with 1,134. Alchesay will take the seat occupied by Kasey III, who was elected vice chairman.

Verna Westover received 998 votes and Robert Lupe 989 to round out the voting totals in District IV.

As of press time, the vote totals were unofficial. WMAT’s Elections Commission was expected to certify the vote at 1 p.m. Thursday. The Independent reached out to Velasquez for comment, but did not get a response by press time.

These are unofficial general elections results. WMAT was scheduled to certify results at 1 p.m. Thursday.

Congratulations on your achievement. Apache K9 SAR looks forward to working with you in all areas where we are needed.

I am very pleased with the outcome of the election, even though I had not vote, not a tribal member. Change is good for the tribe. I do hope that the tribe moves forward. Like the casino make over is past due and late, Hawley lake could be gold mine if properly run along with many other tourist industries they have to offer.
Best of luck to the new Chairwoman!!!